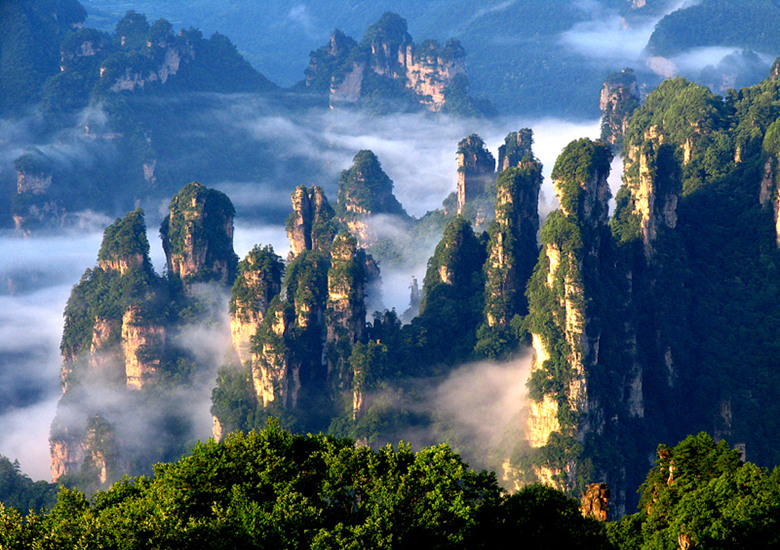 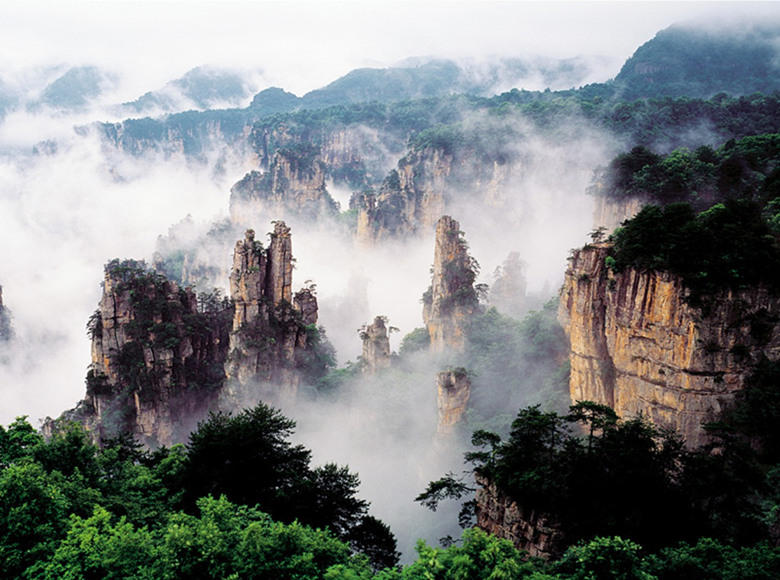 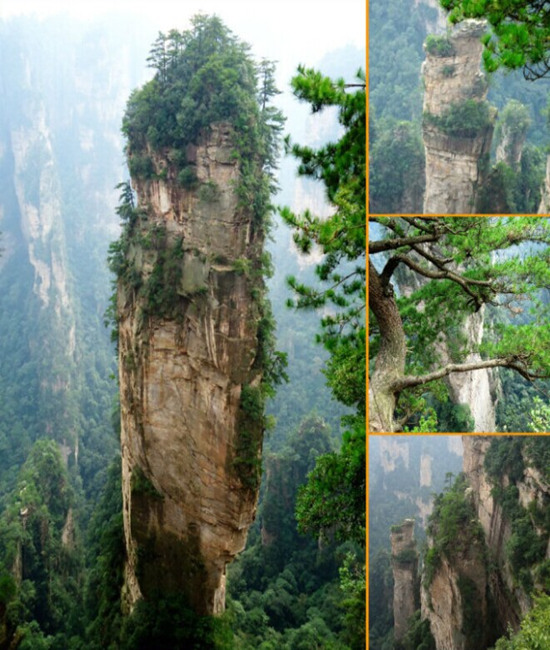 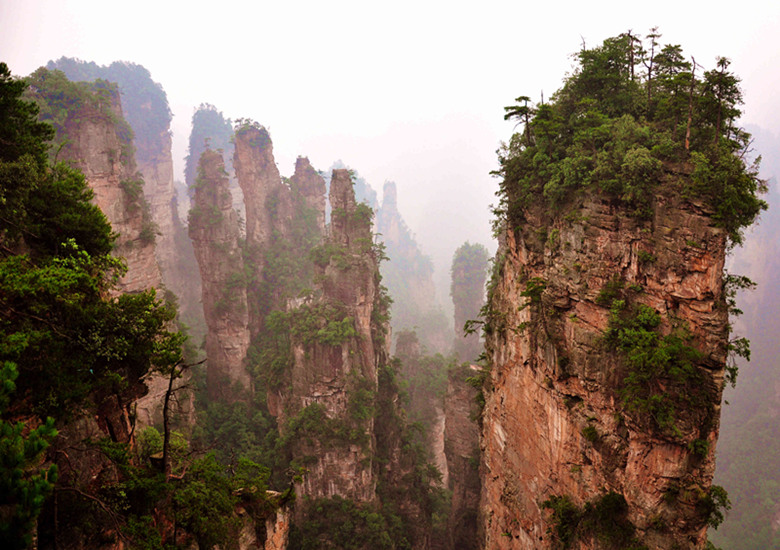 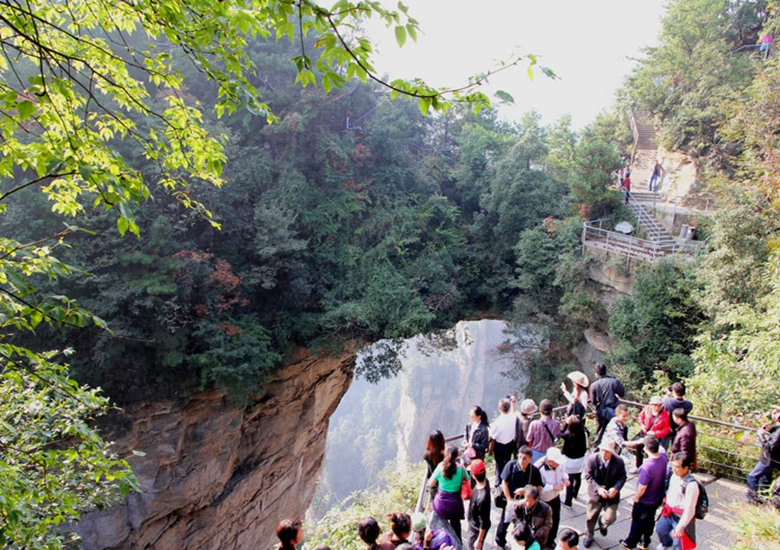 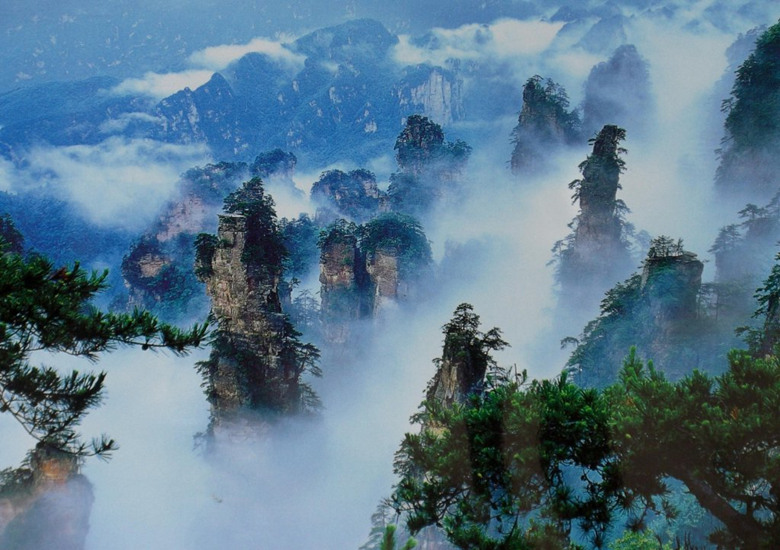 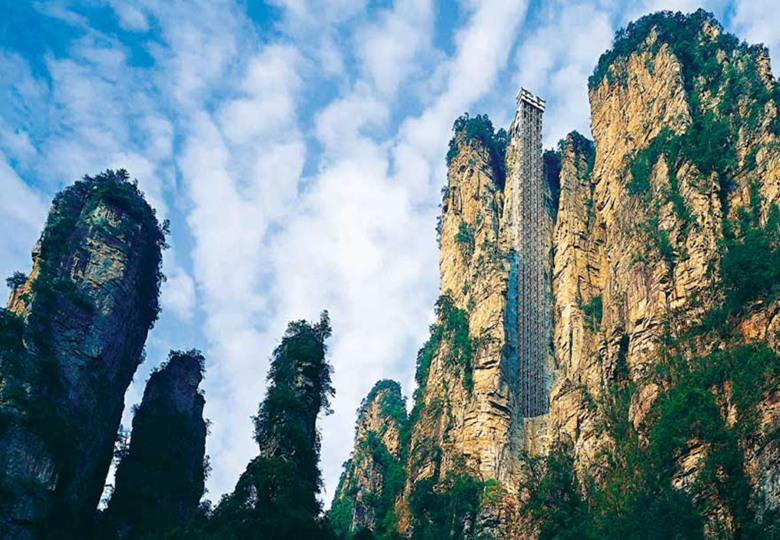 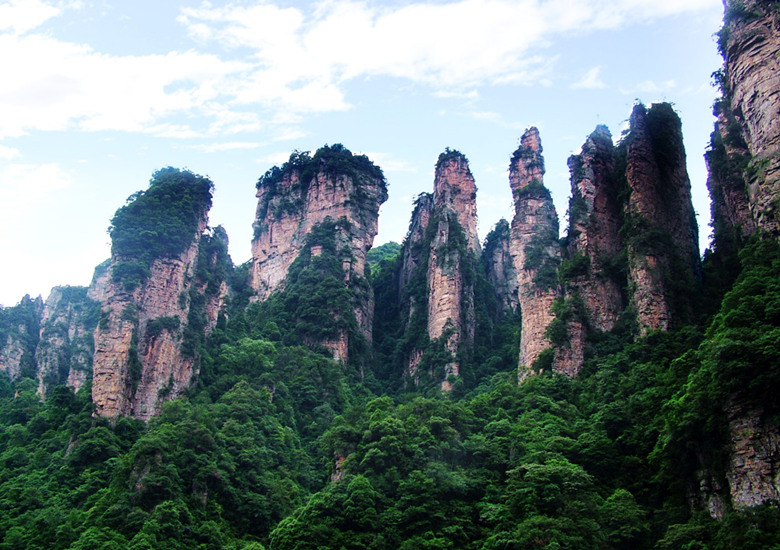 Yuanjiajie Scenic Area speaks for landscape
Yuanjiajie has long been known as a tourist destination in Zhangjiajie Forest Park. It becomes more popular as the Southern Sky Pillar inspired the floating mountains in the Hollywood blockbuster Avatar. What makes it stand out is that, peaks and pillars there are nearly at the same height, which makes Yuanjiajie Scenic Area a mountain platform great for enjoying sweeping vistas. It borders the Jingbian Brook (Golden Whip Stream) on the east, faces Yellow Stone Village on the south, opens to Tianzi (Son of Heaven) Mountain on the west and is adjacent to Suoxi Valley on the north.

Yuanjiajie Scenic Area is accessible by two ways from foot of mountains: one is walking through Luancuan Slop from Golden Whip Stream to Back Garden of Yuanjiajie; the other is taking the Bailong elevator, the No.1 elevator in the world, by trekking through the Baizhang Valley. When the elevator reaches the mountain top, Fields and Gardens in the Air will come into view. The mountain trail invites you to walk around the area and enjoy vistas.  Major highlights in Yuanjiajie Scenic Area includes Bailong Lift, Fields and Gardens in the Air, No.1 Natural Bridge under Heaven, Hanging Waterfall, Mihun Bridge and Tujia Village. 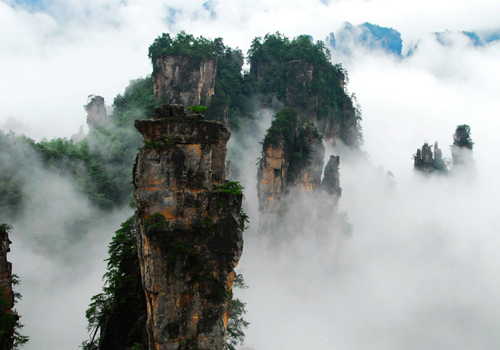 Bailong Lift
Bailong Lift looks like a giant dragon soaring up to sky. It was placed on the list of Guinness World Records for it is the highest and fastest elevator with the maximum loading capacity. The modern steel staff might be a bit incompatible with nature, though, standing at its foot, you will admire the power and wisdom of human being. It reaches the mountain top in two minutes; all people will be shock at the sights before eyes. All the mountains you have seen at the foot of them stand in arrays at your feet at the moment. Paddy fields and ethnic houses show up on a green hillside. 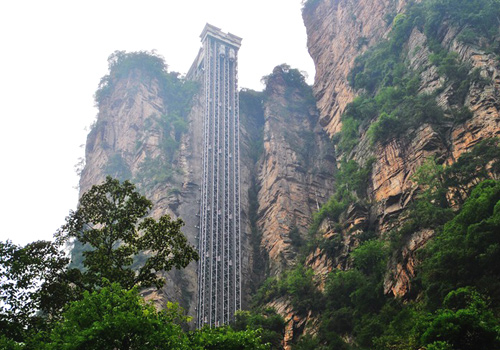 Breathtaking Mihun Stage
It is the optimum viewing platform in Yuanjiajie Scenic Area. As soon as you stand on the platform, your soul will be captured by the scenery before your eyes, hence the name Mihun Platform. Arrays of stone peaks stand out from deep valleys and soar up to sky, presenting a gorgeous view.

Back Garden
The Back Garden hides itself in the north part of Yuanjiajie Scenic Area. Walking through a green bamboo grove, you will find a giant rock that might block your way. But don’t worry; a moon-shaped white door awaits you just at the bend of the cliff. Through the gate, a cluster of jagged buttes jut out of deep valleys, like a natural garden from a panoramic view.

The No.1 Bridge Under Heaven 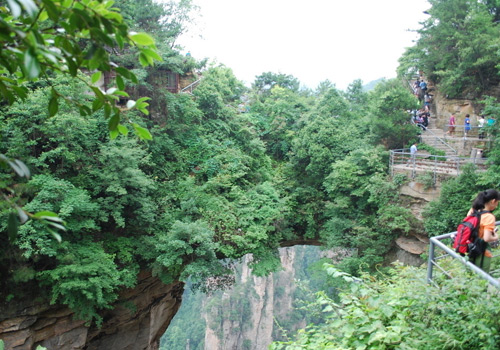 As one of ten wonders in Zhangjiajie, this sky bridge stretches across two mountains. It is uncommon for most of us to see a natural bridge surrounded by white clouds and oddly-shaped stone peaks. It spans over 25 meters with a vertical height of 357 meters, being a natural stone bridge with the maximum vertical heights in the world. In fact, the two mountains linked by the bridge were originally one mountain. The marvelous bridge was carved by the force of mighty wind and water.

Hanging Waterfall
At the end of Shan Dao Ditch, a hanging waterfall can be seen looking as if a white silk descends from heaven. When the water is at a peak, the spring abruptly plunges 200 meters to the bottom. The impact generates soaring mists and thunderous sounds that can be seen and heard from a distance.

Tujia Ethnic Village
Yuanjiajie Scenic Area offers far more than mountain views; it also shows tourists authentic folk color of Tujia ethnic group. Dozens of Tujia minority families live on the mountain top for generations. They are industrious and kind-hearted. Clusters of red peppers, sweet potatoes and potatoes can be seen on the walls of each houses, and bacon, cured fish and Tofu, sausages are suspended above Fire Pond where cooking takes place. 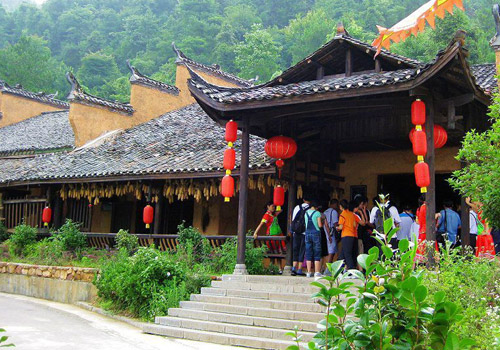 Goat Village
The Goat Village, located on a peak, faces the Back Garden from a distance. The peak rises 949 meters above sea level with an area of 3 hectares on the top. The village got its name because many wild goats frequently show up there. The peak is framed by bluffs on three sides and can be accessed from its north side. Its summit is covered with virgin secondary forest. Standing on the platform gives tourists a feeling like walking in clouds. A panoramic view reveals that the Jingbian Brook (Golden Whip Stream) is just like a green ribbon appearing indistinctly among peaks and valleys. During the days of Republic of China, the goat village is the nest of bandits. Ruins of gate, castle, moat, well and even mill can be found there.

Wulong Spring
Wulong Spring is concealed in a limestone cave. The cave’s mouth is one meters high and two meters wide. However, it is spacious inside the cave. The wall was eroded into stone flowers, stone peaks by running water. The bottom is jammed with stalactites that look like fishes, tortoises, dragons and horses.