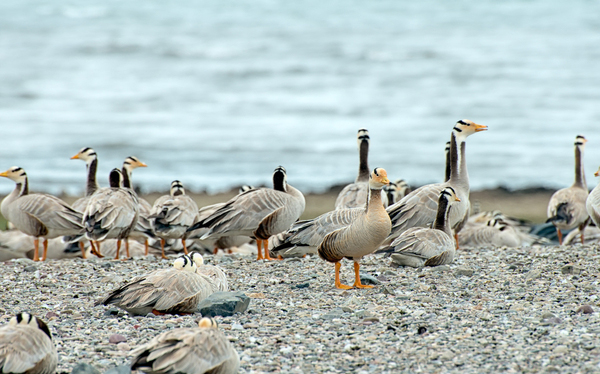 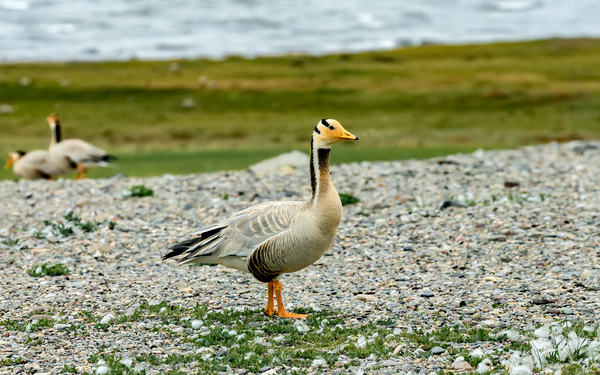 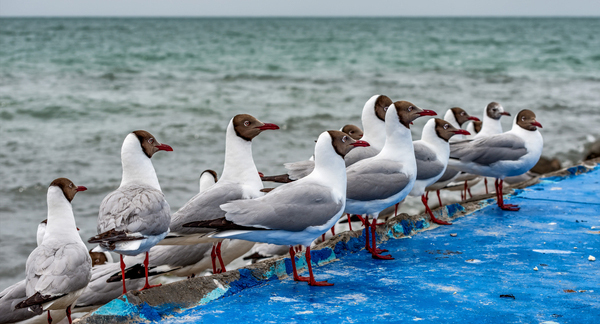 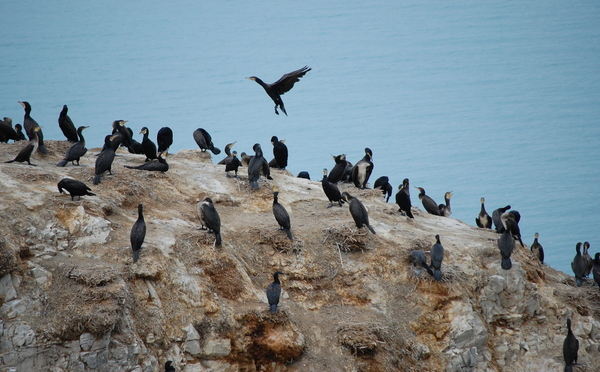 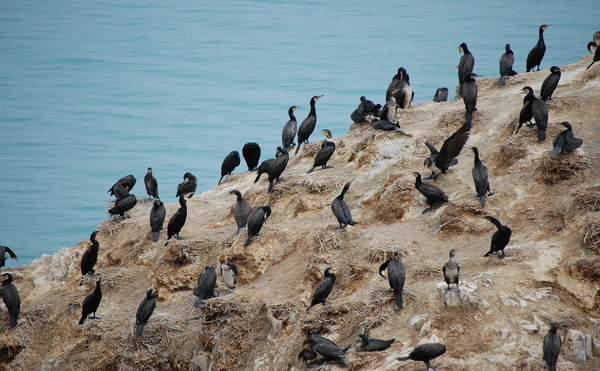 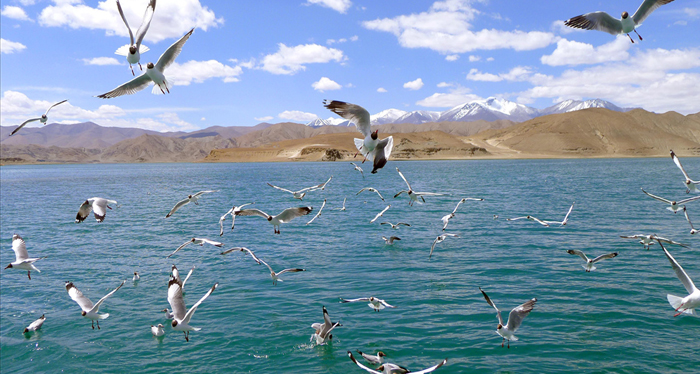 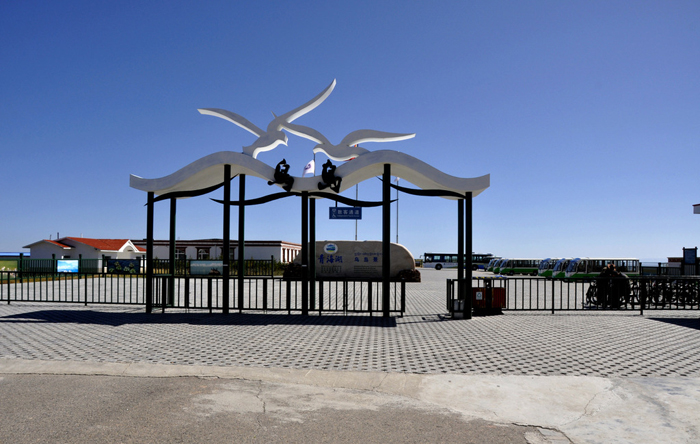 Chinese name: 鸟岛 (Niao Dao) Location: Situated in the west of Qinghai Lake, Xining City, Qinghai Province. Opening time: 07:10 - 18:00. Entrance fee: CNY115.
How to get there: It is very convenient to go to the island; you can go there by a sightseeing bus at Xining Railway Station at a cost of RMB35, or by a bus at the Xining Bus Station (250m south of the railway station) at a cost of RMB25. Best time for visit: Island Travel tips:   1. The island is equipped with hotels and restaurants as well as other entertainment facilities. It is very convenient for visitors to live in the island. 2. May, June, and July are the best months for visitors to go there and can see the birds flying in the quite blue sky.from May to July Bird

Situated in the west of Qinghai Lake, Bird Island covers an area of 0.8 square kilometers and it is the most noteworthy tourist attraction in Qinghai Lake. Bird Island, a natural residence for many kinds of birds, has been regarded as the top of the eight key bird natural preserves in China and it also has been listed as the state-level bird natural preserve in 1980. From May to July every year, a large number of migratory birds fly here to nest, lay eggs, hatch and raise their young bird, such as the spotted-head wild goose, the brown-head wild goose, the fish gull, the red sheldrake and the black-neck crane. The island has turned into the "Kingdom of Birds" in such months. It is said that when the birds are flying, the sky is covered to darkness, which is an awesome and magnificent picture of Qinghai Lake. For the professional bird-watchers, Bird Island is a paradise, but even the amateur bird-watchers also cannot help being deeply impressed with the sheer numbers of birds. Their constant buzz of activity, the din of their mating calls, their bickering over territory, and the shrill cries of their hungry offspring are the most melodious and sweet sound in the world for the bird-watchers and tourists. 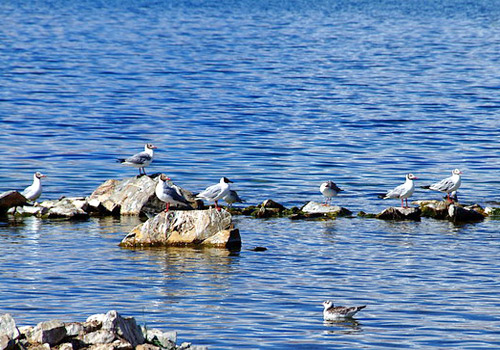 Why does Bird Island have become the ideal residence for so many birds? Mainly because Bird Island has a unique geographical conditions and a natural environment. With flat terrain, mild climate and luxuriant water plants and abundant supply of fishes in the lake around the island, Bird Island is a natural living and multiplying place for birds. Tens of thousands of migratory birds choose to live in this island. You can imagine that it is quite a grand spectacle of thousands of birds flying over the sky, with their nests thickly dotted and colorful eggs interspersed all over the island. It is magnificent and incredible and you should go there to experience it by yourself. 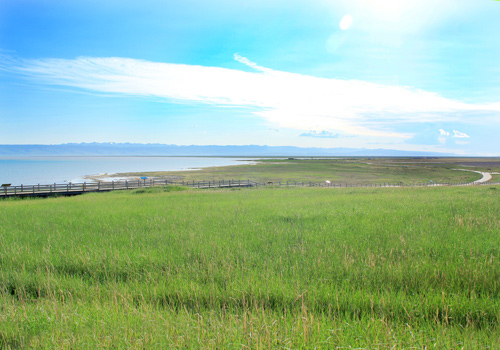 Bird Island consists of two islands: east and west islands. HaiXishan (mountain on the west of the sea) is also called XiaoXishan (small west mountain) where in April each year, albatross, seagulls and numerous other birds arrive here to lay eggs. In the birds' laying season there are tens of thousands of birds' eggs on the ground of the island. With eggs interspersed all over the island, Haixi Shan is also called “Egg Island”. With a total length of 1500 meters, Egg Island has an area of only 0.11 square kilometers before. But now it is expanded due to the decline of the water in the lake. Since 1987, the bottom of the lake around this island exposed on the north, west and south sides and connected with the land and then the top of the island is nearly 7.6 meters above the lake.

In March and April every year, a large number of migratory birds from south China and Southeast Asia, such as gooses, wild ducks and cranes fly to the Egg Island successively and built their home in this special island. In May and June every year, the bird eggs on the island nearly cover the whole island and the swarms of young bird are very boisterous and noisy. In July and August, with nice weather in autumn, a large number of birds fly in the blue sky and play in the beautiful lake, which looks very spectacular and magnificent. At the end of September, the birds start to migrate to the south of China. The government has built conduits, bunker, observatory and other facilities for tourists to watch the birds in Egg Island. It is very convenient and safe to visit in this island. 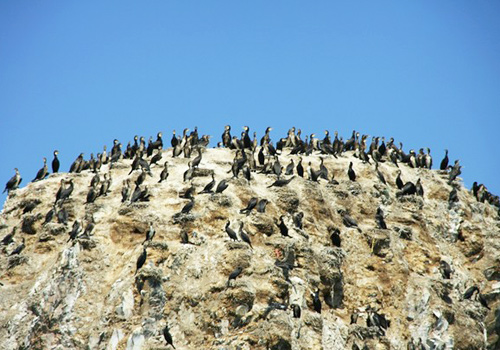 One kilometer from HaiXiShan Island is the HaiXiPi Island; cormorant is the main type of birds on the island so it is called "Cormorant Island". Cormorant Island is 4 times larger than that of Egg Island and it covers an area of 4.6 square kilometers. There is a 15-meter-long trestle road in this island, illustrating the natural resources and ecological environment of Qinghai Lake, so it also known as the natural ecological science corridor in Qinghai Lake. In the east of Cormorant Island, there is steep cliff and before the cliff is a huge stone erecting in the lake, which also is the ideal nesting place for the cormorants. It is said that the nest of cormorant on the stone is one by one. Therefore, the stone before the Cormorant Island looks just like a castle of birds.