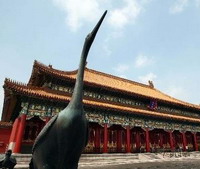 Transfer via: by air- arranged by us
Program:  Arrive in Beijing from Shanghai by yourselves, you will be met and transferred to hotel, short visit to see the Beijing Hutong.

Program:  Full day visit to see the Forbidden City, the Tian'anmen Square and the Summer Palace

Transfer via: by overnight train-soft sleeper (arranged by us)
Program:  In the morning visit the Badaling Great Wall, The Ding Tomb, The Sacred Road, exterior visit to see Beijing National Stadium (Bird's Nest), National Swimming Center (The Water Cube), feel free to take pictures there. In the evening, you will be transferred to the train station for overnight train to Xi'an

-Badaling Great Wall: One of the eight wonders in the world and the symbol of China.
-The Ding Tomb: The only underground tomb of the thirteen tombs of the emperors in the Ming Dynasty.
-The Sacred Road: The way guarded on both sides with stone statues by which the ancient emperors went to hold a memorial ceremony for the ancestors.
-Beijing National Stadium (Bird's Nest): The Beijing National Stadium, also known as the bird's nest was the main track and field stadium for the 2008 Summer Olympics and host to the Opening and Closing ceremonies.
-National Swimming Center (The Water Cube): The National Swimming Center, known as 'The Water Cube', was one of the most dramatic and exciting venues to feature sporting events for the Beijing Olympics in 2008.

Transfer via: by air- arranged by us
Program: In the morning, train arrives in Xi'an, have your own arrange breakfast to save time then, visit the Terra-cotta Warriors and Horses, Bell Tower and the Ancient City Wall and riding bicycle on the wall to enjoy the happiness with your boys and girls. Then you will be transferred to airport for flight back

-The Terra-cotta Warriors and Horses: The greatest archaeological findings of the century: the army of terra-cotta warriors and the bronze chariots entombed in vast underground vaults at emperor Qin's tomb.
-The Ancient City Wall: It is the largest and best preserved present city wall in ancient China and is probably the best military battlement in the world.
-The Bell Tower: The wooden tower, which is the largest and best-preserved of its kind in China, is 36 meters (118 feet) high.