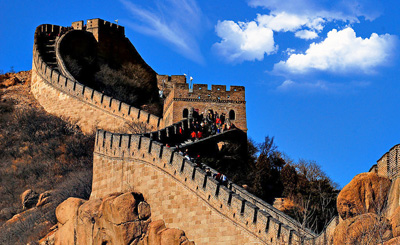 Transfer via: by air-own arrangement Program: Arrive in Beijing, be met and transferred to hotel, free at the rest of the day

-The Tian'anmen Square: The largest city square in the world. -The Forbidden City: The largest imperial palace in China during the Ming and Qing dynasties with a history of around 600 years. -Hutongs: The old narrow paths where common people lived. All the Hutongs crisscross with each other, dotted with the Kindergarten, the Bell Tower, the Drum Tower, the Tea House, and the lake, House of Gong Infante and local people's houses among them. -Lhama Monastery: the largest 260-year-old monastery in Beijing of the Yellow sect of Lamaism.

-Mutianyu Great Wall: This less-crowded section of the Great Wall is a pleasant drive 90km NE of Beijing. A cable car takes you to a good section (avoiding a very steep climb), where you can walk along the wall, through the watch towers and enjoy superb views as it snakes across the hills and mountains. -The Temple of Heaven: The place where the ancient emperors used to pray for the God's bless of the whole nation.

Transfer via: by air (arranged by us) Program: Visit the Summer Palace, on the way to the airport, you will take an exterior visit for both of the Beijing National Stadium (Bird's Nest), National Swimming Center (The Water Cube), be transferred to airport (Beijing), Arrive in Xian, be met and transferred to hotel, free at the rest of the day

-The Summer Palace: The largest and best-preserved royal garden in China with a history of over 800 years. -Beijing National Stadium (Bird's Nest): The Beijing National Stadium, also known as the bird's nest was the main track and field stadium for the 2008 Summer Olympics and host to the Opening and Closing ceremonies. -National Swimming Center (The Water Cube): The National Swimming Center, known as 'The Water Cube', was one of the most dramatic and exciting venues to feature sporting events for the Beijing Olympics in 2008.

Transfer via: by air (arranged by us) Program: Visit the Ancient City Wall with bicycle, be transferred to airport (Xi'an), Arrive in Hangzhou, be met and transferred to hotel, then visit West Lake, Three Pools Mirroring the Moon

-The Ancient City Wall: It is the largest and best preserved present city wall in ancient China and is probably the best military battlement in the world. -West Lake: Lying on the west edge of Hangzhou city, West Lake is the symbol of Hangzhou as well as one of the most beautiful sights in China.

Transfer via: by Express bus (arranged by us) Program: Visit Lingyin Temple, Six Harmonies Pagoda, Depart Hangzhou by express bus, Arrive in Huangshan, be met and transferred to hotel, free at the rest of the day

-Lingyin Temple: Lingyin Temple is one of the ten most famous ancient Buddhist temples in China. It also houses various Buddhist literature and treasures. -Six Harmonies Pagoda: It is a perfect symbol of brick-and-wood structure built in the ancient China. It was first built in 970 AD in the Northern Song Dynasty (960-1127). The name "six harmonies" comes from the six Buddhist ordinances, meaning "harmonies of the heaven, earth, east, west, south and north".

-Mt. Huangshan: known as "the loveliest mountain in China", famous for its magnificent scenery made up of many granite peaks and rocks emerging out of clouds. "

Transfer via: by air (arranged by us) Program: Cable car down, then visit Xidi Village, Hongcun Village, airport transfer (Huangshan), Arrive in Shanghai, be met and transferred to hotel, free at the rest of the day

-Xidi Village: First built 900 years ago in Song Dynasty, its traditional architecture is well preserved. The buildings and the street patterns, reflect the socio-economic structure of a long-lived settled period of Chinese history. -Hongcun Village: An ancient town over 800 years old leaning against Mt. Huangshan, it is folded in the fog of the Mt. which makes it look like a river and mountain picture; It enjoys the reputation of "The Chinese town in the pictures". Especially, the whole town distributes like a "cow", which made it one of the wonders in the world culture heritage. The famous film "Crouching Tiger" was made here.

-Yu Garden: It's reputed to be the most beautiful garden south of the Yangtze River. Built beside the Temple of the City God and covering only fives acres, it follows the Suzhou garden design of a world in microcosm. -Jade Buddha Temple: The Jade Buddha Temple is one of the few temples in downtown Shanghai. If you're lucky, you can watch the monks serving a ceremony in a side room. -The Bund (Waitan): It is one of the most recognizable architectural symbols of Shanghai. It is here where the first British company opened an office in 1846. -Shanghai World Financial Center: The Shanghai World Financial Center is a superhigh skyscraper in Shanghai, China. It is a mixed use skyscraper which consists of offices, hotels, conference rooms, observation decks, and shopping malls on the ground floors. -Nanjing Road: It is one of the most important commercial and tourist streets in Shanghai, which stretches from Waitan to Yanan Xilu.