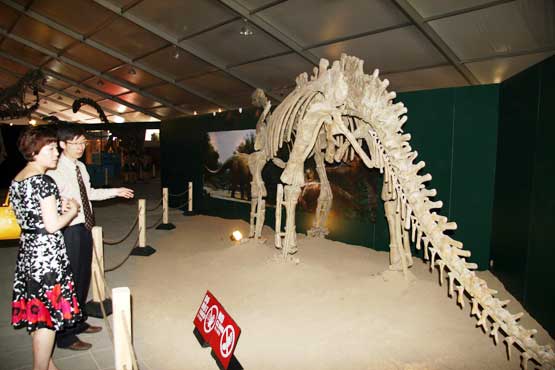 "Dino Dino Dream Park", China's largest dinosaur amusement park, opened in Beijing on Thursday. The park, some 300 meters north of the Bird Nest, covers an area of 25000 square meters and houses many of the nation's rare dinosaur fossils.

Among the displays, the fossil of "Epidexipteryx Hui", with a history of 176 million years, were transported to the park from Paleozoological Museum of China (PMC) especially for Thursday's opening.

The amusement park has three main exhibition halls namely the "Return to Jurassic", the "Ice Age Site", and an "Exploration into the Scientific World of Dinosaurs".

In the dinosaur inhabited artificial forest of the "Return to Jurassic", visitors are guaranteed to experience a real time journey back to the Jurassic age with hi-tech sound and visual effects.

While in the "Ice Age Site", giant models of extinct animals like smilodon and mammoth still roam about the exhibition hall to remind people of the prehistorical age.

During the "Exploration into the Scientific World of Dinosaurs", a treasured collection of dinosaur fossils are on exhibit. They are said to be selected from up to 220 thousand fossils possessed by the Chinese Academy of Sciences. Some of the colossal ones weigh about 1.5 tons.

According to the curator of PMC, this is the first time the invaluable fossils are exhibited outside the museum. In addition, the park will set up a special section for the live show of how to repair the dinosaur fossils. Professionals from the museum will explain to visitors the process of repairing fossils.

The park is also equipped with a 3D cinema in which two dinosaur-featured movies imported from the United States will be on show.