Your Position: HomeChina NewsA trip of history and culture

A trip of history and culture 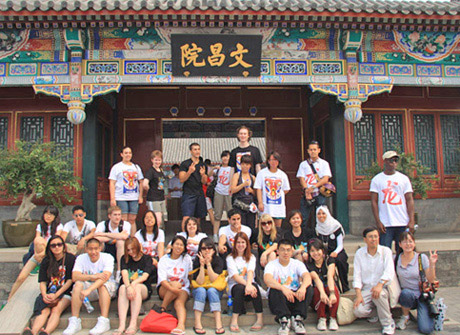 Last Saturday, a trip to famous resorts in Beijing was a feast for 40 international students studying Chinese history and culture.

Most of the foreign students were majoring in Chinese at Capital Normal University and Beijing Language and Culture University. The trip organized by the Haidian Tourist Bureau included visits to three places -- the Wenchang Gallery at the Summer Palace, Peking University and Yuanmingyuan Park.

Starting at the Wenchang Gallery at the Summer Palace, the students had a close look at fabulous ancient artwork. The Treasure Collection Hall displayed some classical porcelain vases and plates. The Chinese character for longevity (寿) written by Empress Dowager Cixi and her portrait amazed many of the students, and some of them took photos of the old dowager.

As they walked among the various rooms, the students from different countries and universities discussed the artwork. Their communication was not only an exchange of individual opinions, but also an exchange among different cultural backgrounds.

From this angle, the "History and Culture" trip was not just about Chinese history and culture, but also about gaining insight into other cultures.

The students entered one gallery that displayed some of the greatest artworks. A tour guide told them about every item on display, so that they learned about the legendary country and its profound culture.

"Did you see the jar with the red character?" said Forrest Fabian Jesse, a Ph.D. student at Beijing Jiaotong University. "It is simply fantastic. I'm totally impressed by that piece. I should feel lucky because it was not destroyed in 1860." 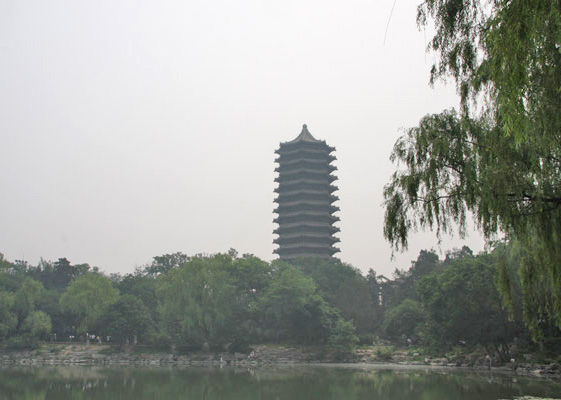 After a short drive, the students arrived at Peking University. They were impressed by the Boya Tower and Weiming Lake. Listening to the tour guide's introduction, they learned about the spirit of China's oldest university.

Walking along the path through the campus, the students arrived at the university's Arthur M. Sackler Museum of Art and Archaeology, although they showed little interest in it. A few went inside, but most decided to take a break and remain outside.

Peking University, colloquially known in Chinese as Bei Da, is a major research university in the capital city. The first formally established modern national university in China, it was founded as Imperial Capital University in 1898 to replace the ancient Guozijian (国子监). By 1920 it had become a center for progressive thought. Today, most national and international rankings frequently place Peking University as one of the best universities in China. In addition to its academics, Peking University is especially renowned for the beautiful traditional Chinese architecture on its campus grounds.

Throughout its history, the university has distinguished itself from its peers in terms of intellectual freedom and has produced many of modern China's prominent thinkers, including Lu Xun, Mao Zedong, Gu Hongming, Hu Shih, Li Dazhao, and Chen Duxiu. Peking University was influential in the birth of China's New Culture Movement, May Fourth Movement, and many other significant events. 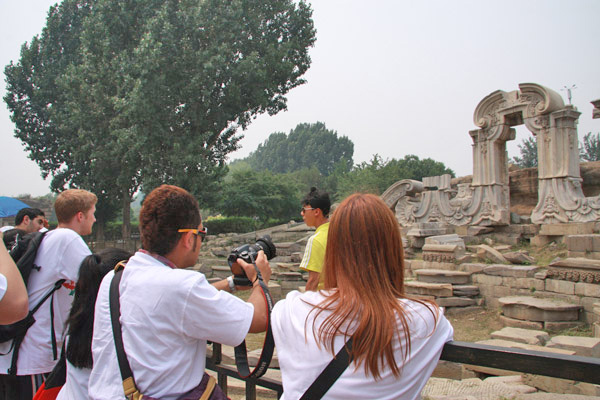 In the afternoon, the students went to Yuanmingyuan Park. Here they saw the remnants of the beautiful palace and gardens. At the site of the Dashuifa, a tour guide explained what it and other palaces such as the European Palace looked like before they were destroyed in 1860. From the description, the students could imagine how magnificent the palace use to be.

The students then entered the garden maze called Wanhuazhen (万花阵) and attempted to reach the center where a pavilion stands. Some students found the right way almost immediately, but others took quite a long time. Some eventually gave up and climbed over the walls to get to the center.

Afterwards, the students took a short break and returned to their schools.

"This is a great experience today," said, a Japanese student at Capital Normal University, who wish to be identified as Kyoko, "These historical sites will tell generation after generation that we need to respect history. On the path to civilization, we still have a lot of lessons to learn."

Yuanmingyuan Palace, known in China as the Gardens of Perfect Brightness, and originally called the Imperial Gardens, was a complex of palaces and gardens in Beijing. It is located eight kilometers northwest of the walls of the imperial city built in the 18th and early 19th centuries, where the emperors of the Qing Dynasty resided and handled government affairs. (The Forbidden City was used for formal ceremonies.)

Known for its extensive collection of gardens, architecture and other works of art (a popular name in China was the "Garden of Gardens"), the Imperial Gardens were destroyed by British and French troops during the Second Opium War in 1860. Today, the ruins of the Gardens of Perfect Brightness are still regarded as a symbol of foreign aggression and humiliation in China.

The student tour was based on four themes. The other three were "Dynamic Science Education Trip," "Study and Motivation Trip" and "Earth and Creature Trip." The entire tour will last until August 28.