Your Position: HomeChina NewsMin cuisine takes pride in its variety of yummy soups

Min cuisine takes pride in its variety of yummy soups 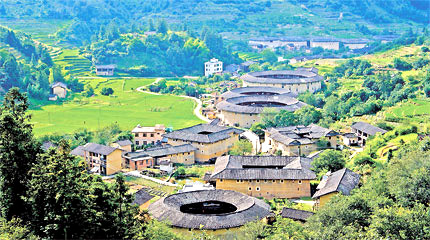 The photo shows some Tu Lou (houses made of earth in Fujian Province), which are famous around the country.

The cuisine originated from Minhou County and evolved into three schools, including Fuzhou, Minnan (south of Fujian) and Minxi (west of Fujian).

The Fuzhou school mainly refers to Quanzhou and Xiamen styles, which feature fresh tastes with sweet and sour flavors.

The Minnan school developed in Zhangzhou and is famous for its various sauces and seasonings, featuring sour and slightly spicy flavors.

The Minxi school evolved in Changting. It is generally more salty and spicy and uses delicacies from mountainous areas as its major ingredients.

Red vinasse with red rice wine and the liberal use of sugar and vinegar are two favored methods of Min cooking.

As early as the Tang Dynasty (AD 618-907), red vinasse was introduced to Fujian by merchants from central China. Since then red has been the main color of Min cuisine. Red fish, red pork and red chicken are commonly seen on dining tables across Fujian.

The province is also known for its "drunken" (wine marinated) dishes and is famous for quality soup stocks and bases used for flavoring.

As the province is blessed with abundant natural resources -- a long coastline to the east and vast mountainous regions in the north -- Min cuisine features a lot of mushrooms, bamboo shoots, sugar cane, lotus seeds, river eel, soft-shelled turtle and clams.

Min cuisine boasts a slicing technique dubbed as "thin as a piece of paper and as light as a strand of hair."

According to Min chefs, the natural taste of food can be brought out by fine, proper knife skills and they are strongly opposed to over-fancy and showy cutting techniques. Min cuisine chefs have to follow a set of strict slicing regulations.

Another saying about the region's cuisine goes: "It is unacceptable to have a meal without soup."

As such, Fujian chefs are soup experts. They are very good at using various sauces and seasonings to create all kinds of soups.

Fujian people love soup because they believe it is the most nutritious way to eat and that it brings out the true taste of the ingredients. For Min people, a bowl of soup with every meal is indispensable.

For example, the famed quick-boiled clams with sanrong soup made from ham, beef and chicken after being simmered for hours. It is known for its tender fresh clams that leave a long aftertaste.