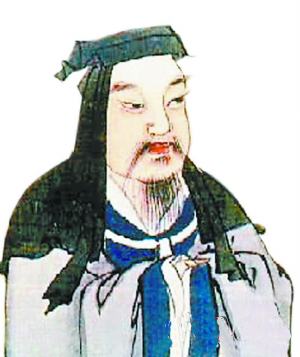 On Saturday (June 12), some mysteries were revealed in a live television broadcast of the excavation of a famous ancient general Cao Cao's tomb and they did puzzle Chinese archaeologists.

The three-hour live broadcast by the China Central Television (CCTV) began at 9 a.m. with experts invited to respond to doubts on the controversial claim that the site was the Mausoleum of General Cao Cao, a legendary warlord of the Three Kingdoms period (208-280 A.D.).

The archaeological society and amateurs had cast doubt on the claim before the State Administration of Cultural Heritage late Friday declared the find was one of the 10 top archaeological findings in China in 2009.

"The announcement indicates that the Chinese academic world has generally endorsed the authenticity of the tomb of Cao Cao in Anyang, although there are still many myths behind the legendary figure," said Sun Yingmin, deputy director of the Henan provincial bureau of cultural heritage.

The tomb is located near the Yellow River and in Xigaoxue Village,Anyang, where Cao Cao ruled the Kingdom of Wei from 208 to 220, when he died at the age of 65.

The Henan Provincial Cultural Heritage Bureau announced the discovery of the tomb in December 2009, triggering nationwide interest in the ancient statesman, whose exploits were immortalized in the 14th Century historical novel "Romance of the Three Kingdoms", regarded as one of China's greatest literary works.

Cao Cao had been portrayed as intellectual, but scheming arch-careerist in Chinese art works. 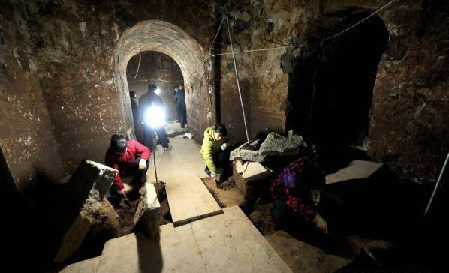 The excavation undertaken by the Chinese Academy of Cultural Heritage has uncovered the layout of the mausoleum.

The square-shaped mausoleum comprises two pits covering 8,934 square meters. The No.2 pit has been identified as the coffin chamber of the tomb master, where a male skull, two female skulls and more than 250 relics have been unearthed.

The male skull suggested the man was aged over 60, and the females were aged about 20 and 50, but archaeologists have not reached conclusions on their identities.

Liu Shuguang, rector of the academy, said authorities were planning to build the mausoleum into a national archaeological relic park.

Although the excavation of the mausoleum is almost complete, archaeologists are still puzzled by the purpose of the No.1 pit, which was found to contain only an iron sword.

"The tomb was built at the same period as the main tomb, and the two are only 30 meters apart. The No. 1 pit is smaller and less decorated, which suggests it is a satellite tomb," said Pan Weibin, a chief researcher with the provincial bureau.

He said the tomb had been severely damaged with seven holes opened by tomb robbers.

There are many assumptions about the tomb. Some said it had been occupied by Cao Ang, eldest son of Cao Cao, who died before his father.

Popular speculation has it the tomb might have stored Cao's weapons, or jewelry, or books.

Liu Qingzhu, member of the Chinese Academy of Social Sciences (CASS), said the function of the satellite tomb was still a mystery, but it must have reflected Cao Cao's thoughts.

He said experts have generally ruled out theories that the tomb had been occupied by Cao Cao's wife or one of his favorite concubines, as the tomb's standard suggested it was of a lower class. 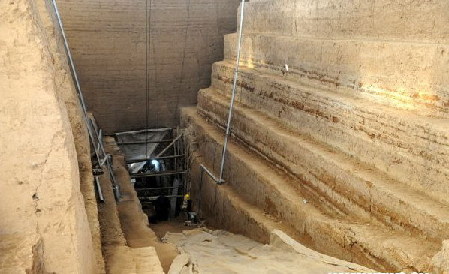 During CCTV's live broadcast to mark the fifth Chinese Cultural Heritage Day Saturday, a ninth stone stele engraved with characters showing the name of a weapon used by the general from the No. 2 tomb was unearthed.

However, the stele's upper part was missing."The missing fragment should carry the engraved characters of Weiwuwang or the King of Wei like the eight other steles. However, all of the steles and stone carvings with the king's name have suffered human damage," said Liu, of the CASS.

He said the severity of destruction surprised archaeologists. Besides the damage to items with the king's name, the male skull discovered in the front of the main chamber indicated that the body had been dragged out the coffin and the face smashed.

Experts assumed that Cao Cao's rivals caused some of the destruction as well as tomb robbers.

Archaeologists are also studying the 6-meter high main chamber's ogive, or pointed arched, roof, similar to that of a church spire, which is rare for tombs of that period.

Many stone and pottery miniatures of living necessities were unearthed from the tomb, such as a hogpen with the function of a toilet, a stone well, ancient musical instruments and writing desks.

Liu said many items suggested the tomb master, though a warlord, was immersed in the arts. This complies with historical records showing Cao Cao was a military strategist, veteran politician and man of letters.