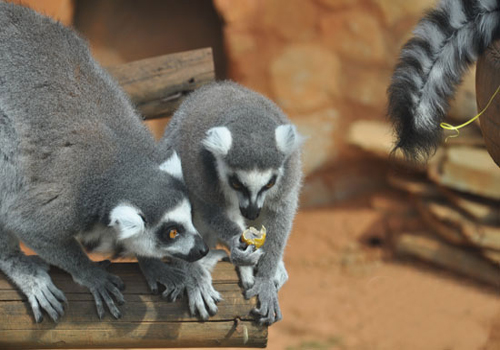 The Yunnan Wild Animal Park in the provincial capital of Kunming is currently offering night tours to visitors, the first time any wildlife reservation in China has offered such an experience.

On Aug 9, the park introduced the night ride, which took visitors in a car through a large forest in the northeastern area of the reservation that is inhabited by at least 40 kinds of animals, including peacocks, gibbons, baboons and zebras.

Park officials said it's a unique chance to see how animals behave at night. It charges 100 yuan per person and suggests visitors book their tickets a day ahead by telephone or internet. The tour, which can accommodate 100 visitors each night, begins at 7 pm and lasts until midnight.

On one particular ride recently, most of the animals were resting as night fell. A guide was explaining where the animals could be found.

Not far from the entrance to the forest were some gibbons. Most had a penchant for robbing their night guests of food. Lele was the most aggressive of them and headed straight for any tempting food.

The gibbon, whose forehead wrinkles made many people laugh, was a very entertaining ape, at one point showing his bottom and shaking his body at a visitor who teased him with bananas.

As the road led into the forest, a few zebras were on a slow but elegant walk. The park allows visitors to feed the zebras, but on this night, the male zebras were in a fight for mating rights as several females watched nearby. One of the male zebras hit the neck of its opponent and bit it while kicking it with a front hoof. The tour car passed by before a victor was determined.

As the car drove on, a group of ostriches were scared off and ran into the adjacent meadows. Very often, visitors might encounter ostriches that are camouflaged in the brush where they sleep.

Flashlights are the best tool to find the hidden animals, but camera flashes are not allowed during the tour for fear the flashes might hurt the animals' eyesight. Surprisingly, some animals were extremely calm when they saw the flashlights.

One part of the tour's routine is to ask a random visitor to hold up a banana and to keep it up as long as possible. Within seconds, the tree branches were swinging as if a strong wind blew through. Soon some pygmy slow lorises, the smallest slow lorises in Yunnan that are also nocturnal, were going after their favorite fruit.

The guide reminded visitors to immediately let go of their bananas if they come into contact with a slow loris or they could have their fingers scratched in the encounter.

The peacocks, on the other hand, were inactive, sleeping in the tree branches as they did during the day. Driving under one of the peacocks only aroused it enough to open its eyes for a few seconds before falling back asleep. During the night, each of the peacocks sleeps on its own branch and never invades the space of others.

Liu Li, a 33-year-old mother who takes her son to the park every weekend, was extremely excited to go on the tour. She ordered five tickets for her family for the coming weekend.

"The night tour will show another part of the animals' life and my son will absolutely love it," she said.