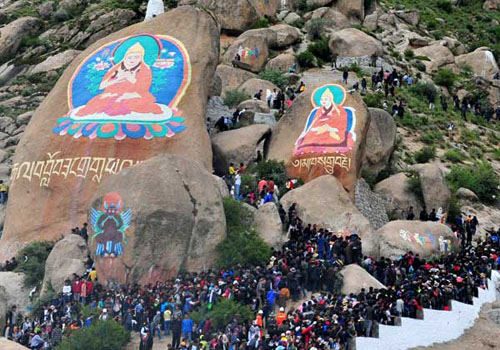 Giant thangka, religious silk embroideries and paintings, on the mountains behind

Drepung Monastery in Lhasa, capital of the Tibet autonomous region, attract thousands of

people on Tuesday to mark the traditional Shoton Festival.[Photo by Li Zhou / For China Daily]

Thousands of people celebrated the unrolling of the thangka--a giant religious silk embroidery--to kick off the start of the Lhasa Yogurt Festival on Tuesday.

Accompanied by the sound of horns reverberating through the valley, monks slowly unrolled the thangka on the mountainside behind the Drepung Monastary in the capital of the Tibet autonomous region at about 8 am.

"I have seen thangka in Qinghai before. But I was still totally shocked when I saw such a giant thangka today," said Cui Lingrui, a student from Nanjing University.

Both tourists and locals woke early, and some even stayed up through the night to visit or worship here, said a monk who declined to give his name.

Restaurant owner Nyima Butri closed her business on Tuesday to take part in the festivities.

"I got up at 4 am this morning and I arrived here around 6 am by walking," she said. "In order to have good luck, we all wear new clothes on this hopeful day."

One of the most popular in Tibet, the seven-day festival, also called the Shoton Festival, is celebrated annually in August, or the sixth or seventh month of the Tibetan calendar.

The festival dates back to the 17th century as a religious occasion in which residents offered yogurt to monks who had finished their meditation retreats, said Tashi Palden, the deputy editor-in-chief of Tibet Daily.

With the theme of "Happy Lhasa, Beautiful Home", this year's festival will include events such as Tibetan opera, Buddha photo and Tibetan mask exhibitions, and long-distance hikes, according to the city government.

"Traditional Tibetan culture is magnificent in my eyes," said Wang Tianlu, a Hindi translator from China International Television. "I adore such traditional culture from the bottom of my heart."