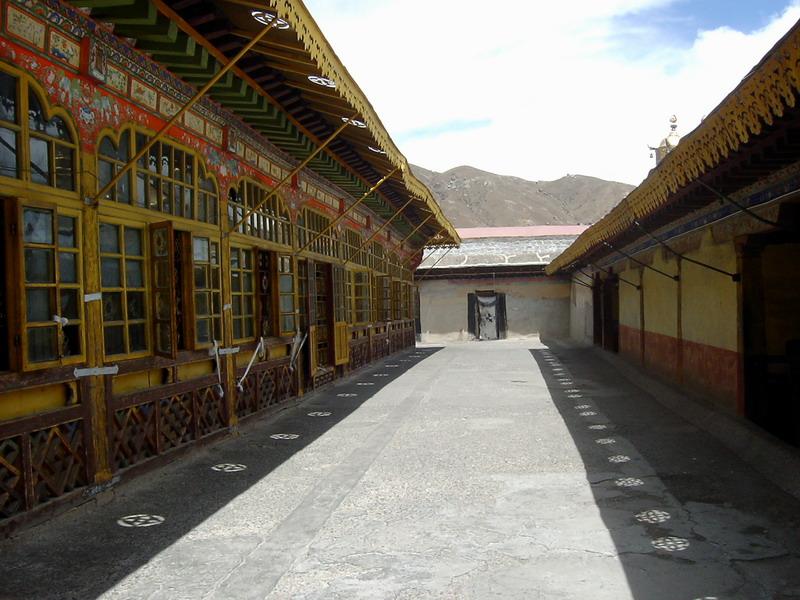 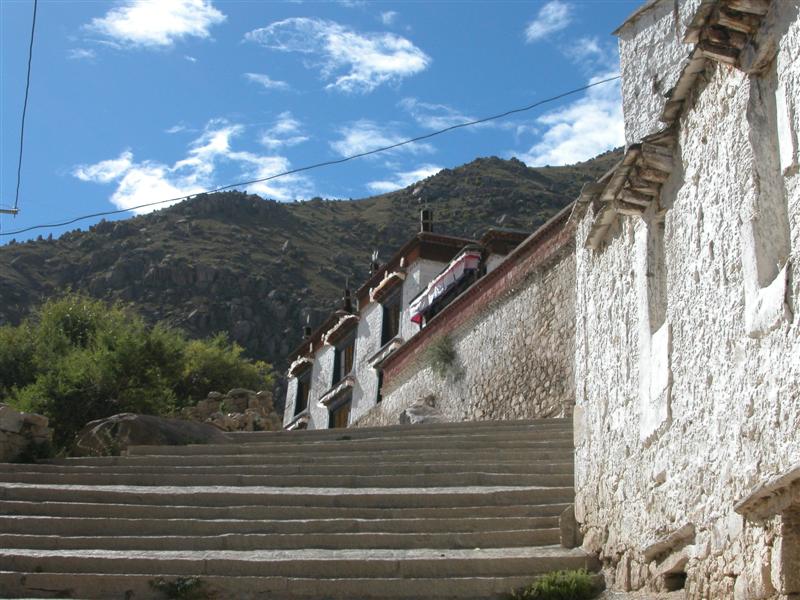 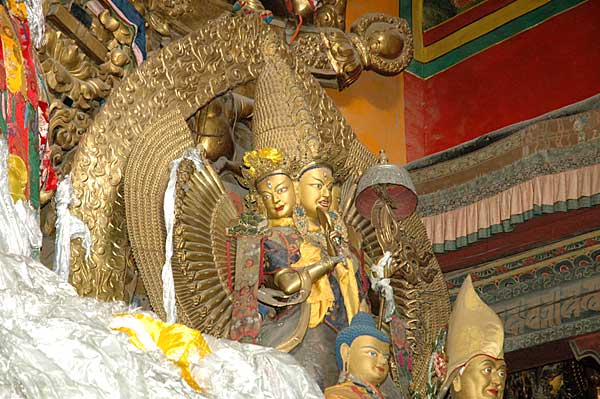 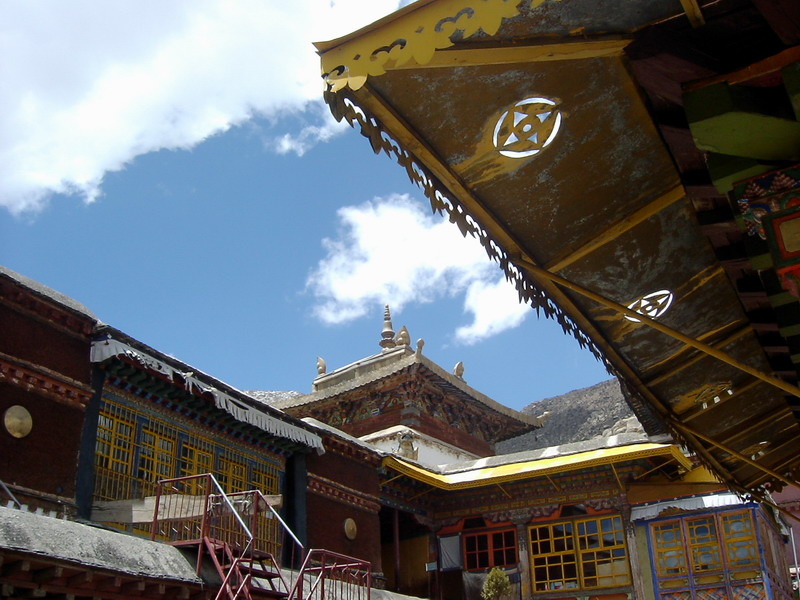 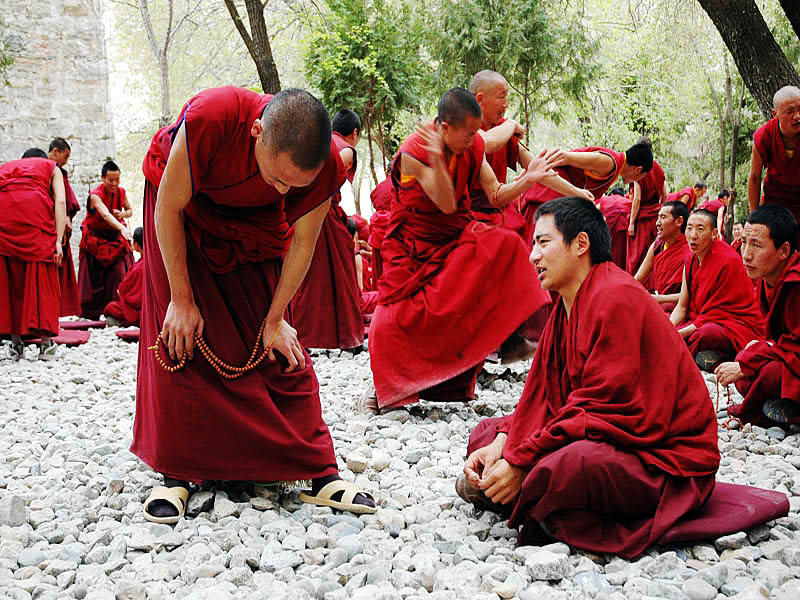 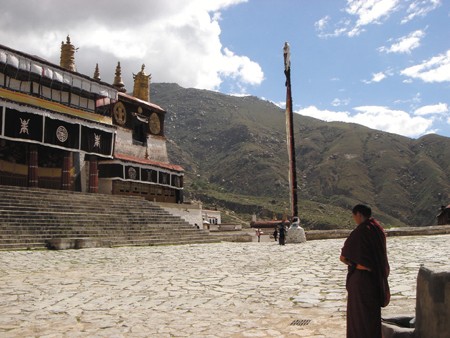 Chinese name: 哲蚌寺 (Zhebang Si)
Location: on Gambo Utse Mountain, 10 km west of Lhasa City, Tibet Autonomous Region.
Entrance fee: 55 Yuan
Opening time: 09:00-17:00
How to get there: The way for foreign travelers to enter Tibet is booking a Tibet tour or a China tour containing Tibet with a Chinese travel agent in advance.

Founded in 1416 by Jamyang Choge Tashi Palden, one of main disciples of Tsongkhapa (founder of Gelugpa), the Drepung Monastery in Lhasa is the most superordinate among the six Tibetan gelug monasteries as well as the residence that the Dalai Lamas come.

"Drepung", meaning "rice gather" in Tibetan, comes from the monastery's white architectural complex carpeting on Mount Gambo Utse, which look like a heap of rice in a distance. 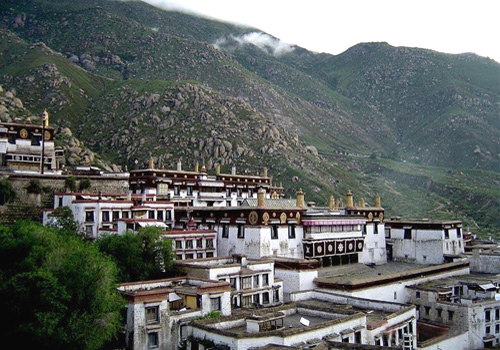 The monastery was a small temple occupying less than 20 square meters with only seven monks at the very beginning. It did not be enlarged to be seven dratsangs (Tibetan Buddhist schools) by the fifth Dalai Lama until the first half of 17th century. With over 500 years' development, the monastery once rose up to be the largest Tibetan Buddhist monastery with more than 10,000 monks, 3305 subsidiary branches, 141 manors and over 540 pastures before 1950s. In 1959, a democratic reform abolished the serfdom in Tibet and the feudal privilege of monasteries, which made Drepung Monastery one of the public religionary sites for the common to undertake religionary activities.

Centered on its first building, nowadays Drepung Monastery has expanded to be a large-size architectural complex covering 250,000 square meters, with the Tsokchen Hall, four dratsangs and the former residence of Dalai Lama being the major buildings, under national protection. 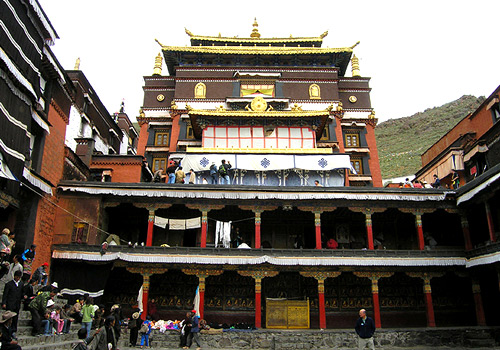 The Tsokchen Hall sits in the center of Drepung Monastery with an area of 4500 square meters. In front of the hall there is a square, which leads to a corridor by a 17 stone steps. As the main hall, Tsokchen Hall is undoubtedly grander and better adorned than parts of the monastery. What draw visitors' attention are the exquisite Buddha Manjushri and the emblem of Buddhism – the swastika symbol (which is a cross with the arms bent at right angles in a clockwise direction and was used by the Nazi during World War II). The sign is said to be disinhumed from the earth by Tsongkhapa and gifted to his favorite disciple Tashi Palden and then enshrined in Drepung Monastery. Also, the stupas of the second, third and fourth Dalai Lamas are reserved in the hall.

On the third floor of the hall there is a huge copper sculpture of the 8-year-old Byams-pa (Maitreya), which was sanctified by Tsongkhapa in person. To this day this statue is still seen as the most omnipotent Buddha in Tibet as well as a great treasure of art. Above the Buddha there is a plaque written in Chinese dedicate by Qi Shan when his term as an imperial official in Tibet ended in 1846. The fourth floor is the Sakya Hall where 13 silver pagodas are placed. 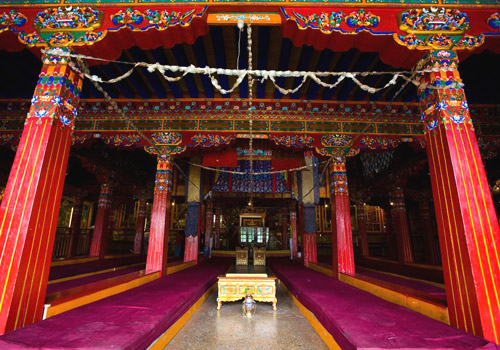 Seven dratsangs were set up and managed by seven disciples of Jamyang Choge Tashi Palden when the Drepung Monastery was newly founded, while today the seven have been merged to be four according to disciples' Buddhist courses and place of birth.

Luosailin Dratsang (罗赛林扎仓) is biggest with most students among the four Tibetan Buddhist schools in Drepung monastery. The well-decorated Sutra Hall, one of the school's main structures, is supported by 102 pillars and walled with lines of sutra-shelves. Behind the Sutra Hall is the other main part of the school, a Buddha hall where all kinds of Buddha statues are enshrined. Guomang Dratsang (郭芒扎仓) is just second to Luosailin Dratsang with similar main layout and Deyang Dratsang (德阳扎仓) is the smallest one. Aba Dratsang, the Esoteric Buddhism school of Drepung Monastery, is at the right side behind the Tsokchen Hall; its forepart is a closed courtyard with lamas' rooms set around, and the rear is sutra room painted with Esoteric Buddhism themed murals. 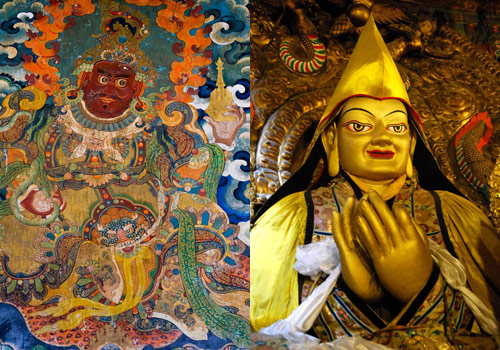 Gandain Phodrang, or Extreme Bliss Palace in English, was constructed in 1530 under the charge of the second Ladai Lama when he held the post of the tenth abbot of Drepung Monastery. The third, four and fifth Dalai Lamas had once lived and supervised the monastery here and a powerful local authority was built during the term of office of the fifth Dalai Lama, as a result the building used to be seen as the pronoun of the local power of Tibet. Its function as a political power center ended after the fifth chose to deal with the daily affairs at the Potala Palace. 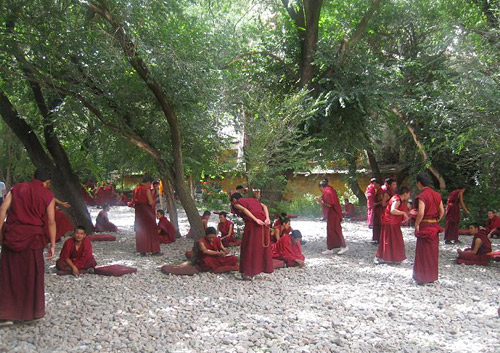 Just as other Tibetan Buddhist monasteries, sutra debate holds an important part in a lama's study. The sutra debate sites of Drepung Monastery are several courtyards sheltered by trees near lamas' rooms. All the lamas are allowed to participate in the debate in principle, however, in fact only few knowledgeable ones are capable of being finalists and win the degree of "Geshe" at the end.

Unlike regular sutra debate at Sera Monastery on Wednesday, that at Drepung Monastery is unscheduled. Therefore, travelers may need some luck to meet a debate at Drepung. 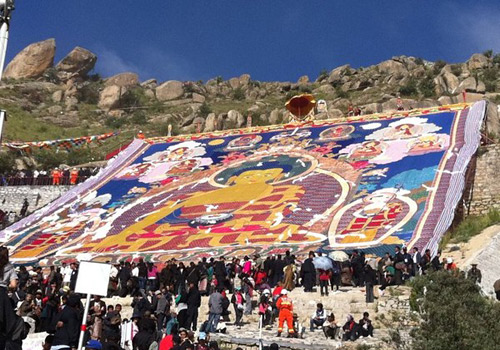 It is said that Shoton Festival (雪顿节), one of the most important festivals in Tibet, originated at Drepung Monastery. The festival was first celebrated as a pure religionary activity at the middle of the 11th century and afterward was enriched with Tibetan opera added between the 17th and 18th century.

It happens from the end of the sixth month to the beginning of the seventh month in Tibetan Calendar, during which all lamas of Drepung should stay at the monastery to avoid killing new-born animals and pilgrims came to the monastery to show their respect and blessing by offering yoghourt, hence the name ("Sho" – yoghourt, "ton" – feast, in Tibetan).

On early dawn of the thirtieth day of the sixth Tibetan month, a 30-meter-long and 20-meter-wide satin with portrait of Sakyamuni is spread on Mt. Gambo Utse, called "basking Buddha" literally. Therefore, Shoton Festival is also Basking Buddha Festival and every year of the time the mountain is activated by a dense sea of people.