Your Position: HomeChina NewsCollapsed bridge in Tibet to be open in Sept

Collapsed bridge in Tibet to be open in Sept 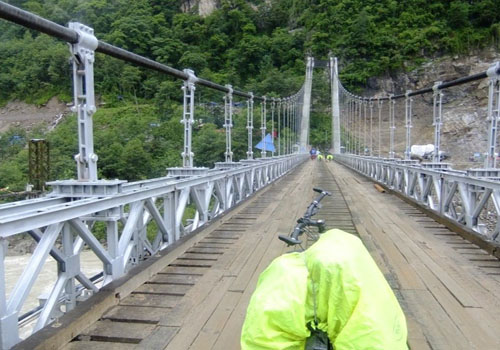 The reconstruction of a bridge that collapsed in the Tibet autonomous region on last Friday is underway, and the bridge will likely reopen in September.

Located on the Sichuan-Tibet highway, which connects Chengdu, capital city of Sichuan province, and Lhasa, capital city of Tibet, the Tongmai suspension bridge in Bomi county collapsed at about 11:30 pm.

"Workers and soldiers are rebuilding the collapsed bridge, which is expected to reopen in one month. Experts from the county road transport bureau are assessing whether a small bridge near it is safe for people crossing on foot." she said.

The Tongmai suspension bridge is 258 meters long and 31.5 meters high.

"Without the bridge, drivers have to travel two more days with an additional 700 kilometers," said Xiao Defeng, a driver in Chengdu who often takes tourists to Lhasa.

Xiao was driving several tourists to Lhasa when the bridge collapsed. "They gave up their plan to Lhasa and asked me to take them to Shangri-la in Yunnan province from Mangkang," he said.

While the accident has affected drivers and tourists, it has also disrupted life in Changdu, a prefecture in Tibet.

"The prefecture with 11 counties has only around 1,000 beds in its hotels. As it is not a popular tourist destination, the prefecture normally has only several hundred visitors a day. After the bridge collapsed, many tourists are stranded in the prefecture, where there are an average of more than 10,000 tourists a day," said Qu Zhen, an official from the prefecture's tourism bureau.

"Since there are no hotel rooms available, many tourists have to stay at bath centers. As private hotel owners have raised their room rates, the prefecture tourism bureau has announced its hotlines for tourists to report wrongdoings." she said.

An investigation into the cause of the bridge accident is underway, according to Hung Bingyong, a police officer in Bomi.

"A truck with two villagers carrying a load of 18.9 tons passed the bridge when it collapsed. The bridge could endure 20 tons." he said.