An exhibition in Beijing, combining paintings with historical items about Huns and the Central Plains, offers viewers an in-depth observation into the two civilizations.

The innovative concept came about when Xu Rui and her colleagues from Henan Museum first saw a group of large oil paintings about Huns in 2011. 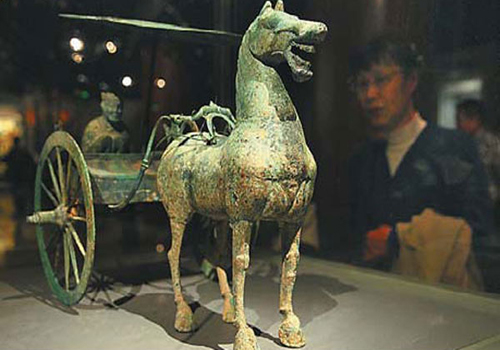 (Exhibited relics and artworks reveal a vivid picture of the cultural merging of Huns and Han people. [Photo by Jiang Dong / China Daily])

Huns were nomadic people who first appeared in Europe before the first century and according to some reports, they are related to the Xiongnu people who migrated out of the Mongolia region.

"We were overwhelmed by the vivid description of history," Xu says. "Our museum has been exploring new exhibition forms," he says.

They were inspired to plan an exhibition that combines the paintings with historical items related to Huns.

When they presented the idea to Shanggu Arts, the owner company of the art pieces, the two parties immediately reached an agreement.

They bounced their exhibition concept off curators and experts from museums of the Inner Mongolia and Ningxia Hui autonomous regions and Gansu province, and were met with support. Each museum contributed its reserved relic pieces.

The result of their hard work is the exhibition, Huns and the Central Plains: Collision and Mergence of the Two Civilizations, now housed at the Beijing World Art Museum of the China Millennium Monument. The show displays 115 pieces and sets of artifacts and 28 large oil paintings on related historical subjects.

The exhibition received overwhelming response when it was held in Henan province and Inner Mongolia last year.

"When I saw the exhibition in Zhengzhou (Henan's provincial capital), I became deeply interested in its subject and theme. After a year of concerted efforts, it is now presented here," says Wang Limei, curator of the Beijing World Art Museum.

The exhibition received more than 2,700 visitors during the first two days, according to the museum's executive curator Zhou Wei.

"It is our first attempt at combining artifacts with art. The oil paintings give a vivid interpretation of the meanings of the artifacts, while the artifacts attest to the historical facts represented by the paintings," Wang says.

The exhibition is divided into three parts, namely the different customs, collision and mergence of the two civilizations in history.

The Huns belonged to a nomadic civilization while the Central Plains people were farmers and formed the cradle of Chinese civilization. Their collision started in the third century BC and continued for centuries.

In the first part of the exhibition, visitors learn about the Hun customs, such as animal worship, and there is comparison with those of the Central Plains.

Many of the exhibited head-shaped ornaments were excavated from the Hun tombs or sacrificial sites. For instance, a bronze argali head-shaped ornament, dating back to the Warring States Period (475-221 BC), was unearthed at Yulongtai in Ordos of Inner Mongolia.

Meanwhile, fine decoration pieces excavated from the tombs at Aluchaideng in Inner Mongolia in 1972 are evidence of the Huns' love for gold and their high-quality craftsmanship.

Among them, an extremely rare eagle-topped gold crown is the only complete Hun crown so far, according to Tala, curator of Inner Mongolia Museum.

"Some of the artifacts present distinctive features of the culture they belonged to, such as the Huns' bronze weapon pieces and bronze pieces decorated with animal patterns.

"But relic pieces from one civilization are often found carrying features of the other, such as some excavated funerary objects," Xu introduces.

Gold and silver processing techniques were highly developed with distinctive styles among the ethnic groups in the north, which had a profound impact on the Central Plains.

In the 1980s, archaeologists excavated two cemeteries at Daoduizi and Lijiataozi in Tongxin county. The tombs are believed to belong to Hun immigrants living in the five border counties of the Western Han Dynasty (206 BC-AD 24) and their descendents.

Experts found that their funeral customs, such as the tomb structures, were influenced by the Han culture.