Your Position: Home VOC's Travel BLOGChina travel GuideXing An of Guilin: A trip back in time

Xing An of Guilin: A trip back in time

With three days holiday I needed something do, so harnessing my adventurous spirit I decided to visit one of the twelve counties that surround Guilin. Guilin is such a perfect base for extended travel purely due to the fact that there are so many amazing locations to visit within relatively close proximity, all of which have amazing scenery and unique characteristics, it offers visitors to Guilin to experience a new town every day. Upon arriving at the bus-station it was clear that a combination of heavy rain and bus departure times that the most convenient destination would be the Northern county of Xing An. 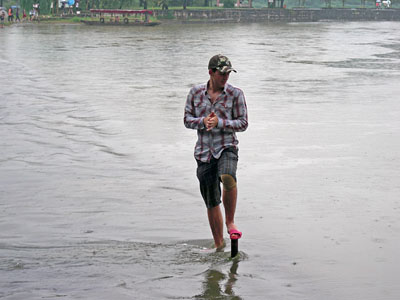 As with many trips throughout China the journey is often as enjoyable as the destination itself. The trip to Xing An included a winding trip through rugged mountain terrain and rice terraces overflowing with heavy June rain. It's always great to drive through the country-side and see farmers driving bullocks through freshly tilled soil, and ancient-looking woman perched on the side of the road selling an assortment of fruits. From Guilin it takes around two-hours to get to Xing An which in English translates as Peace and Happiness. A small township sitting in the northern part of Guangxi Zhuang Autonomous Region  Xing An has a vibrant albeit small community of less than one-hundred thousand people. But what is there to do in Xing An? Surprisingly quite a lot!

There are three main tourist destinations in Xing An: Mao Er Shan (Cat Mountain), Chao Ran Pai (a renown nature retreat) and Ling Qu or Ling Canal (an ancient Imperial Dyke) all of which are beautiful and historic because of flooding throughout Guangxi which would make heading into the mountains slightly perilous I decided to head to Ling Qu which is only five minutes out of town. Entry costs is the somewhat inflated price of Y50 (US$9) but with a flash of my student card I was in for half price. I wasn't sure what to expect from Ling Qu but to be truthful what I discovered failed to excite me in the way I had hoped, true there is an amazing two-pronged river that runs through park an seeing it full or deep drown water flowing furiously was a site to behold, but that aside the tourist park is in disrepair which much of it literally crumbling upon itself, a boat ride across the river provided a brief highlight in an otherwise ho-hum experience. It was not until I emerged from the park and into the township itself did I witness something worth writing home about. 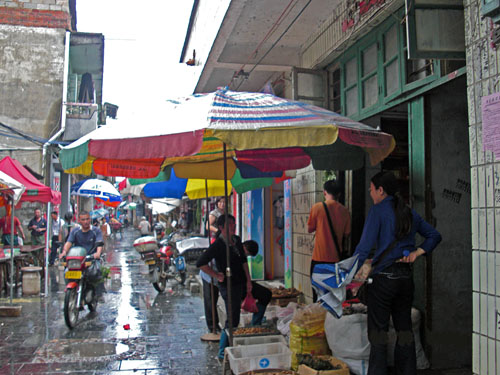 The amazing thing about the township of Xing An is how it is seemingly to unaffected to the machinations of the world around it, it is a town with a style and feel all of its own, especially on the day of the festival there was a tangible fervor which was both thrilling and exhausting at the same time, as I wandered the streets I found a small and dank Rice Noodle store in which I enjoyed an enormous bowl of rice noodles, I imagine this is what China must have been like thirty-years ago, after lunch a wander into a small alley called "water street", tables covered in hog organs, live crabs struggling to escape from their plastic prison, weathered old women spinning clothes from the shadows of their houses and a pervading smell of steaming bread accompanied by wafting streams of steam flowing from a bakery, this must be 'real China', indeed to debate the point is irrelevant, this is a China you will not see in Beijing or Shanghai or even in Guilin and for this reason Xing An is worth a visit.