A Trip to the Dong Village: Part Ⅰ

The winding mountain road seemed endless. Sometimes it's so narrow that it's just alright for one car to get through. I had to hunk a lot whenever arriving at a sharp bend, in fear that people driving from the other direction might not see us coming. I dared not to see the beautiful views out of the windows, such as tea plantations, rice terraces and villages, all so appealing. Grasping the steering-wheel so tightly, my hands were wet. Including Ms. Zhao, there were five of us in the jeep, who are all supporting "pillars" of families with old and young. Could I afford to be careless, even for just a second? 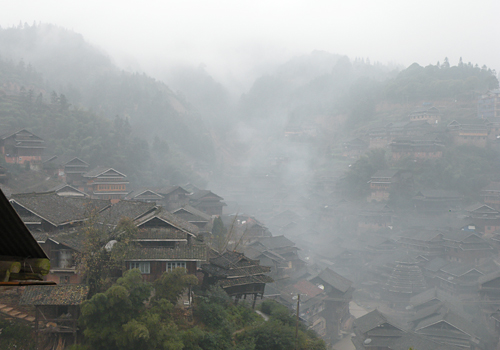 Finally Ms. Zhao pointed ahead and said, "Here we are. The house in front of us is the working spot of our museum." I felt so relieved, but it soon got dark after I parked. Hearing the noise of the jeep, people inside the house ran out to welcome us, as people living in the mountains never lack hospitality. There were five of them too, Mr. Wu, head of the village, his wife and child, and two university students, Zhong and Lin, who had come to work as interns for quite some time already. Seeing the big party of us coming, also with food which might be a good change for their appetite, they were all very happy and greeted us warmheartedly. Dinner was ready shortly, for Ms. Zhao had arranged that through phone calls. A meal on the mountains like this would be simple but rather delicious, so we had free ranged chicken with soup. A big iron wok was sitting on the flaming charcoal, and the air was filled with beautiful smell of the boiling chicken soup. The soup looked rather clear, with a bit yellow oil on the surface. What a nice and authentic local chicken! Having been driving on the bumping road for a whole day, everybody was hungry, so we were all charging into the food with chopsticks like a shower of arrows. After a while, there was only some soup left in the wok. Then the next dish we had was vegetables boiled in the chicken soup. The vegetables were sweet and tender because they were picked fresh from their own garden. We thought of drinking until we got some food into our stomachs. We had the local wine made from sticky rice, which was not so strong, about 15-20% alcohol. Its flavor was mild and smooth, though with a bit smoky taste, since they burned firewood instead of coal while making the wine. The local wine also tasted plain, without the pompous fragrance of those famous brands on city banquet tables, simply like the Dong people of the mountains. I only realized it's pretty strong after finishing one bowl of it. I became warm and feeling spontaneously like treading on the air. Looking at the fire of burning charcoal before us, we were just so happy. 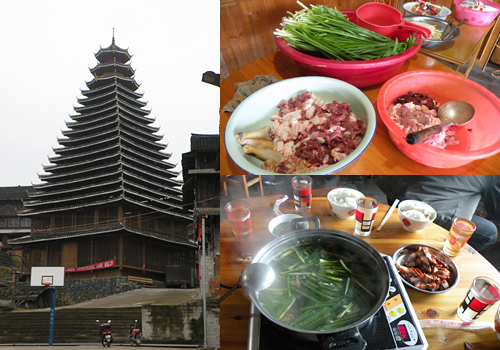 After enough wine and food, Mr. Wu offered each of us a cigarette, which is the Dong families' custom of respecting their guests. I remember looking at those old men chatting inside the drum towers, with every one holding a bamboo tobacco pipe, long and short, each bringing their best leaves to share. So don't say anything disappointing like 'Smoking is harmful for your health' on this occasion. It's all right if you don't smoke, just have the cigarette lit up.

Everybody was speaking actively and enjoying the conversation. But all became quiet when Mr. Wu changed the topic to the religious beliefs of the Dong people and the mysterious stories of what had happened around the area. The characters in the stories all had real names, which increased the degree of truth. It's spattering with light rain outside of the house, and so dark that one could not see his own palm.

Mr. Wu said that when he was in primary school, he got an intimate classmate in the class who was from his village. Everyday they would walk to and from school together. The Dong village was even more isolated in the mountains in those days. Many of the people had never been to the county town in their whole life since they didn't have much contact with the outside world. One day a couple came to his class to look for this classmate. The three of them were talking, then all sobbing together. Mr. Wu noticed surprisingly that they were talking in a language which he could not understand at all. He got to know that it's the Miao dialect. It turned out that the couple was from a Miao village in Hunan beyond Gaoding village. But Wu and his classmate grew up in the same Dong village and could only speak the Dong dialect. Furthermore, the Dong people hadn't had much contact with the Miao in the history, as there hadn't been any intermarriage. The story behind had been like this: Wu's classmate had been the reincarnation of that couple's dead son. Although he remembered his last life very well, he had not dared to mention it in the fear of causing a misunderstanding. Until he became 11 or 12 years old, he could not bear it, and then wrote a letter to his former parents, for he missed them so much. This was what happened next. As for the details of the reincarnation, he remembered that he just followed a carpenter all the way to the Dong village, without awareness of having been dead already. He was about 10 years old by then. In order to prove what he said, people had to take him back to the Miao village. Upon arrival, he walked straight away to the old house where he had lived. Then he climbed up a beam and took a shuttlecock from above. Later on the two families built up a relationship as relatives. Wu said he had seen people of that family from the Miao village taking two bulls to his classmate for presents.