Another story of reincarnation happened to a carpenter in Wu's village. One day, his 12-year old son talked to him abruptly and pointed out a few mistakes in his drawing. Thinking it merely as a child's joking, the veteran carpenter certainly could not believe his ears. His son was proved to be correct afterwards. His son had been the reincarnation of an old carpenter of the same village who had passed away over 10 years ago. Besides of that, he had been an apprentice for that carpenter, but now he became his son. His son could remember everything of his last life, including his craftsmanship as a carpenter. After that, he allowed his 12-year old son to manage a lot of his work. But his son never called him father, maybe because he felt too embarrassed. According to Wu, reincarnated people who could remember their past life lived not only in his village, but also in other Dong villages. Probably this kind of mysterious event takes place in the Dong villages, where conditions would be right for things of this type to happen. But Wu said that reincarnated people normally had not lived long and had died young. Maybe they wanted to change their circumstances again and again.

We were also told that there had been a medium who could conduct people in the worlds of both Yin and Yang. That is, he could take you, your soul into another world to see your dead relatives. Wu said that he had once accompanied his friend to the medium, through whom his friend had asked to see his dead relatives. So he had seen the whole process as follows: The medium held a simple ceremony, burning some incense and joss paper, as well as singing the Dong folk songs with a weird tone. His friend followed the singing spontaneously, though before that he had not been able to sing at all. While singing along with the Dong music, he found himself coming to a place of hustle and bustle, which looked nothing different from this world. There were pavilions, terraces and towers, as well as people singing to the Dong music of Lusheng. So, there he met his relatives who had already passed away, feeling no sadness at all. Just after talking a while with them, somebody released a dog to bite him. Being so scared, he started to run, only tumbled and then woke up. Others who had experienced that also described it in a similar way. There had been always a fierce dog or frightening animals chasing them, trying to bite them on their way back, otherwise, they would not have returned to consciousness. This was the power of the medium. Or else, it would be a big trouble. The medium had to search for him if he could not get back to this world. Mr. Wu dared not to try it, in case that he might not come back, as saying that his wife is still young and child little. He explained to us too why his friend tried it. Because his father died so suddenly and he didn't get to know where he put his money, as the country people were not used to putting their money into the banks. Now he wanted to see his dead father and ask him where he had put the money. Well, I forgot to ask Wu if his friend had found the money or not. Wu said that not everybody could try to see their dead relatives, for the medium had requirements of doing it. For instance, people with single eyelids are not allowed. I've made an appointment with Wu that I would like to try it next time. Why not this time? Because I have single eyelids, and would come again after I go back to get my double eyelids done. Moreover, I also have a special request, i.e. I'm willing to pay a double price if I can take my camera with me. 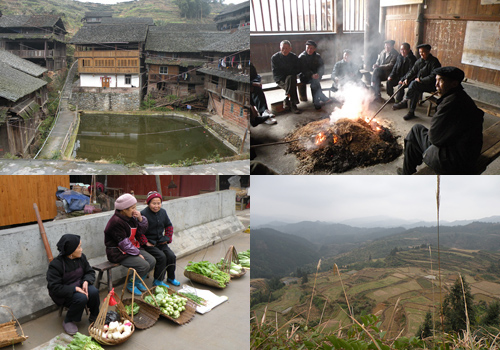 Mr. Wu said that one can believe these stories or not, for they sound seemingly so ridiculous. I would rather believe them; at least, I wish they had been all true. How great it would be? Reincarnation would be no more a privilege for the living Buddha, normal people rather than reincarnated souls of Buddhists can also make it. But it's absolutely true that it's better for a person to have faith than nothing. That's why people in the villages of the mountains can live at ease, without any pressure like ours. Especially those old men chatting by the fireplace in the drum towers, holding bamboo tobacco pipes in their hands. They don't have to talk over their children's going abroad, or about how to achieve longevity either. They feel so certain when they go home and touch their coffins prepared long ago. Comparatively, the non-religious materialists have a too practical viewpoint on life and death. Namely, a person's life ends up like the extinguishing of a light, everything becomes meaningless after one dies. That’s why the most eminent of those materialists, like Pohl Pot, were so panicky about death on the deathbeds. Pohl Pot committed innumerous murders when he launched the campaign for red political power in Cambodia, while he himself finally died in a small hut, screaming like a bitch before he went to hell. 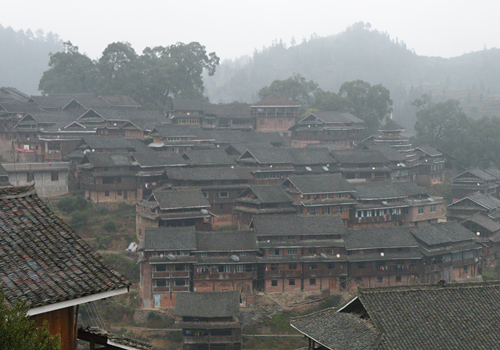 Our trip in the Dong minority area lasted only a few days and thus rushed to an end. What a beautiful area it is! So I did take many pictures of the everlasting wooden houses, the delicate wind-rain bridges and drum towers. Typically we have had good memory of the traditional and rather simple life of Dong families. I should definitely come back, and come often.