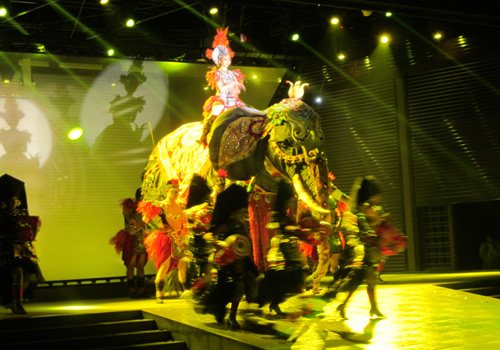 On arriving at the third gate of Elephant Trunk Hill Scenic Area along the Binjiang Avenue, which is also the entrance of this show, I found a swarm of people flowing in. Under the slaty sky, raindrops began to pitter-patter. The staff, at the entrance, kindly and smilingly handed plastic raincoats to each visitor.
When it was at 08:30 pm, the show commenced. Different from those in the theatre, it is shown in the open air and comprises four parts in different locations of the Elephant Trunk Hill Scenic Area; therefore, visitors have to walk so as to appreciate the shows. First of all, what hove into view was Lijiang River Gallery. A ten-plus-metre long screen all at once drew my attention, on which a story related to the elephant was recounted. Accompanied by the melodious music, the screen, by virtue of high tech, displayed the elephant helping the locals build houses in return for its lifesavers, depicted notable attractions in Guangxi, such as Chengyang Wind and Rain Bridge, Dragon's Backbone Rice Terraces, Xingping scenery and other marvelous fragments. Following the stream of people, we then move to the second part, called Mysterious Ancient Village. Several elephant-like works of art glittering among vivid bushes were towering to the sky to inspire people with hope. At sight of this, I was beyond myself and felt as if I were in a remote country and my heart were flying high up into the skies. 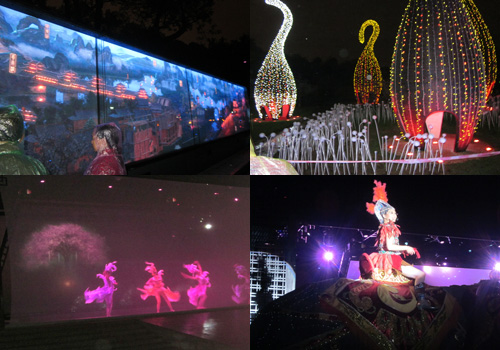 With the end of the second part, we walked to the Theatre of Auspicious Elephant under the guidance of the staff. Thanks to the perfect combination of high technology and accomplished dancers, I, standing in front of the theatre, watched the evolution of life on the earth. All of a sudden, an artificial giant elephant lumbered out of the stage with a delicate girl atop wearing the national dress. She sang, she waved, she threw embroidered balls. The splendor and magnificence of the scene was beyond all description. I, in spite of the chilly wind, felt overjoyed, almost to the point of waving my arms and stamping my feet. Particular mention should be made of the fourth part, where the show, via projection, totally set off by the elephant trunk hill, presented the formation of Guilin, the tokens of Guangxi Autonomous Region such as brocade, bronze drum, and the soul of this scenic area – the elephant. This giant animal sucked up water and sprouted it from his trunk; at last, a bubble floated skyward and just lightened the Puxian Pagoda on the hill…
This one-hour show of A Tale of the Elephant Trunk Hill was so exciting that I didn’t realize it had drawn to an end. Not only did it lead me to lingering flavor, but also provided me with a good opportunity to communicate with my expert colleagues.
---Gaea (VisitOurChina)
Tags: Elephant Trunk Hill Guilin show high tech