Your Position: Home VOC's Travel BLOGCulturesOne bygone of my ZhiQing life in the countryside- My room-mate in the People's Commune: Part I

I started my independent life just overnight, the year I was 16. Before that I had never left my parents for a remote place. The first night when I slept on bed in the village, my ear was still with the sound of drums. It was from the farewell ceremony of school. It was a long way from school to the commune by truck, and from the commune to the village on foot. But there was a further way in front of me. The more I thought: "is this the place will I stay for life time". I was awake almost for the whole night. 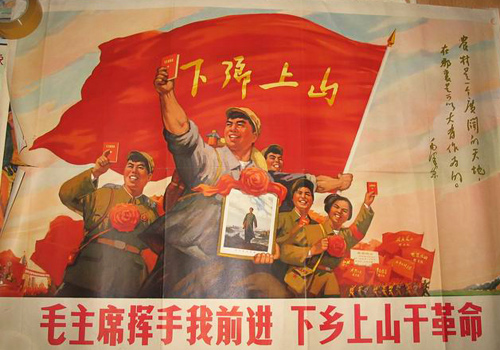 Our group of four was assigned to a big old house in the central of the village. Two boys and two girls. A big bamboo screen divided the house into two rooms. So I shared the room with Xiao Ma, we had been room-mates for three years.
Xiao Ma was one year older than me; he was from another school but the same city. We didn't know each other before. He was from the west gate of Guilin not far from my home. It was the Muslim community. Xiao Ma was smaller than me. The first impression made on me was serious; his eyebrow was heavy and too close to the eyes. It looked as if he always was encumbered with anxiety.
The more time we stayed together, I found that Xiao Ma was really a serious man. He was serious about the relation to others, serious to spend money. The reason that we could get along well for three years was I am not a serious man, so we could share our mutual benefits with each other.
Xiao Ma and I not only lived together, but ate together. Eating together could save money, save times and easier for rice cooking, otherwise burned rice would be more than half. We didn't care who cook more or less. It depended on who came home earlier from field. Firewood was no problem, you could get as much as you want, they were stalks of peanuts, soybeans and sesame.

Something happened to harm our relationship which I still feel guilty about. It aroused from some fish. The story was like this. One day when I was going to leave the village with another friend for home to visit my parents, I was called to get some fish which was distributed from my work team. In People's Commune all food was distributed like rice, sweet potato, cooking oil even vegetables. At that moment, my friend hurried me and said "take the fish home for your family". I didn't have time to think, so I brought it home. After several days I went back the village. That night Xiao Ma gave me a long, serious talk with tears about the fish which I had almost forgotten. I didn't realize it was so serious. I will regret until I die for those fish. Other things happened even worse which were also my fault. There were some ZhiQing spots for each village (Zhiqing were educated youth and practitioner of the campaign of up to the mountain & down to the countryside). We visited each other very often. A guy named Lao Gua was from another ZhiQing spot which was only 15 minutes walk to us. Gua was a sort of poisonous friend. The pity was that I was not mature enough to tell and treated him like a life time friend. Lao Gua came to our place to eat very often, and never had any thing in return. Xiao Ma complained about this. Yes I knew and understood it; it was unfair for Xiao Ma, because Gua was a close friend of mine, not him.
We finally separated to eat because one thing occurred. It was the spring of 1973. We went back to the village after a long New Year's holiday. When we opened the door of our old house, we were surprised, and didn't want to believe that our rice, the main food for the whole year was stolen. It was terrible, we reported to the police, then we worried about how we could survive for the rest time of the year. That evening was so dark, we ate nothing. Lao Gua came on time, for dinner. He didn't know what happened. When he heard our story, he left silently. Later other ZhiQing told us that somebody saw Gua selling his extra rice in the market.
- VisitOurChina
Tags: Zhiqing People's Commune life in countryside