Your Position: Home VOC's Travel BLOGCulturesOne bygone of my ZhiQing life in the countryside- My room-mate in the People’s Commune: Part II

Normally we could enjoy a little bit of leisure after harvesting of the second crop of rice. But the winter of 1973 was busy, especially in our ZhiQing spot. Because a big group of high school graduates were sent to our commune. That day, we were happy to welcome ten more new ZhiQing to our spot. Yes life was boring here. We always hoped something new would happen to us. The old house seemed too small for us. So the Commune decided to build another one- a new ZhiQing spot to us. Of course, the commune had no money for that, everything was paid by the central government. For this campaign was considered as a very important part of the Culture Revolution, a strategy of anti-capitalism.
The ten new comers like us came a few years ago, half boys, half girls. Xiao Jiang was one of five girls; she was the sort of attractive to boys. She was small with a cute, baby like face. She knew it was to her advantage, so she also talked in that way. Boys were excited to stay with her. So we were always tried to find some excuses to be close to her. We liked to help her to chop firewood, to carry water from the well, to borrow a spoon of salt from her or a bowl of oil. Anyway, it gave a fresh flavour to our life.

1974 was the lucky year for Xiao Ma. He got something good, one after another. First he changed his job to a teacher in the commune school. It was not a permanent job, but at least he didn't have to work in the field, and could get a salary. Actually this chance came to me first. The commune secretary talked to me about this. I hesitated to answer because I was afraid to lose a future opportunity of back in the city, if I took this job.
Xiao Ma still lived in our ZhiQing spot; the commune school didn't offer a dormitory for teachers. Xiao Ma preferred to live here. One reason was that he could see Xiao Jiang every day. But what Xiao Ma wanted to do was different from us. He wanted to get Xiao Jiang for himself since his condition was better than the others.
The situation was changed so suddenly because of flooding. The rainy season came a little bit earlier in 1974. Two days of nonstop big rain made the Li River and even the reservoirs full. For a short time, those rice paddies around our spot were all flooded. Fortunately our new ZhiQing spot was built on a little hill close to the village; but the road was covered and separated us from the village, it became an isolated island. We didn't have time to withdraw to the other place. It was amazing to see so many little animals were concentrated in a small place. Our spot also became a shelter for them. About ten snakes, big and small twined around a tree behind of our house, rats, toads and centipedes moved along the foot of the wall. They all looked poorly, without any threat to each other. Two nights were very long for all of us in the spot, except Xiao Ma; he occupied Xiao Jiang at night when she needed someone to depend on. The third day morning, when we awoke, we found the flood was ebbed away, all those animals had gone. It seemed nothing happened. We gathered and chatted in front of the house. Xiao Ma came to us and was proud to announce that Xiao Jiang belonged to him already. All of us, boys heard this news in silence. 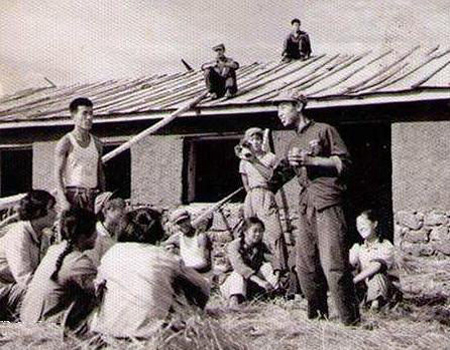 The following year, Xiao Ma enjoys his best time of life, until the time of 1975. When industry of China returned to normal, more labours were need in the factories.
Some of ZhiQing would be transferred back to cities, but not all of them. The competition was unfair and cruel. For the transfer, some procedures were included, like physical test, and political exam, of course something more under table. But what was the political exam, for these kids? Just to investigate the history of their parents, then their grand-parents. It was the theory of Chairman Mao's "class struggle". I could do anything, but change my father's history, for he was a successful capitalist before 1949. So the transfer for me changed from a dream to a night-mare afterward.
Xiao Ma was lucky to pass, not only him, but Xiao Jiang, even to a same factory. Xiao Ma did a lot of works under the table. It seemed two worlds for us. For the people like Xiao Ma, Xiao Jiang were happy to pack their luggages, and were going home. But for those losers like me, what we wanted to do, just to find a place to hide. Not long after that, I met Xiao ma in the street, he asked me something about transfer, actually he knew everything. When he heard my sad news, I found that his face, his smile was so happy that he could not hold. His smile hurted me.
Time was flying, no matter good or bad. Many years later, I heard something about Xiao Ma from another former ZhiQing. Xiao Jiang parted from Xiao Ma not long after they went back to the city, Guilin. Because the factory was a different society from the commune, they faced many choices. Xiao Ma was a loser. He had been depressed for a long time. He was introduced by his parents to a divorced woman whom he married when he was close to 30 years old.
--- VisitOurChina
Tags: Zhiqing Guilin People's Commune Li River