China boasts vast territory with various geographic environments that are instrumental in forming and preserving sorts of species. No countries other than China possess such abundant raw materials of foods. And its people are collecting, digging, picking and catching these gifts of Mother Nature throughout the year. China is also a populous country with distinct tastes, but inviting Chinese foods never fail to appeal to people. Lotus roots are one of the gifts from part of nature - lakes, and delicate dishes made of them are always mouthwatering.
Lotus roots, rhizomes of nelumbo nucifera, are one of high-yield vegetables growing in the mud under the lake. And Hubei province of China abounds with this delicacy from nature, especially Jiayu County which falls within the subtropical monsoon climate with temperate weather, abundant rainfall, sufficient sunlight and high humidity. The average annual precipitation there is about 1370mm and the average annual temperature is 17.0℃. All this conforms to the growth conditions of lotus roots.

When it comes to October, Jianghan Plain of Hubei province and Dongting Lake Plain of Hunan province witness autumn’s arrival. During this season, it is common to find the water level going down, which enables Chinese people to get access to the bottom of the lake. Each year, many a lotus roots-digger begins their arduous work in September. It is a new challenge and opportunity for them in that what they are going to undertake is to dig out lotus roots.
As these vegetables grow in the glade, digging out them is by no means an easy task. It needs both patient and skills; otherwise, you can hardly have a clear idea of growth tendency and the length of lotus roots before removing the mud on them. In addition, lotus roots look less fancy if they are broken instead of being intact and worse still, they cannot sell at a good price unless they are not filled with ooze. Therefore, every lotus roots-digger must be meticulous whenever they are working.
Onerous the work is, professional diggers are willing to undertake it because of high payment. Every year, they have to leave for in the places teeming with lotus roots for consecutive several months. They understand that the harsher the working environment is, the greater the dividends are paid. 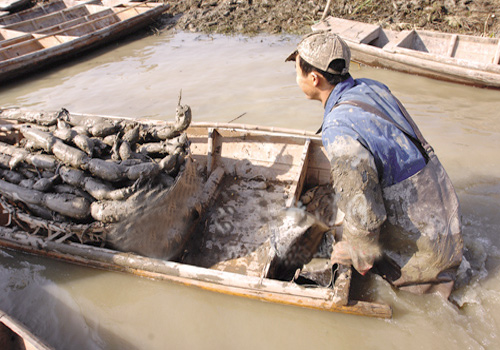 Of four seasons, diggers are fond of winter most. It is not because winter suits working but that more people would buy lotus roots than any other time. Accordingly, prices will shoot up.
As mentioned above, Hubei province is home to lotus roots and its residents know better different ways of eating this vegetable which is rich in starch, dietary fiber and vitamin C.
One of the most popular dishes in Wuhan, capital of Hubei province is Stewed Lotus Roots Soup with Pork Ribs. If you are visiting Hubei, you will always find this dish served in almost every household once or twice a month. But do you know how to make it? First, cut pork sternums into thick slices and simmer them in the marmite for an hour. Next, peel and wash lotus roots before cutting them into slices. Then when you put them into the soup, you should turn up the fire to the point of boiling. Half an hour later, this tasty dish can be enjoyed! 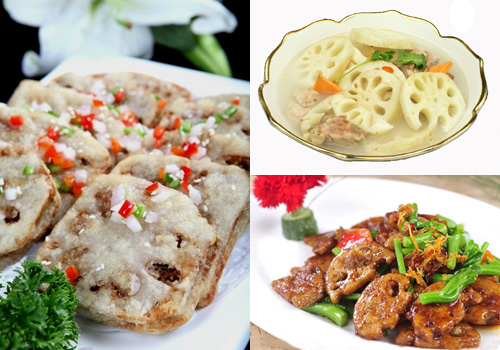 Another classic dish is Coupling Clamp. It is easy to make. First, chop pork and mix it with eggs and chopped green onions. Then, peel and cut the lotus roots into two linked slices. After that, you can fill the lotus roots with chopsticks and make sure the fillings are evenly spaced. Next, cover them with flour paste and fry them until they turn golden.
Generally speaking, not only are lotus roots one of the raw materials of foods bestowed by Mother Nature, but also vegetables obtained via manual labour. The only way to get them is by man rather than by machine. From this perspective, lotus roots are more valuable than any other vegetables. So whenever we enjoy the lotus roots, we should never forget those loveable and respectable people who make dainty meals available to us.
---By Gaea (VisitOurChina)
Tags: A bite of China China food Hubei lotus roots