As before, the worship is held on the same date (falling on March 27-29 in Gregorian calendar this year) on Ganzhuang Mountain, Baiyu Town, Tianyang County, Baise City, Guangxi Zhuang Autonomous Region, with an official name – Buluotuo Cultural Tourism Festival. At the festival there are not only domestic visitors from Guangxi, Guangdong, Yunnan, Guizhou but also foreign visitors from Southeast Asian countries such Thailand, who commonly share the Tai-Kadai languages. And as before, once again I miss the chance to join my people  because I work in Guilin, 8-9 hours' drive from my hometown. Thanks to Internet, I can observe the festival from my computer.

Photo: The Opening Ceremony of Buluotuo Cultural Tourism Festival on Ganzhuang Mountain on March 28, 2012. According to official calculation, there are would be about 300,000 people visiting the mountain during the festival. 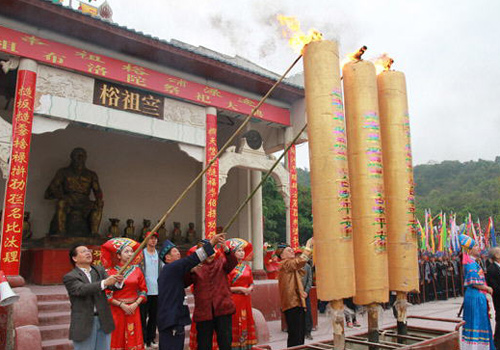 Photo: Three tremendous incenses are lit in front of a temple on Ganzhuang Mountain. 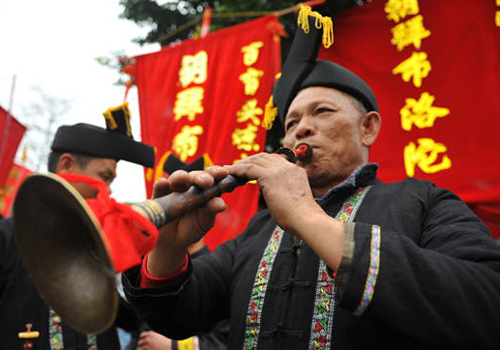 Photo: An elder Zhuang male is blowing suona, which is a common musical folk instrument in Tianyang. I guess all suona players have a good vital capacity, because each piece music usually lasts for 5-10 minutes and they need to blow it uninterruptedly when playing. 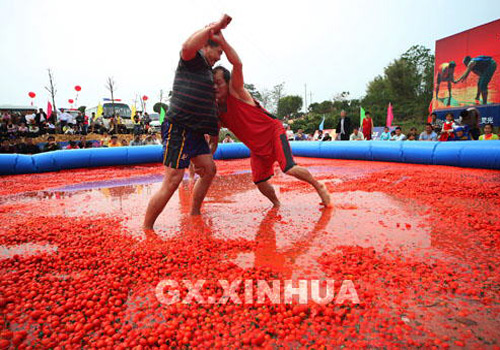 Photo: Two men are wrestling in a shallow pool full of cherry tomatoes, which is one of the local agricultural products of Tianyang as well as one of the favourate fruits. 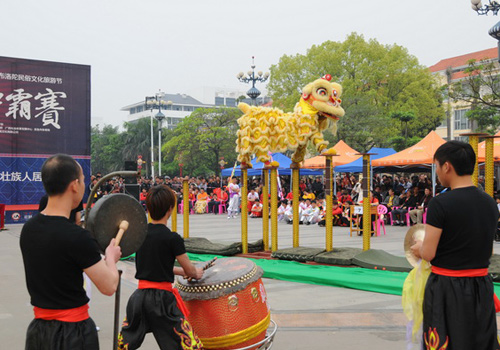 Photo: There are 15 lion dance teams from Guangxi, Guangdong, Hunan, Shanghai, Hong Kong, Macau, Thailand, Singapore and some other regions and countries taking part in the Lion Dance Athletics during the Buluotuo Cultural Tourism Festival this year. 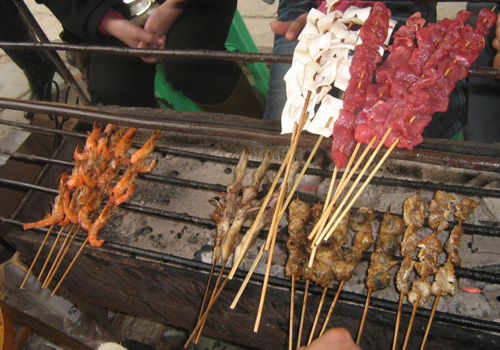 Photo: Tianyang barbecue is what many people look for most at the festival, I guess. There is a joke in mainland China that "Chinese eat everything running on land except cars and everything flying in the sky except planes". It is exaggerated, of course, but Chinese, especially people in Guangdong and Guangxi, do eat many things resisted by westerners. Take the barbecue in my hometown for example, people barbecue chicken/duck claws, duck intestine and tongue, snakes, and many else I can't tell in English. I know these sound crazy for westerners, but I think maybe you can have a taste of barbecued pork, beef, shrimps, chicken's wings, hot dogs, hams, Chinese chives and fried tofu if you pay a visit to my hometown some day, the barbecue really taste great.