As one of China's five ethnic autonomous regions (Guangxi, Tibet, Xinjiang, Inner Mongolia, Ningxia - equivalent to five provinces), Guangxi Zhuang Autonomous Region is in fact the habitation of many Chinese ethnic groups, including the Han and 11 indigenous ethnic minorities among which the Zhuang accounts for majority. Having been being influenced by the outside world, more than more youth generation of the minorities are accepting modern lifestyle and concepts, but some of their peculiar ethnic customs are still well passed on in some remote areas. In this post we would like to share some traditional wedding customs in Guangxi:

Arranged marriage by matchmakers and parents was once a tradition for Zhuang people and a couple might not have a chance to meet each other officially before they married.  After the founding of P.R.C, Zhuang people began to be free to go dating and choose their wives/husbands by some Zhuang ways. One of that is, girls and boys beat a wooden trough with sticks and sing folk songs antiphonally to show their love to their beloveds. Besides, folk song fair is also an important occasion for the Zhuang youth to make the acquaintance of each other and decide a date. Those good at singing usually draw more attention, but that is only the first step to a marriage. Only is a guy considered to be a reliable man by his girl after further contacts, he is successful totally in the relationship.

Traditionally, Yao people did not intermarry with other ethnic groups. The youth can find their love by singing at festivals and can date as they like, but they have to get approval from parents if they wanted to marry (on the premise of obeying laws, of course). It is common for Yao that a man lives with his wife's family after they get married. In many areas in China, men who get such marriage are usually despised by some prejudiced people, but that's an honor for Yao men and they will earn high respect in Yao society. On the other hand, it is daughters who enjoy the priority of inheritance, which is far away from the feudal concept of "women are inferior to men" in China. A Yao wedding ceremony is usually simple and unadorned: on foot or by riding a horse the bride goes to the groom's home, where she will be welcomed by all the villagers with songs. The second of the wedding days will be spent at the groom's home and from the next day on they will go back to the bride's and start working, symbolizing the beginning of their marriage. 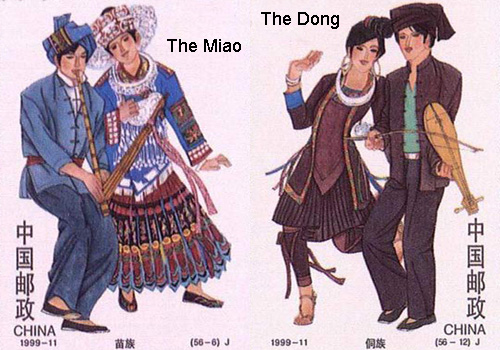 Free dating is allowed among Miao people as well. If a couple find each other congenial, they should ask their parents to choose an auspicious date to hold a formal wedding ceremony. One the marriage decided, the couple will not meet each other until the day before the big day when the man has to escort bridal accessories to the bride's home. One of the accessories is a round and thick cake made of glutinous rice powder (usually 12-15 kg), implying the marriage will be "团团圆圆 (united and harmonious)".

The old tradition of "grabbing" the bride was once popular at the junction of Hunan, Guangxi and Guizhou. The ways of "grabbing" were various with a commonness that both the bride and the groom were willing. On the night of the wedding day, the bride would hide herself with help of her bridesmaids and the groom and his groomsmen had to think of a way to find the bride, "grab" her into the bridal sedan and go back home accompanied by jubilant drum beatings and trumpet blowings. 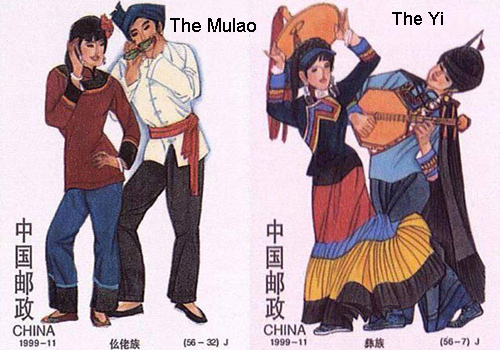 "Zoupo", literally "walking on the slope" in English, is a very popular means for the Mulao youth to choose their dates. This social activity usually happens in slack seasons of agriculture, the days before and after the Spring Festival (Chinese New Year) and Mid-Autumn Day (aka. Mooncake Festival). While "Zoupo", girls and guys can invite each other to sing no matter they know each other or not. It is seen to be impolite to refuse an invitation of singing. If a girl and a guy have a favorable feeling on each other, they will exchange cloth shoes and mooncakes.

In Longlin County of Baise City, the bride and the groom have to have an all-night drink with guests until the bride goes back her home accompanied by her bridesmaids on the next morning. The bride's absence at the groom's will last for half a month and her husband have to pick her up accompanied by his younger sister. While in Napo, another county of Baise, the new couple don't need to do the arduous drinking task, but the bride has to go back to the groom' home by riding a horse or being carried on others' back instead of on foot.

You'll be feasted with various fresh customs of the 56 Chinese ethnic groups. Welcome to China, Tracie!