Finding some interesting activities around Guilin vicinity is one of the easiest things to do, the topography and natural sceneries of this area of China being such a jewel. Living in Guilin in order to study Chinese, I woke up on a Saturday morning with no plans at all for the day except going out with friends and have some good time. Our decision was to discover all together a famous scenic spot of the city that our teachers were talking about during the lessons: the Li River Crown Cave (Guanyan, 冠岩). Bottle of water and snacks checked, we left by bus - the easiest way I've taken so far to travel in Guangxi Province - for the scenic area is located at about 29 km downstream from Guilin city, on the banks of the Li River. 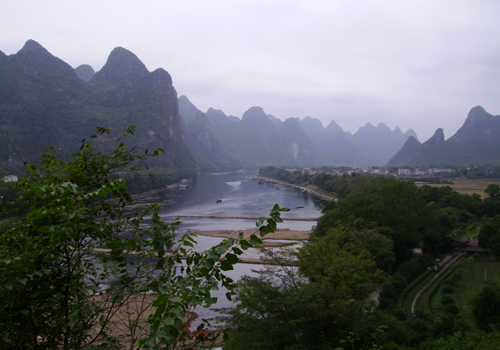 Arriving at the site at around 10 a.m. (opening hours: 8:30-16:30, 80 RMB), we had the all day for enjoying the scenic spot which was indeed located in one of the most gorgeous landscapes I'd the chance to discover at that time. The Crown Cave Scenic Area has been developed by the government and opened to the public in 1992. It is a place of experiencing different kinds of activities with unique natural beauty on the banks of the Li River and its huge karstic peaks teasing the sky. 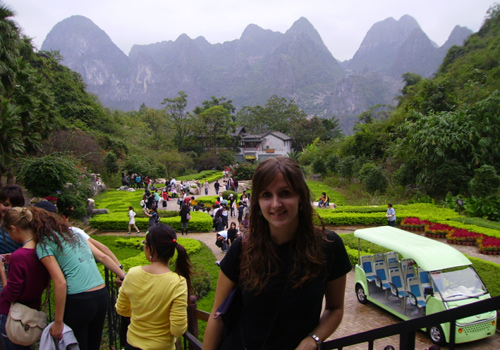 By entering the site, we could discover the little merry-go-round trains, peach and plum garden, folk craftwork shops… the way to the cave located by the mountain was interesting to see. Many little tourist buses are there for transporting people to the entrance of the cave system. Set in such a beautiful area, I couldn't help on thinking about how I was lucky to stand in one of the most beautiful places in the world. 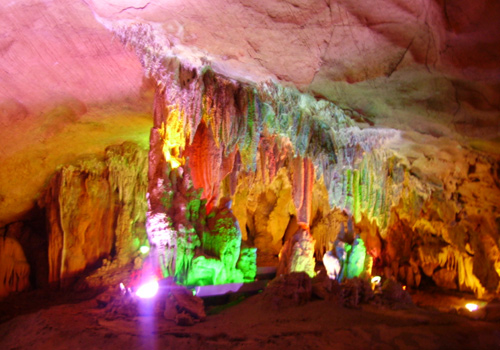 The visit of the cave started by an impressive sightseeing from the elevator going down (36m) to the main cave. The temperature changed a lot, so cool compared to the heat that was burning Guilin at that period of time. Before us, several attractions were presented starting with a little walking visit of the cave. All the rock formations had little signs written in Chinese or English so that we could "imagine" what the stalactites, stalagmites and other rocks were about. This common habit of Chinese people to call rocks, mountains and other natural formations was at first a bit disturbing for us, as we couldn't really see where the crocodile, eagle or other human shapes were supposedly standing, but by using imagination (a lot) we started to see some of them: a real work on your own vision of things, believe me! 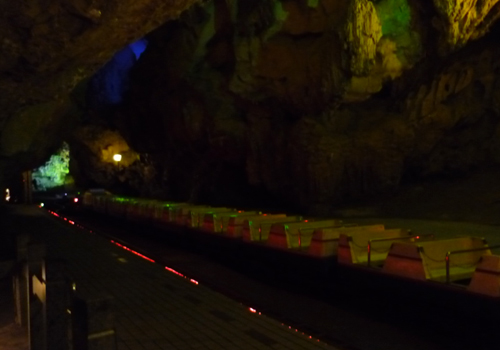 The visit continued by taking a little open train where some light color were illuminating the rocks. A funny experience considering that we were actually visiting…an underground cave! Walking a bit more in the belly of the cave, we finally reached the underground lake; visiting it sat on little boats, some pocket light were given to everyone for freely lightening the parts of the rocks we wanted. Plunged into darkness, the atmosphere was mysterious but exciting; it felt like entering in another world, like the first men actually did years ago. I kind of felt like in an Indiana Jones movie! ;) Capturing our imagination, the visit spent so fast so that by the time we finished it, it was already the early afternoon. We spent the rest of the day by enjoying the surrounding mountains, having a little hike on some of them, and appreciating the gorgeous landscape of the Li River. 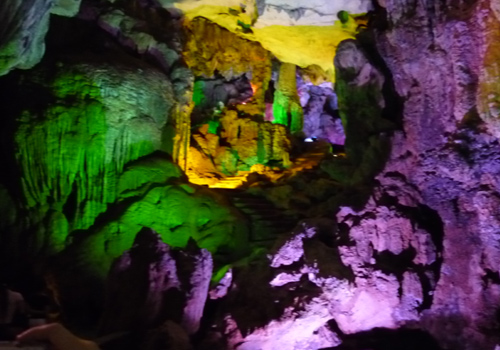 The Crown Cave is definitely one of the worth-visiting caves of Guilin as well as Reed Flute Cave. The site is mixing the usual visit of a cave with some entertaining activities. Like a kid, I enjoyed the train, boat and walking tour of the cave a lot. I extremely recommend you to opt for this cave on you way to Yangshuo. A bamboo raft cruise can be taken when finishing the visit: Guilin sceneries and tourism is definitely well arranged!
--- By Sophie (Visit Our China)
Tags: Guilin Yangshuo Li River Crown Cave Reed Flute Cave

I've visited that place several times too, the spotlights are just funny...especially in a cave! THAT is so Chinese style to me. I guess this is why we love China right? Haha

Hello Ryan! Thanks again for your appreciation on this other blog article. I can see that you are a great blogger too. Hehe, yes indeed the Crown cave and it's colorful spots on the rocks are definitely one of the most typical things to see in Guilin, totally plunged into a Chinese atmosphere! Yes, I totally agree! Though weird at the first place they give a special touch to the cave, a different way of admiring nature's beauty! Keep following us Ryan, this is a pleasure to see you here!