The future of high-speed rail in China 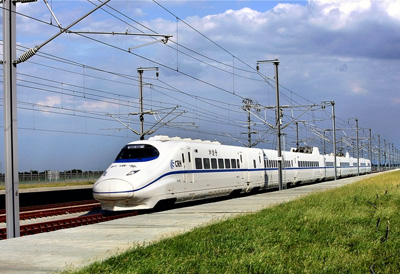 China's high speed trains use a wide range of domestic and imported technologies from Germany, Canada, France, Japan and Sweden. The Beijing–Shanghai High-Speed Railway set to open before 2012 will use the new 380A train made by Changchun Railway Vehicles Co. Ltd., which can reach a top operational speed of 380 km/h.

By the year 2014 large blocks of China will be connected by high-speed, reducing the time for travel between major centers, the journey from Beijing to Shanghai will be less than 4 hours while the time from Beijing to Guangzhou will be less than 8 hours. The benefit for China is two-fold, firstly, China will have create a much more fluid labour-market with workers and managers able to travel rapidly and cheaply between major centers, secondly, the shipping speed of heavy good will also be greatly reduced creating a significantly more efficient logistical network with the freeing up of existing dedicated passenger lines.

Once again the ambition and foresight of the Chinese government is delivering possibly the largest body of capital works ever undertaken at a record cost with a view to benefiting all the peoples of China as well as create a greener society. The ambition and vision of the Chinese government should be congratulated and encouraged; this really is a direct line to the future.