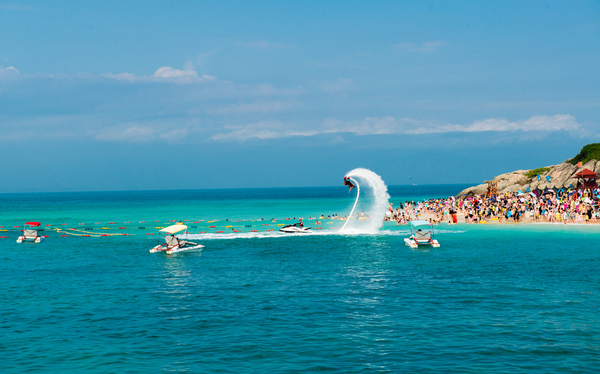 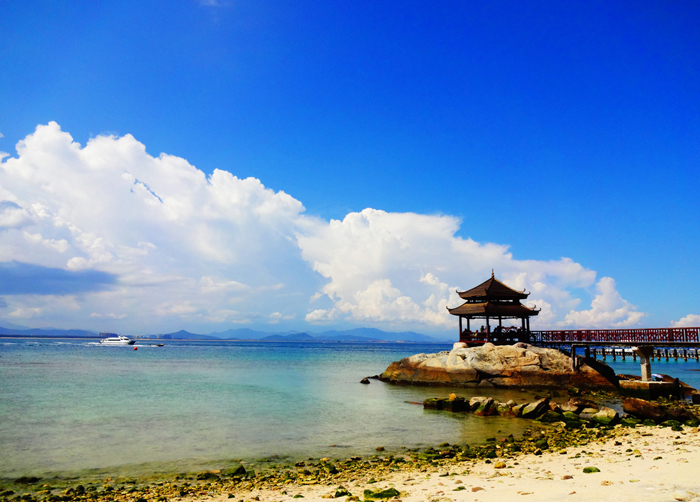 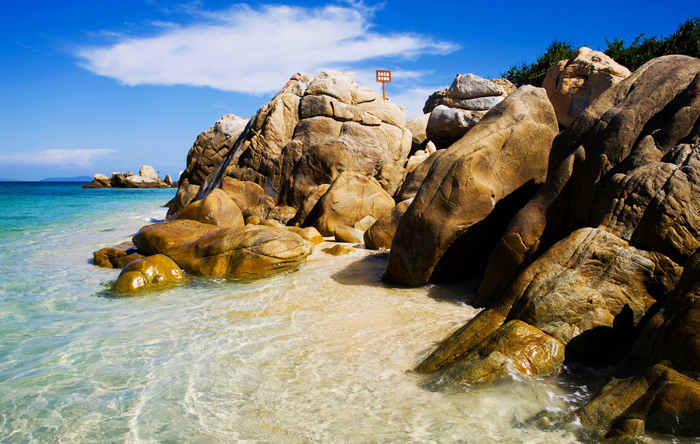 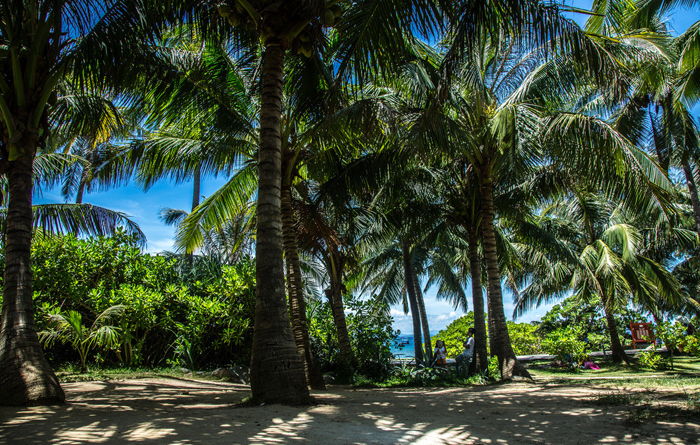 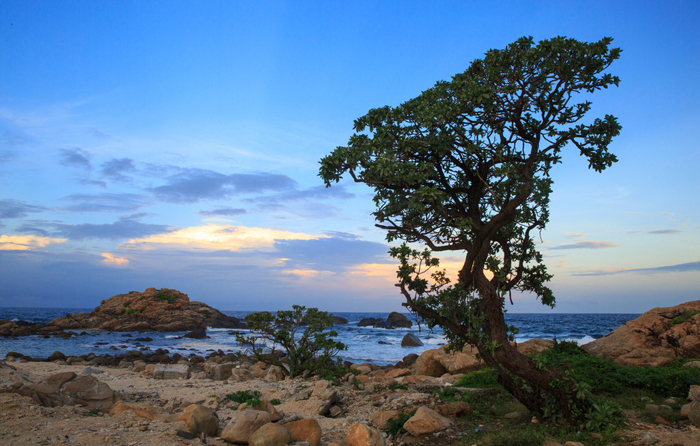 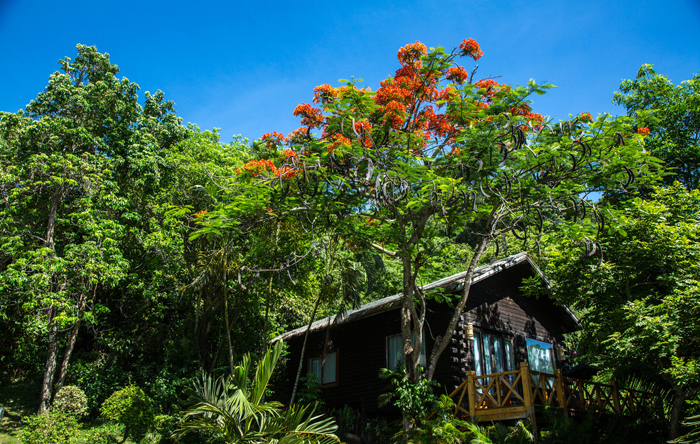 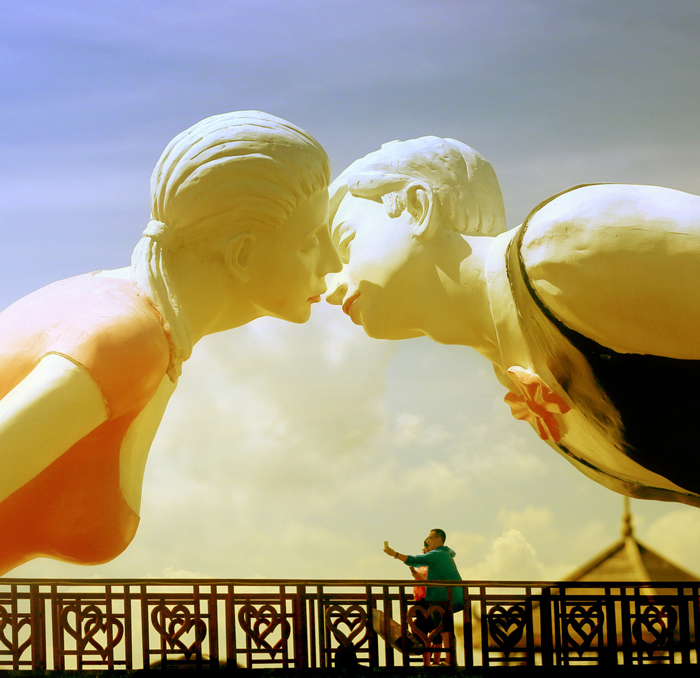 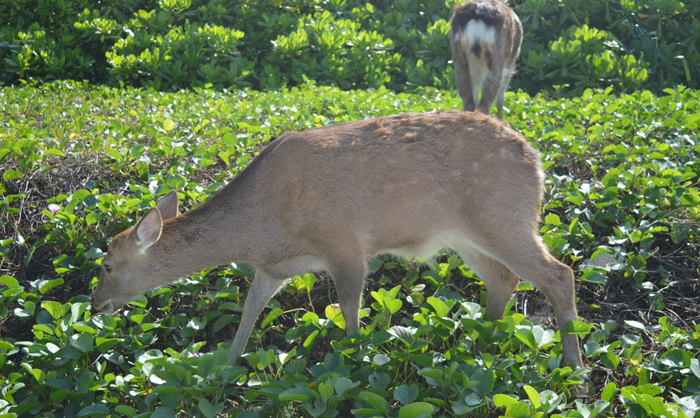 Chinese name: 蜈支洲岛 (Wu Zhi Zhou Dao).
Location: Hautangwan Town, Sanya City, Hainan Island (aka. Hainan Province).
Area: 1.48 square km.
Ticket: CNY168 (including round-trip ferryboat tickets & admission fee for the island).
Opening time: 08:00-18:00.
How to get there:
- The buses No.28 departing to Wuzhizhou Ferry Pier leave from Sanya every 30 minutes (CNY12, one hour's drive);
- Take bus No.23 at downtown Sanya, debus at Wu Zhi Zhou Lu Kou (蜈支洲路口, Wuzhizhou Intersection), take a tricycle or taxi to the ferry pier, then take the ferry to Wuzhizhou Island by ticket.
Travel Tips:
1. The earliest and the last ferryboats to the island leave at 08:00 and 16:00 respectively; the last ferryboat departing the island leaves at 17:00. The ferryboats leave every 20 minutes (The frequency might be changed depending on weather change).
2. Please keep the ticket throughout the trip, by which you can board the ferryboat for free.
3. Diving is NOT suitable for visitors with tympanitis, cardiovascular disease and cardiopathy.
4. It is advised to check weather broadcast and take along sunglasses, hat, sun scream, anti-carsickness/seasickness drug, anti-mosquito measures before departure.

Hailed as "the NO.1 diving base of China", Wuzhizhou Island is a beautiful tourist destination in Sanya with abundant and distinctive marine sightseeing resources. Covering approximately 1.48 square km, the island locates at the Haitang Gulf of Sanya, which prevents it well from typhoon area and makes it a natural world of tropical plants including dragon trees of dinosaur age. On its south and north is the Yalong Bay and the Monkey Island respectively. 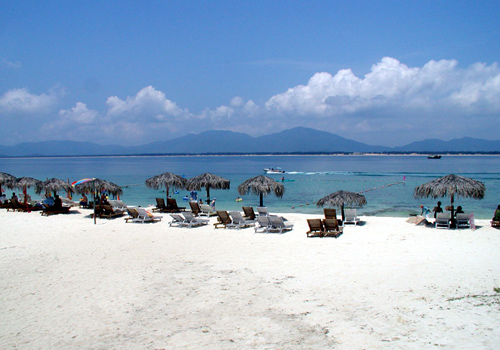 With the best-preserved coral reef of China, Wuzhizhou Island is seen as "the Maldives in China", with cirri snarling in its middle slopes, silver sandbeach winding from the west to the north, and two rocks joining the south and the east. When there are gales or spring tides, the waves' hitting against the rocks on the shore usually produces spindrifts which can be as high as ten meters. 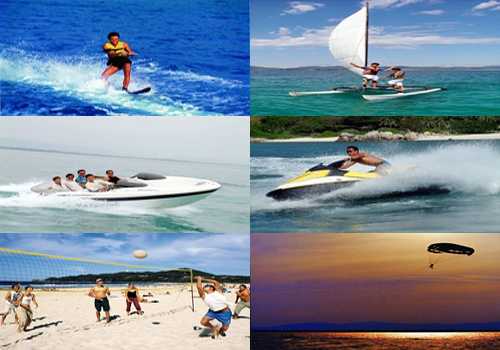 In the late Qing Dynasty (1644-1911), a Taoist priest travelled all round Hainan Island to find a place to make pills of immortality and cultivate vital energy, and finally this island caught his eyeballs. However, the news reached the magistrate of the Yazhou, which had jurisdiction over Wuzhizhou in the ancient time, before the priest built a cottage on the island. The magistrate considered that such a beautiful place with good Fengshui should be occupied by the individual but the people. Consequently, in 1893 the government raised funds and constructed a temple on the island, in which statue of Cang Jie (the inventor of Chinese characters in legend) was enshrined and worshiped. After the downfall of Qing Dynasty, the temple got unwatched and the statue of Matsu, guardian godess of navigation, was placed instead of Ca Jie. The Matsu Temple on Wuzhizhou Island today is rebuilt in 1993.

The Lover Bridge on Wuzhizhou Island was originally a chain bridge functioned as lookout. When people walked on it, the bridge always swayed and ladies usually clung to their sweetheart tightly. For this reason, the chain bridge was dubbed to be "lover bridge". But in consideration of safety, the old bridge was reconstructed to be the current blank bridge, which is also popular among lovers as usual due to its special significance. 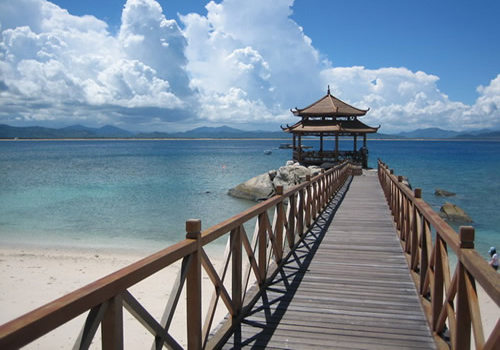 The rock is located on the cliff of southeastern Wuzhizhou Island. Standing on the rock, people can have a wide view of the South Sea.

The Lover Island on Wuzhouzhi is in fact two huge rocks erecting by each other, which are said to be turned from an unblessed couple by the angry Dragon King. No matter the legend is true or not, this site is now also a must-visit for lovers to Wuzhizhou Island.

According to annals of Sanya, a sotry goes it that a fishman and his two sons encountered from typhoon and fell into the sea, fortunately, the boat deck brought them to the beach of Wuzhizhou Island where a puddle of water saved their life; finally, the father and sons decided to settle here, so they dug a well on the puddle and supplied fishmen passing with water. Hence, the well is called "Well of Life" until today.

The Watching Sea Plank Road is constructed at the western side of Wuzhizhou. The road provides a clear seascape. If lucky enough, one can even see crabs walking on reefs or clustered tropical fish swimming in the sea.