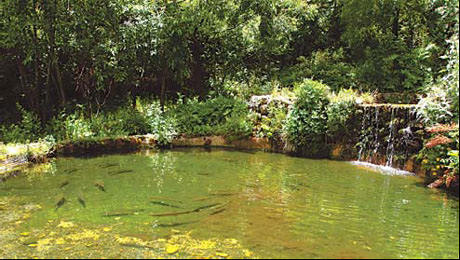 Breakfast was a perfectly-baked flaky croissant served with an equally perfect rose made of butter and thick honey. And as we bit into the hot bread, we looked out of the French windows and admired the magnificent peaks of Jade Dragon Snow Mountain, scattered with thin powdery snow that glowed in the sunrise.

That was our first meal of the day at the Banyan Tree Lijiang, the world-class resort nestled in the foothills of the Yunnan Lijiang range, at the edge of the ancient city of Shuhe.

The Banyan Tree is an unexpected sanctuary, beautifully landscaped and luxuriously appointed, with carefully crafted water features, pavilions and pagodas that reflect and blend into the natural beauty of the surrounding scenery. It stands like a jewel among the host of attractive inns that stud the Lijiang old towns of Dayan and Shuhe.

It is walking distance to the quaint shops, bustling bars and cafes at Shuhe, but otherwise, you have everything you need to relax within its walled compounds, including tranquil park-like grounds, a spa and choice of cuisines at its restaurants.

Our evening meal was a degustation from the chef at Bai Yun, Banyan Tree's Chinese restaurant. It highlighted the best of local produce, such as the region's famous wild matsutake mushrooms, black mountain goat, a herbal consomm of teal and a memorable fillet of Lijiang trout that was artfully presented.

The trout was an unexpected delight and a surprising delicacy. In fact, it piqued our interest so much that we decided to make an excursion to explore the source of such a delightful fish.

Early morning, our guide and driver picked us up and we set off upwards. The continuous drought last year had taken its toll on the majestic mountain and its peaks were so barely flecked with white that it could hardly be called a "snow mountain". However, its lofty beauty still shone through whenever the clouds parted and we spent the better part of our scenic drive snow-spotting and pointing our digitals at the picture-postcard views.

You need to pay a heritage maintenance fee as soon as you enter the mountain or visit any of its listed attractions. We paid our dues along with the other tourists.

At a scenic spot called the Jade Post Titan which is sacred ground to the Naxi people, we labored over cobbled paths and climbed steeply for about 15 minutes until we reached the trout farms.

Crystal clear waters trickled into a series of pebbled ponds, and we saw our first Lijiang trout.

They were huge - nothing like the sleek, slim trout I'd seen battling the currents in streams in New Zealand or the United States. But they were also beautiful, gleaming in the sunlight as they leisurely circled the holding ponds.

You can have your trout right on the spot, and you can net your own fish, if you have the necessary skills. We left the fishing to the more experienced, and the chef, white toque and all, spotted our fish, caught it and trotted off to his kitchen to prepare it for our table.

Lijiang trout comes served three ways - sashimi, deep-fried fish skin and a milky soup made with the head and bones.

First to arrive was the platter of sashimi, glowing a deep orange against the white plate. There is quite a bit of resilience in the bite, with a springiness that can only come from a fish that was still swimming minutes before it comes to table. The faint sweetness is distinctive, but it is the texture that makes trout outstanding.

While tuna is certainly juicier, its cottony mouth-feel makes me wonder if it is worth all that persecution on the high seas. Salmon, another popular sashimi choice, is a rich fish with a fatty silkiness, even in the farmed fish. If properly managed, trout on the Lijiang snow mountain can and will challenge salmon's position as the world's favorite fish - as long as sustainability is always first on the list.

Lijiang trout farming is still an infant industry but with the region's record in agricultural sustainability, due largely to the Naxi people's closeness to nature and their traditional commitment to protecting natural resources, this fish may soon appear on the nation's dining tables more frequently.

Trout is an easy fish to cook. It is an oily fish that is best barely cooked to retain its natural succulence. There is only the central bone, so it is also a good fish to fillet.

Taste-wise, only the lightest seasoning is needed and I can think of no better way to eat it than lightly steamed, with a hot dressing of sesame and vegetable oils, and maybe a sprinkling of ginger and scallion julienne.

Of course, with a really fresh fish, you have to have sashimi with, again, lightly seasoned dips of good quality soya and maybe grated horse radish or wasabi. Depart from the traditional and try it with soya sauce and grated young ginger, or a lemon or lime juice seasoned with freshly cracked pepper.

Here is a suggestion on how best to eat your trout. And while you are still looking for your best source of trout, a piece of salmon works just as well. 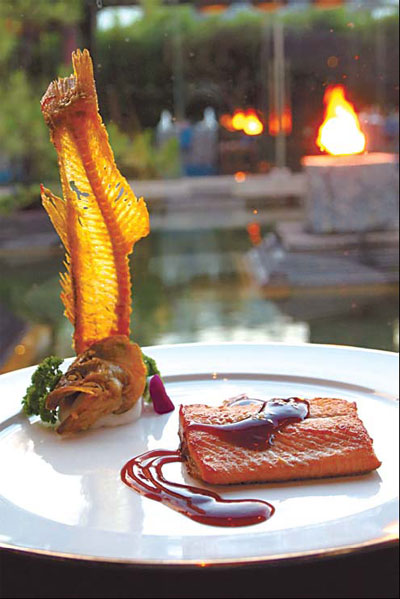 1. Check the fish fillets for pin bones by running your finger against the grain of the fish. Pluck out any bones sticking out with a pair of tweezers.

2. Dry the fish and very lightly dust with corn starch.

3. Drop the butter into a warm pan and place the fish fillets, skin-side down on the melted butter.

4. Cook the fillets four minutes on the first side. Flip carefully and cook another three minutes.

5. While the fillets are frying, make the sauce in a separate pan.

7. Add the soya and oyster sauce to the pan and stir to combine over medium fire. Mix the corn starch and water together to form a slurry and add to the pan sauces. Stir constantly.

8. Finally, drop the cold butter into the pan and stir to get a satiny sheen. Check seasoning with sugar, salt and pepper to taste. Remove from fire and serve drizzled over the fish fillets.

9. Garnish the fish fillets with toasted sesame seeds scattered over the sauce ribbons on the plate.

This is my interpretation of the Banyan Tree pan-fried trout. Pan-frying fish like trout or salmon is easy enough as long as you resist the temptation to keep flipping. Your best friend in this dish is a good quality wrought-iron frying pan or, a coated non-stick pan for the less experienced cook. The pat of butter will help caramelize the fish juices to give the fish a crisp coat. Adding cold butter to the soya and oyster sauces is an old French trick to give the sauces that nice shiny finish. And adding toasted sesame seeds is an old Chinese culinary trick to round off the taste and tactile sensation.