Your Position: HomeChina NewsTranquil temples to transport you

Tranquil temples to transport you 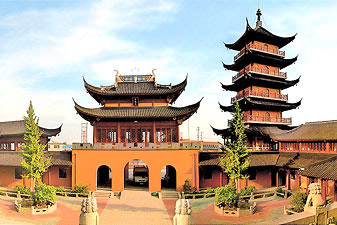 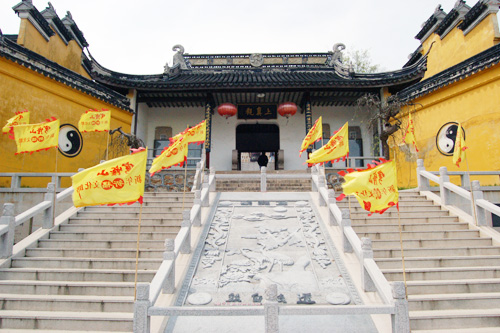 To make the scenic area in Shanghai's southwest more attractive, Fengxian District has renovated, rebuilt and meticulously restored a number of temples.

The temple was built in the Qing Dynasty (1644-1911) but was severely damaged over the years in conflicts and has been rebuilt.

In the 1970s villagers turned the 5,000-square-meter temple grounds into farmland to raise cattle and sheep.

It was reconstructed in the 1990s by the local government and in 1997 it was reopened to the public as an operating Buddhist temple. Worshippers again flocked to the site.

A 6.2-meter-tall bronze ding (ancient cooking and ritual vessel) stands in the center of the courtyard.

From the top of the Drum Tower, visitors have a panoramic view of magnificent Hangzhou Bay and even the Oriental Pearl TV Tower in the distance.

Embraced by water in three directions, the temple has three jin (courtyard surrounded by rooms) and three grand halls. It covers more than 1,500 square meters.

It was built by the Taoist Muye Yun in 1325 and was renovated by another Taoist Li Bai in 1589. In 1742 Taoist Jiang Yunshan built a pavilion in the eastern side. It was destroyed in 1853 in a political movement and was rebuilt in 1867.

Every August, a three-day temple fair is held at the temple and thousands of people attend.

Sacred to Guanyin (Avalokitesvara), the goddess of mercy, the temple was established in the Yuan Dynasty (1271-1368) and locals frequently worship there. A giant stone lion guards the front gate.

There's an interesting tale about the temple. As early as in 916, it is said, an eminent Japanese monk Gao'E traveled by ship to China and then to Wutai Mountain to practice Buddhism.

The Chinese abbot later presented him a sandalwood carving of Buddha Guanyin as a gift.

But when Gao embarked on his return journey, he encountered a terrible storm and fog and was unable to proceed.

The monk realized that the Buddha did not want to go to Japan, so the ship landed at remote Putuo Island, where Putuo Mountain stands in what is now Zhejiang Province. The monk gave the statue to a local fisherman, to be worshipped in his house.

The fame of the statue spread -- it was then placed high on the mountain, and Putuo Mountain became one of the four famous Buddhist mountains in China, and a major pilgrimage destination.

Many temples sprang up and many Guanyin statues were worshipped, so the first sandalwood Guanyin decided to find a new home. Looking out over the sea she noticed an auspicious place on the northern share of Hangzhou Bay. It was a small town facing the vast sea to the south.

She rode a strong wind, flew over the bay and reached Zhelin Town. A fisherman found her in the sand and took her home for daily worship.

News of the statue spread and villagers flocked to worship. The fisherman collected money to build a temple.

After the Buddha came, the small town flourished and benefited from rich harvests, fishing and salt trade.

To express gratitude, villagers expanded the temple and made it even grander, naming it Putuo Temple.

Built in the Yuan Dynasty (1271-1368), the temple is exquisite with a delicate exterior and interior. Two old gingko trees on either side of the front gate are said to have been planted in the Song Dynasty (960-1279).

The main Mahavira Hall is roofed with crystalline azure glaze and pillars are carved with Buddhist symbols.

The Yufo (Jade Buddha) Tower near the main hall contains a Shakyamuni statue carved from a giant piece of white jade. It's on the top floor and weighs almost 2 tons.

The temple Once contained a 2-meter-high Thousand-Hands Guanyin Buddha statue made from a century-old camphor tree. It was burned to ashes by Red Guards during the "cultural revolution" (1966-76).

Buddhist visitors to the temple first burn incense in the main hall and then enter a small room containing the Yaoshi Buddha or Buddha of Medicine, said to confer blessings of good health and cure the greed, madness and insanity of mortals.

It is one of Shanghai's largest Bhiksuni (order of female Buddhist nuns) sites and dates back more than 600 years.

As the name implies, the temple enshrines 10,000 gilded Sakyamuni Buddha statues, said to be the largest single temple collection in East China.

The temple has an aura of grandeur. It is built on a north-south axis connecting Mahavira Hall (Great Buddha's Hall), Vitasoka Buddha Hall (the protector of Buddhism), the Wan Fo Tower, the monastery entrance and the ancient city wall dating back to the Ming Dynasty (1368-1644).

A meditation hall, a drum tower, a hall of abstinence and guest rooms are neatly aligned from east to west.

Stepping into the temple grounds, visitors enter a place of tranquility and meditation, seeming far from the outside world.

Gingko trees and camphor trees tower in the courtyard, offering shade. A giant bronze incense burner stands in the center. Verandas and open corridors stretch in all directions, connecting the halls.

The three-story Wan Fo Tower along the north-south axis is the highlight.

Ascending the wooden stairs, past the Sansheng Hall on the first floor and the sutra collection pavilion on the second floor, visitors enter a room which is filled with small shining Buddha statues.

In the center is the golden 3.5-meter-high Vairocana Buddha, symbol of light illuminating the mortal world. The Buddha is seated on a 1.5-meter-wide throne carved with 10 golden lotuses, symbolizing the 10 dharma realms or states of existence.

Each lotus petal is engraved with a Buddha, which comprises 365 miniature golden statues.

Mater Xinliang is the 91-year-old abbotess who became a nun when she was five years old. She tells the story of the temple.

Around 600 years ago, Wan Fo Temple was only a shabby nunnery. In the late Yuan Dynasty, a girl from a rich family sought refuge after she fled from an arranged marriage. After several months of meditation, she took the tonsure and became a nun.

The heartbroken parents built a temple for their daughter. Locals were greatly moved by the girl's piety and flocked to the temple, which became famous and prosperous.

The temple was devastated during the "cultural revolution." In 1989 after China launched its policy about religious freedom, the temple was rebuilt and restored. It was renovated several times since then.

Today, the temple has again become a magnet for those seeking peace and refuge with the ringing of its morning bell and drumming in the evening.

Preview News: Lhasa to construct 10 major tourism projects next decade
Next News: Anhui Of China To Show Its Charm At Pavilion Week In Shanghai