Expo fever is on the rise in today's travel market, but for many visitors who have come a long way to Shanghai, one tour with the Expo Garden doesn't seem enough for all the effort. So, they seek nearby tourist attractions, among which, the ancient water towns which Shanghainese often use as weekend retreats are the most popular. 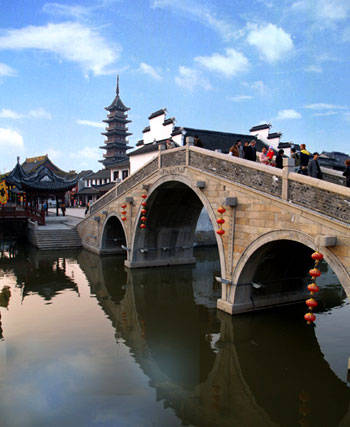 About 60 miles from the Shanghai Expo site

Located in Kunshan city of Jiangsu province, Qiandeng is considered to be a history museum, which is more because of its richness in cultural celebrities than the well preserved old houses. Qiandeng is home to father of Kunqu opera Gujian and Qing dynasty thinker Gu Yanwu. New Stone Age ruins that dates back to six thousand years ago were discovered here and are protected as national heritage.

There is also the modern side to Qiandeng. Its new town area has attracted many technology companies to build their headquarters which has greatly spurred the local economy.

Qiandeng holds a tourism festival each year from March to May and this year, in addition to the usual activities, locals will organize traditional celebrations on the Dragon Boat and Mid Autumn Festivals to attract Expo visitors. 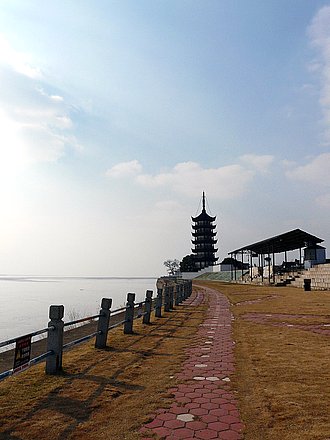 Facing the long narrow Qiantang River which reaches out to the East Sea, Yanguan in Haining city of Zhejiang province has long been a manufacturing base for salt. The small township also has a legendary tie to royalty. It is recorded history that Emperor Qianlong of Qing Dynasty visited Yanguan four times during six inspections of southern China.

However, what Yanguan is more famous for is its magnificent tidal waves. Numerous visitors flock to Haining to watch the rising tide on August 18 on the Chinese lunar calendar, a tradition that has been carried out over the last four hundred years. And in the whole of Haining city, Yanguan is the best place to view the waves. Additionally August 18, the first and fifteenth day of each lunar month, the tidal waves reach the climax, drawing viewers from near and afar.

ticket for the tidal waves viewing area in Yanguan: 90 yuan 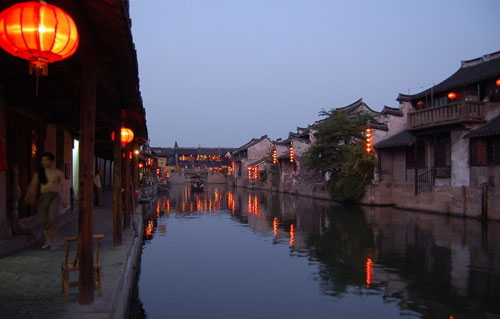 Xitang is an ancient town known for its many bridges and water-front porches. It is one of the earliest ancient towns to be commercialized as a tourist attraction in Zhejiang province.

The tranquil and lantern illuminated night view of Xitang is what distinguishes it from other similar water towns. During May to October each year, the landscape lights in Xitang would go on all night long to guide visitors touring the place during the night. Private museums housing traditional handicrafts and family heirlooms as well as opera performances also help create a memorable experience.

tickets: 50 yuan for entry, 100 yuan including individual tourist spots like museums and gardens, 30 yuan for a night time cruise on the river 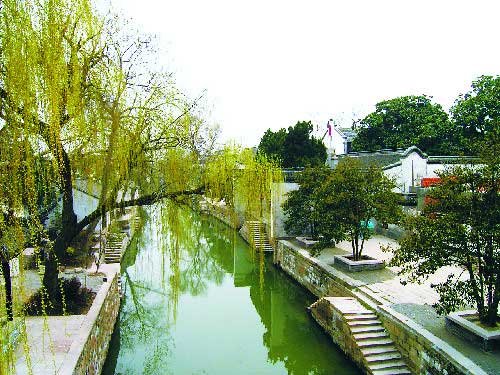 Nanxun's specialty is its gardens. It is said that the essence of southern gardens is best presented in the family gardens of Nanxun.

In particular, there is a four-hundred-year old water front residence that has 100 rooms which came to be called Baijianlou or "hundred-room building". The residence stretches along the river bank, with the rooms connected by stone bridges, each one of them intricately decorated. It used to be the dorms of the servants who work for a government official's family during the Ming dynasty.