There is a place called Qu village located in Zhanghua city, Taiwan province that has over two hundred people who have the surname Qu, and who are said to be descendants of China's ancient great poet Qu Yuan. It is one of the seldom known Qu villages. 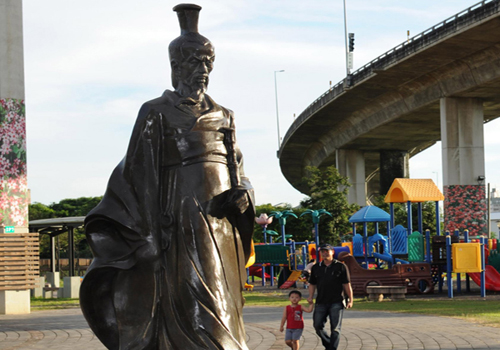 (The bronze statue of Qu Yuan sits in a park in Zhanghua city, Southeast China's Taiwan. The statue was a gift from Zigui county in Hubei province in 2012. [Photo/Xinhua])

In Taiwan, dragon boat races will be held in many places during Dragon Boat Festival, but it's a rare sight to see temples commemorating Qu Yuan. In 1963, in order to commemorate Qu Yuan, villagers from the Qu village in Zhanghua made a statue of Qu Yuan for sacrifice in the Taihe Temple.

Since then, the descendants of the Qu family have come to worship their ancestors during every Dragon Boat Festival, and Taihe Temple is now called "Quyuan Temple".

For residents at the Qu village, Zigui county in Hubei province is actually their ancestral home. The four characters "Lin Huai Yan Pai" are inscribed on the lintels of the doors at each old home in the village. Based on legend, it is believed Qu Yuan once lived near the Huai River, and these words serve as reminders to the villagers to never forget their ancestors.

Preview News: A taste of Sichuan opera
Next News: Breathtaking scenery of Zhangjiajie shrouded in rain