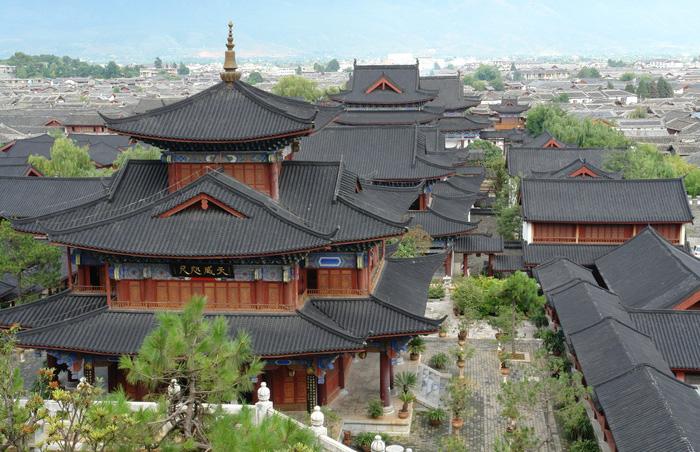 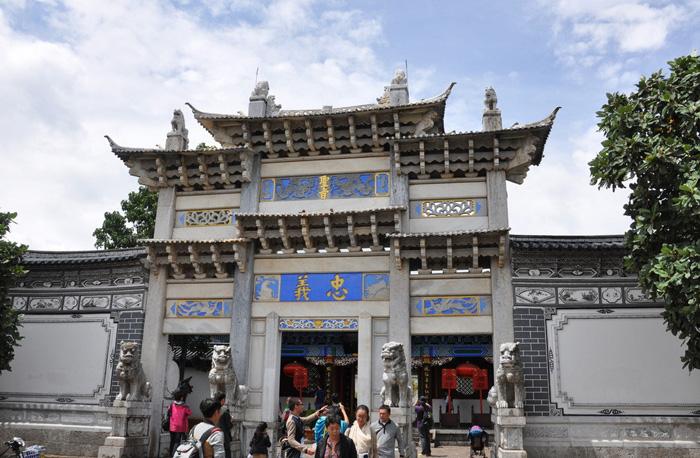 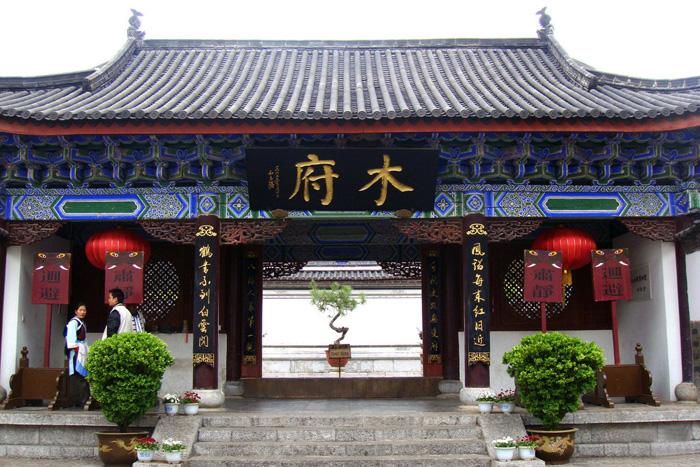 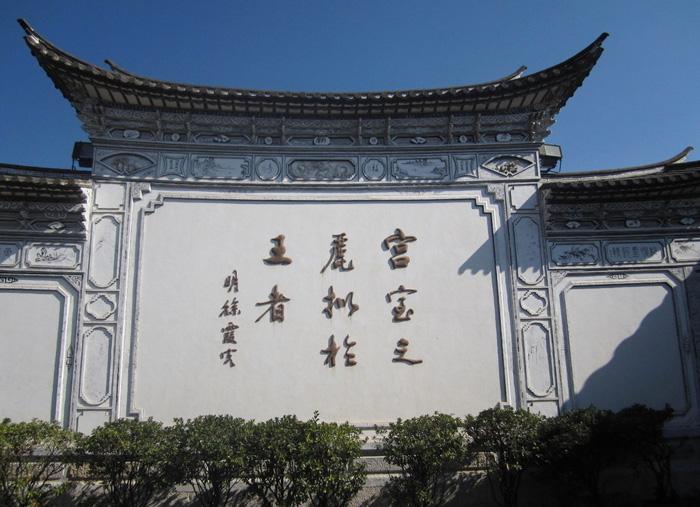 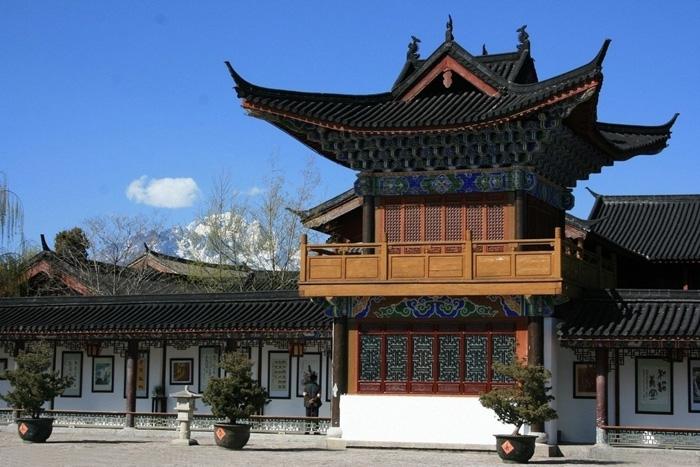 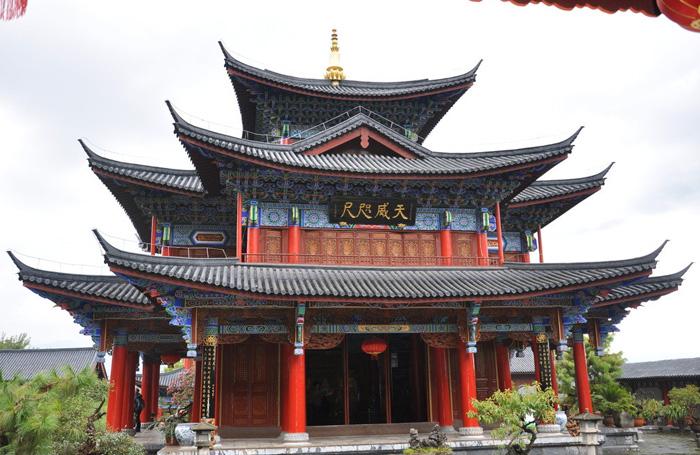 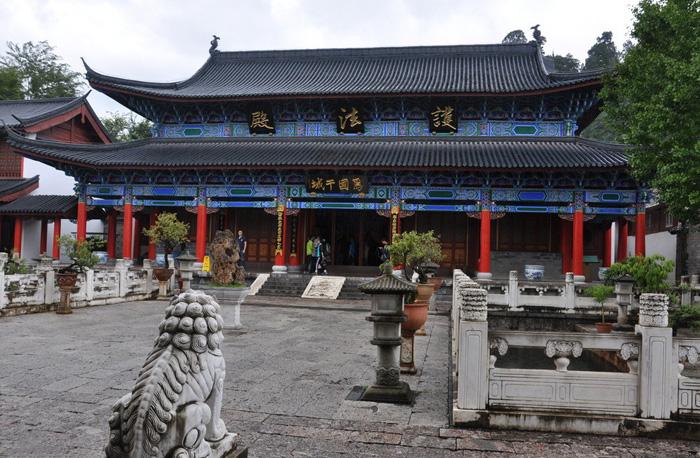 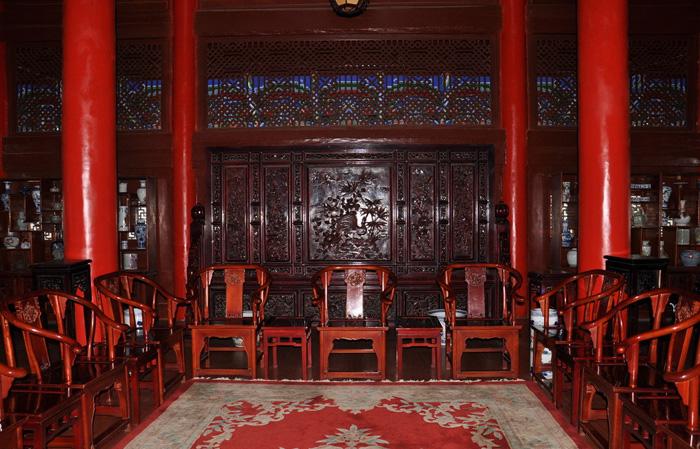 More photos >>
Chinese name: 木府 (Mu Fu).
Location: No.49, Guangyuan Alley, Gucheng District, Lijiang City, Yunnan Province.
Opening time: 08:00-18:00.
Ticket: CNY60.
How to get there: Upon arriving in Lijiang Ancient Town, walk along the small river west of the Sifang Street (四方街) for about 10 minutes.
Best time for visit: March.
Travel tips:
1. Guides of the Mu’s Residence will introduce the history of the residence and the Naxi minority ethnic group when there is a cluster of visitors visiting there.
2. On the eighth day of the second Chinese lunar month (usually falls bwteen the end of February and the beginning of March), the Sanduo Festival (三朵节), an important festival of Naxi people, will be held in Lijiang. Sanduo is said to be the guardian god of Naxi minority ethnic group and the reincarnation of Yulong Snow Mountain. During the festival, Naxi people will play Naxi ancient music and go picnic in the open.
3. Make it clear whether the local activities are free to participate before you join in them.

Brief Introduction to Mu’s Residence
Lijiang Ancient Town is well-known as one of the famous cultural heritages in China, while Mu’s Residence is the highlight of this old town. Located at the southwest part of Lijiang, the Mu’s Residence was the mansion of the Mu family, the ruler of Naxi people that ruled Lijiang for about 470 years in ancient China, as well as the government office of Lijiang,   which was built symmetrically according to imperial palace of Han minority ethnic group.

History of Mu’s Residence
In Ming Dynasty (1368-1644), the leader of Naxi ethnic group, Ajia’ade (阿甲阿得) led his people to come over and pledge allegiance to Zhu Yuanzhang (朱元璋, the first emperor of Ming Dynasty ) and be given the family name Mu (木). After being appointed as Tu Si (土司, a kind of official position in Yuan, Ming and Qing dynasties that leaders of minority ethnic groups were appointed hereditarily by emperors of the time), the Mu family built large-scale imperial style architectures such as the Mu’s Residence and the Yuhuang Temple (玉皇阁, a famous Taoist temple). The stone memorial arch in front of Mu’s Residence made of white marbles is 18 meters high and 9 meters wide. In Qing Dynasty (1644-1911), the original Mu’s Residence was burned into ground in war. Then during the reign of Emperor Guangxu (光绪, the eleventh emperor of Qing Dynasty who ruled China from 1875 to 1908), descendants of Mu rebuilt some part of Mu’s Residence but it was just a small part with three rooms.

On February 3 of 1996, a 7-magnitude earthquake befell struck Lijiang and raised the concern of the World Bank. After visiting and some investigations, the officers of the bank agreed to offer a load to Lijiang government to repair the architectures damaged by the earthquake and rebuild Mu’s Residence. The construction lasted for about 3 years and the Mu’s Residence was opened to visitors on May 1, 1999.

Neighboring Shizi Mountain (狮子山, or Lion Mountain), the existing Mu’s Residence covers an area of 30,667 square meters. Although the Mu’s Residence was designed modeling the Han style, its entrance did not face south but east, as according to the religion of Naxi, the element “wood” (木 in Chinese, one of the Chinese Five Elements Theory, concerning metal, wood, water, fire and earth), which is same character with the family name of Mu Family, should represent the East, and both element wood and the sun are holy things.

Distinguishing from houses of other rich people, the Mu’s Residence is not surrounded by walls, as the Mu family considered that the connecting walls look the Chinese character 口 and it will form another Chinese character 困 (“be trapped” in English) with their Family name 木 inside.

Besides designed with architectural styles of Han, Naxi, Bai ethnic groups, the Mu’s Residence is also a combination of royal garden and Suzhou garden collecting exotic flowers and rare herbs at its backyard.

Specialty Product of Mu’s Residence
As a liquor once dedicated to the eminent Mu Family only, the Milord Mu Liquor (木老爷酒) has had a history of more than 500 years. Fermented from selected buckwheat and spring water from Yulong Snow Mountain, the liquor is processed by many complicated and secret steps.

After the Mu Family declined, the brewing of the liquor almost disappeared until the rising of tourism of Lijiang. Nowadays, Naxi people combine their traditional brewing technology and modern production line to reproduce the Master Mu Liquor.