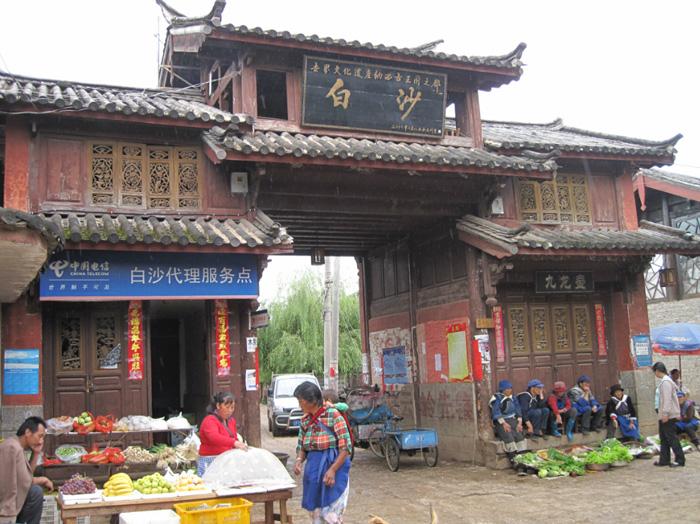 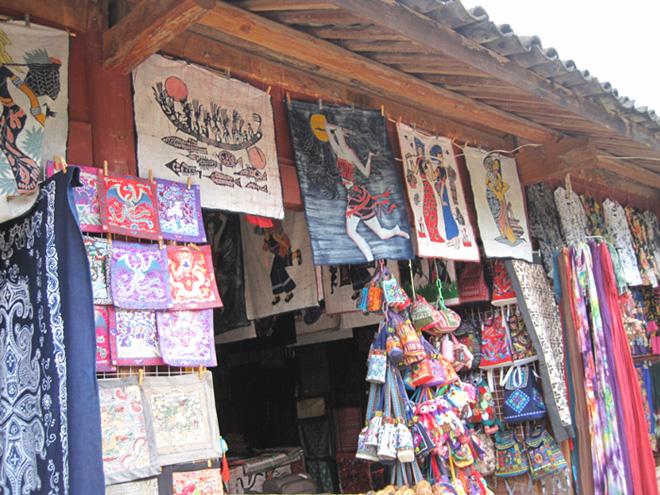 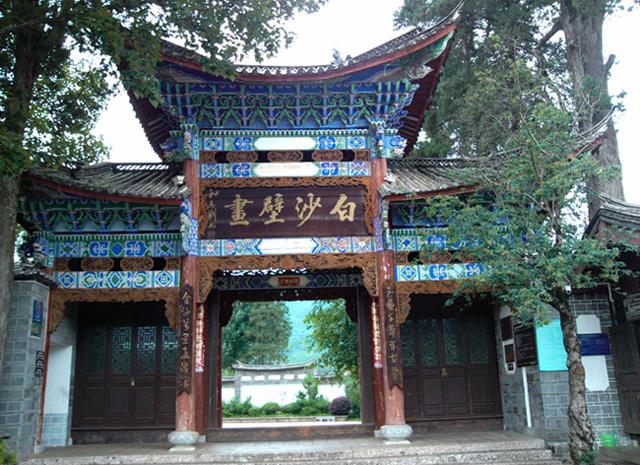 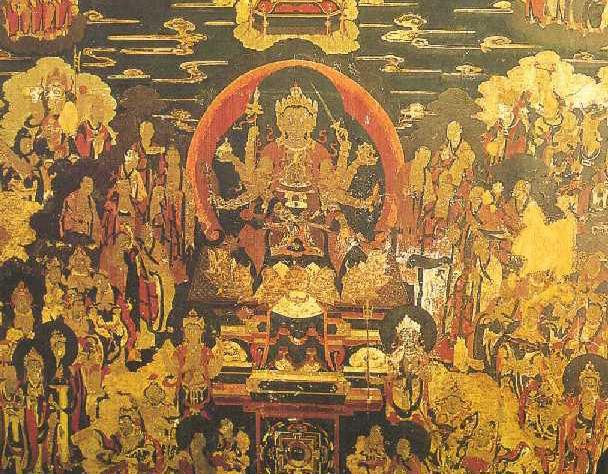 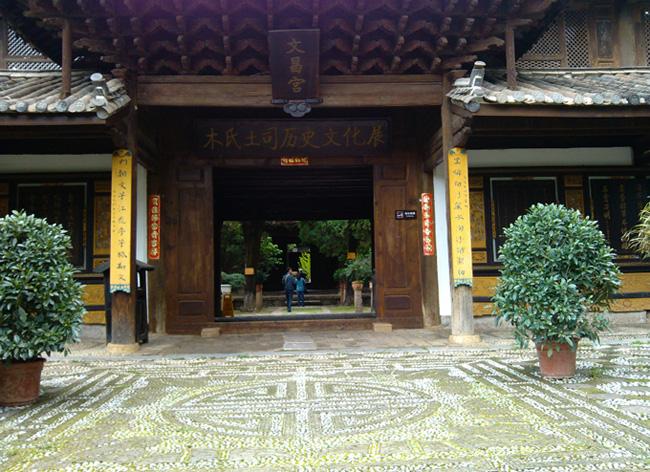 
Chinese name: 丽江壁画 (Lijiang Bihua).
Location: Baisha Town, about 11 km from downtown Lijiang, Yunnan Province.
Opening time: 08:00-17:30.
Ticket: CNY20.
Best time for visit: September and October.
How to get there:
- take bus No.6 and get off at Baisha Intersection (白沙路口, bai sha lu kou), then walk there.
- by taxi (about CNY40 for round trips).

Lijiang Mural is art heritage of minority ethnic groups living in Northwest Yunnan. It shows religionary topics such as Mahayana (大乘佛教), Tibetan Buddhism (藏传佛教) and Taoism. With earliest record which can be traced back to Ming Dynasty (1368-1644), Lijiang Murals were painted by painters of Han (汉), Zang (藏), and Naxi (纳西) minority ethnic groups by using their own painting styles to show strong comparison of each murals in lines, color and overall impression. Lacking proper protection, many of the murals suffered from natural and manmade sabotage. The existing Lijiang Murals are mainly preserved in Dabaoji Temple (大宝积宫), Liuli Temple (or Colored Glaze Temple, 琉璃殿), Dading Temple (大定阁) and Dajue Temple (大觉宫). 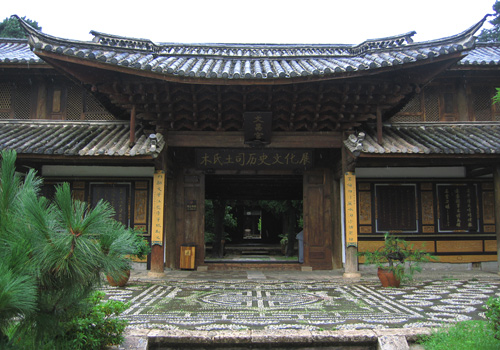 In Ming Dynasty (1368-1644), Ajia’ade (阿甲阿得), the leader of Naxi ethnic group, led his people to come over and pledge allegiance to Zhu Yuanzhang (朱元璋, the first emperor of Ming Dynasty) and be given the family name Mu (木). Obedient to assimilating the best of other ethnic groups, the Mu family introduce many outer advanced culture and skills to Lijiang, built many temples in Baisha (白沙), and invited painters from Han, Zang and Naxi ethnic group to paint on walls of the temples. The process of the painting lasted to Qing Dynasty (1616-1912), so came the Lijiang Mural.

In 1955, Lijiang Mural was paid high attention by the Central Culture Bureau and six painters and culture relic protectors were invited to research and study the murals. Then in the summer of 1956, the first group of painters and culture relic protectors with the name of China Culture Department came to Lijiang to copy from the Lijiang Murals. Until the fall of 1957, about 130 copy paintings of Lijiang Murals were shown in Beijing and attracted many people to visit, which caused another ancient culture heat after the Dunhuang Mural (敦煌壁画). After the exhibition in Beijing, the copies of paintings of Lijiang Murals were invited to exhibit in Shanghai, Nanjing, Tianjin and even in United Kingdom. 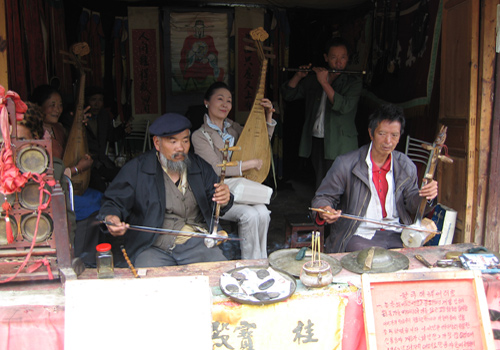 There were more than 200 Lijiang Murals distributed in 15 temples in Lijiang County in Ming Dynasty (1368-1644) while only about 55, covers an total area of about 140 meters, survive and are now preserved in Dabaoji Temple, Liuli Temple, Dading Temple (大定阁) and Dajue Temple, among which Dabaoji Temple preserve the most. Therefore, Lijiang Murals is also called Baisha Murals due to the temple’s location at Baisha Village.

Baisha, literally white sands, is located at the foot of Yulong Snow Mountain (玉龙雪山) and some 8 km from Dayan Ancient City (大研古城), getting its name for the white sand s on the earth there. It is the first settlement of Naxi ethnic group into Lijiang basin and the political, military and cultural center of Lijiang before Yuan Dynasty (1271-1368). The temples existing in Baisha today are the witness of prosperous history of Mu family in Ming Dynasty (1368-1644).

One remarkable characteristic of Lijiang Mural is the variousness of its painting style. Normally, murals in most temples around China display only one sect of certain religion, while in Lijiang Mural, visitors can view contents of Mahayana, Tibetan Buddhism and Taoism in one single temple or even in one single mural.

According to "Lijiang Fuzhi (丽江府志)", an official annals of the city of the time, most Lijiang Murals were painted by Ma Xiaoxian (马啸仙, a painter of Han ethnic group, who is good at painting scenery, flowers and people), other painters such as Guchang (古昌, who was of Tibetan minority ethnic group) and other painters of Naxi and Bai minority groups were also participated in painting. 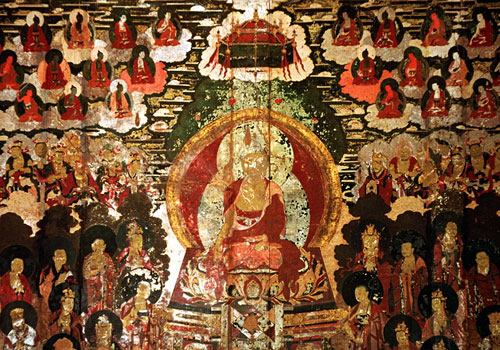 As the ones with representative pieces of Lijiang Mural, Dabaoji Temple and Liuli Temple was announced as important culture relic protection units by China State Council in December of 1996.

Liuli Temple is a multiple and gable roofs architecture built in 1417. There are 16 murals existing now in this temple, which is built on firm ground surviving from many earthquakes. The murals, 1.2 meter high and 0.6 meter wide for each mural, in Liuli Temple are the oldest among all Lijiang Murals.

Condtructed in 1582, Dabaoji Temple, which locates behind the Liuli Temple, preserves 12 murals that are the largest and well-preserved ones. Among the 12 there are four most famous murals at the Dabaoji Temple, namely, Rulai Huifo (如来会佛, Tathagata gathers other Buddha and expounds Buddhist doctrines), Guanyin Pumenpin (观音普门品, Avalokiteshvara and the Pumenpin Sutra which is the first sutra that Tathagata gave to other Buddhas), Kongque Mingwang Fahui (孔雀冥王法会, Peacock Hades holds Buddhist ceremony) and Lianhuasheng Zushi (莲花生祖师, Padmasambhava).

Rulai Huifo, the largest mural among Lijiang Murals, is 3.68 meters high and 4.89 meters wide covers an area of 18.33 square meters. 100 Buddhas are showed on this mural with Tathagata in the middle expounding doctrines, Eighteen Disciples of the Buddha (十八罗汉) on the top, three guardian Buddhas of Tibetan Buddhism on the bottom and Buddhas of Taoism on both sides.

On the north wall is Guanyin Pumenpin which is 2.03 meters high and 4.46 meters wide, telling stories of believing in Avalokiteshvara to get protection from suffering. On the south wall is Kongque Mingwang Fahui which is the same size of Guanyin Pumenpin, with Kongque Mingwang Fahui in the middle, surrounded by 28 constellations and 100 Taoist gods.

Behind the west wall is Lianhuasheng Zushi with Padmasambhava in the middle showing social life of the boarder people in Ming Dynasty (1368-1644). Padmasambhava, who came to Tibet to preach in the middle of 8th century, is the founder of Ningrna sect (宁玛派) of Tibetan Buddhism.

In addition to Dabaoji Temple and Liuli Temple, Dading Temple and Dajue Temple and some other small temples also preserving other murals.