Name in Chinese: 云台山(yun tai shan)
Location: in the south of Taihang Mountains and on the junction of provinces of Henan and Shanxi, Xiuwu County, Jiaozuo City, Henan Province.
Opening time: 08:00-18:30
Entrance fee: the ticket is effective within two days; - CNY180 in peak season from March to November; - CNY120 in low season from December to February. Best time for visit: all year around Suggested amount of time for visit: 2 days. How to get to Yuntai Mountain: - Departs from Zhengzhou, there is only one bus runs to Yuntai Mountain Scenic Area at 08:30 every morning at Long-distance Bus Station; if miss it, take bus to Jiaozuo City first and then transfer to the mountain; - In Jiaozuo, take shuttle busses at Tourist Bus Station and ride for 30 minutes; the bus departs every 30 minutes during high season. 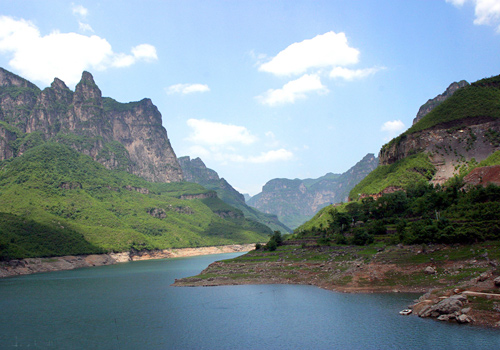 Introduction to Yuntai Mountain of Jiaozuo

Yun Tai Mountain is in Henan's Xiuwu County, an 1,000 year old county, it is Henan's only 5A tourist sight, and it is listed in the world's geo-parks listings for it's unique karsts geological landforms, also well known in china as Yuntai formations. It is a national forest park, a national water scenic area, and a Macaque nature reserve. The park is approximately 190 square kilometers in size, that includes Quan Bao Gorge, Deep Pool Waterfall, the Red Stone Gorge, Zi Fang Lake, Wanshan Temple, 100 Rock, Fairy Garden, Saint Peak, Die Cai Cave, Qing Long gorge, and China's highest waterfall, 314 meters high (1,030 feet). The park has 36 mountains, 20 caves, countless lakes, streams, springs, and waterfalls. The park's main peak, Zhuyu Peak, or Cornel Peak, has an elevation of 1304 meters, and will make you feel like you could reach out and touch the sky, or step out and walk on the clouds, but don't do that.

The park is in an absolutely beautiful lush green forest, which is a beautiful background for all the gorges, lakes, streams, and waterfalls found in this huge park. The park is covered in flowers in spring, in summer all the lush green trees are an excellent escape from the heat, in autumn the landscape changes from green and lively, to red, yellow and relaxed. And in winter all the waterfalls, turn into pillars of ice, like an ice palace. Yuntai geo-park includes some amazing sights like Red Rock Gorge, Deep Pool Waterfall, Quan Bao Gorge. 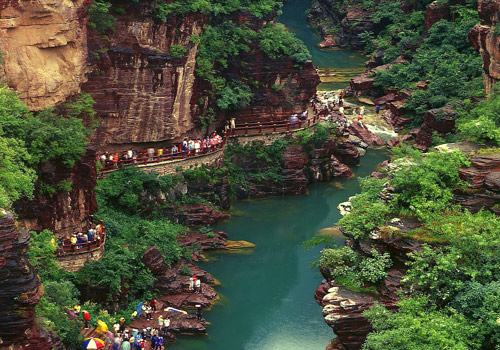 Red Rock Gorge, also know as Red Cliff, is located near the Zi Fang Lake, belong to land formation rarely found in China. This landscape is praised by experts to be, "a pure natural landscape". At the end of this beautiful gorge is a 50meter high waterfall, known as "first light waterfall".

Deep pool waterfall is located a little north west of Yuntai Mount; it is the main source of water for Zifang Lake. The channel it runs is about 1270 meters long, the stream that runs here is called little dragon creek, it's bed rock is made up of different colored stones, different sized stones, wide, narrow ones, and unique natural rock steps. The sound that the creek makes, and the way it moves are compared to that of a beautiful voice singing, and a master dancer dancing. So come on down watch this eternal show, and walk away knowing you've seen something that's been going on for thousands of years, it should make you feel special. 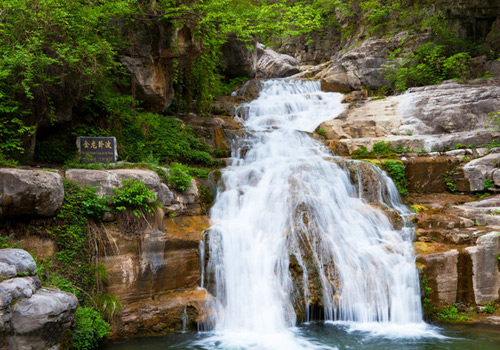 It is said that in ancient times a dragon came to save the people from a drought, but because the dragon went against the jade emperor's orders he became the river that runs through the gorge. This gorge runs for about 3km, and along the way passes some notable peaks, and springs; Lu Gong Peak, Qi Pin Zhi Ma Guan Peak, Immortal Peak, Peacock Spring, Whisper Spring, and more. Then it drops into a 314-meter high waterfall. So don't swim in it.

Zhu Yu Peak is 1308 meters above seawater; on the peak there is an amazing Zhenwu Temple, a sky bridge, and an aerial ladder. Standing on this peak is like standing on top of the world, you can see for miles upon miles. It's said that on a clear day you can sea the Yellow River. Here you'll feel like you can reach at your hand and grab a hand full of blue sky, or step out onto the clouds below you. Just being here will refresh you, the airs clean the scenery is beautiful, and you'll feel like a bird, and let's face it that's a great feeling. 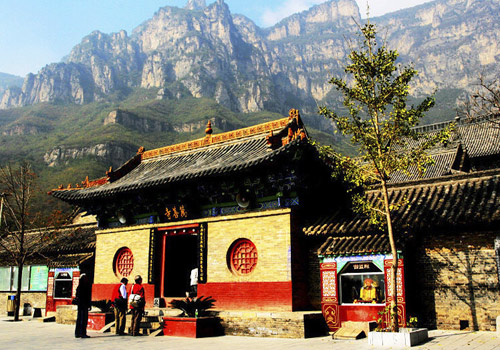 Located on a nipple shaped mountain is an amazing temple, built in Ming Dynasty (1368-1644), however now the temple is under reconstruction since 1992. Placed inside the temple is a 2 meter tall Buddha, valued at 600,000RMB, which was donated by the Thai-Sino state department of Thailand as a gift. Along with the 2 meter Buddha, inside there's also other gods, along with a line of springs, and wells.

Along with all these beautiful sights, you can also enjoy monkeys! That's right they have a monkey nature reserve in the park, and the monkeys have been trained to pull carts, dance, and do military displays. So bring some bananas or nuts and see the monkeys and have a good time.

Don't forget your camera on this trip; you'll regret it for the rest of your life. This park is truly something great.