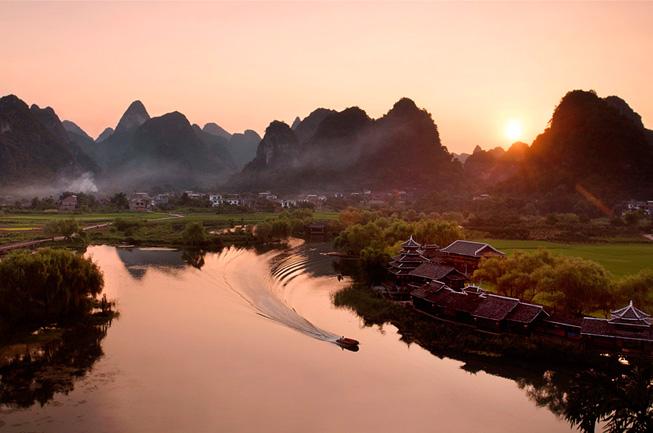 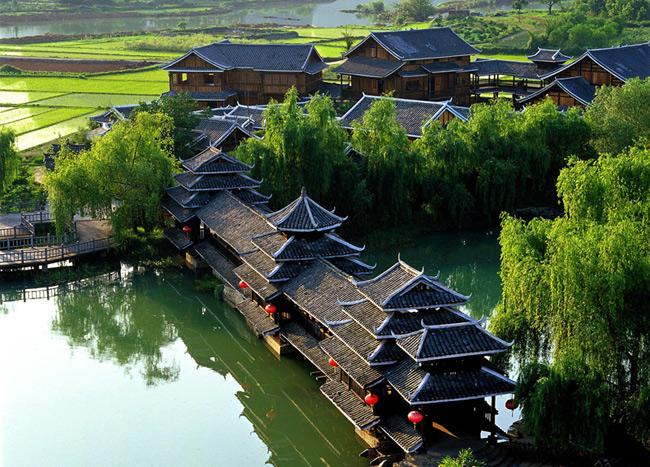 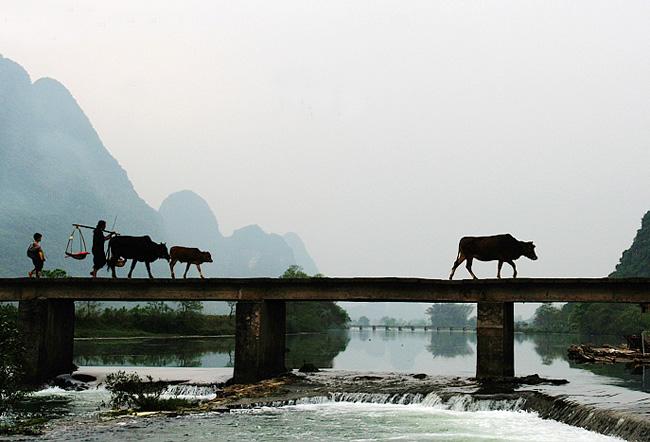 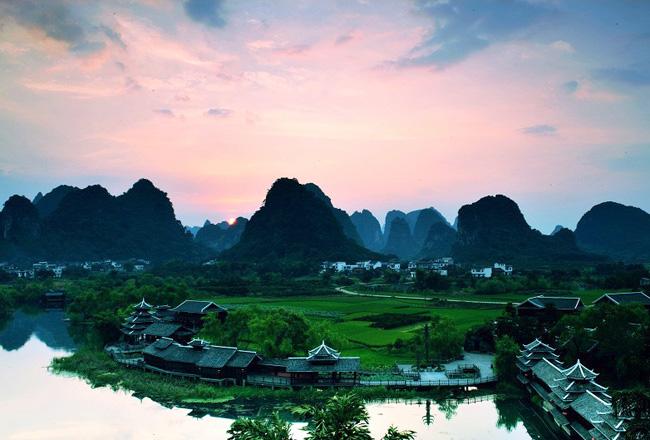 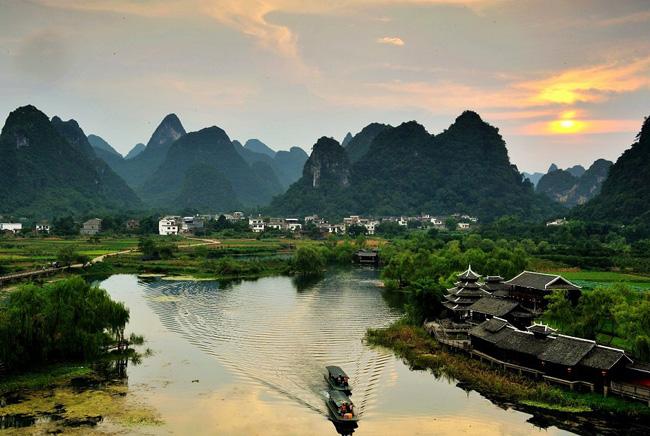 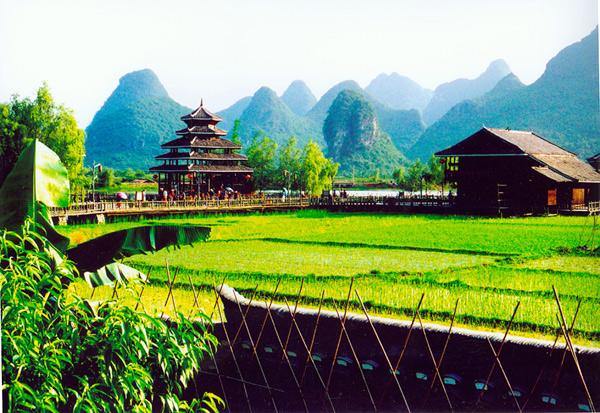 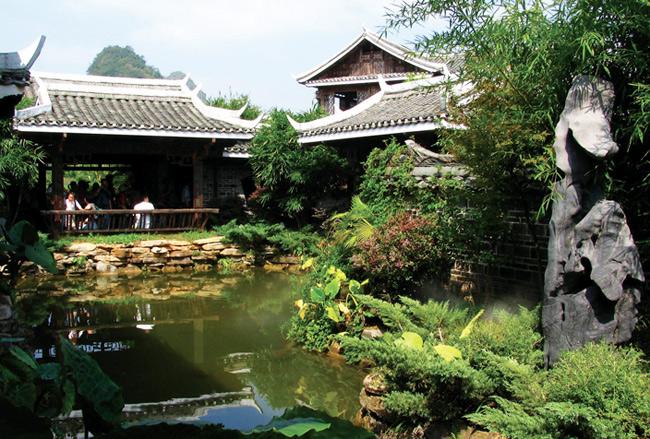 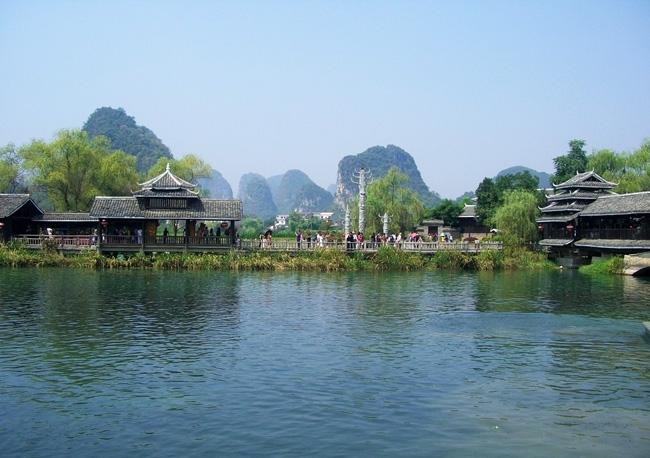 Location: On the Guilin-Yangshuo Road (49 km from Guilin, 16 km from Yangshuo), Yangshuo County, Guilin City, Guangxi Zhuang Autonomous Region (aka Guangxi Province).
Opening time: 8:30-17:30
How to get there: If you depart from Guilin, take a bus heading to Yangshuo at the square front of the Guilin Railway Station and get off at the Shangri-La scenic spot located near to Baisha Town of Yangshuo County – it takes about 1 hour. If you depart from Yangshuo, take a bus at the exit of the Yangshuo Bus Station and get off at the spot – this way takes about 20 minutes. Signs will help you find the place smoothly. Please note that the shuttle buses at the bus stations of both Guilin and Yangshuo do NOT stop on the way.
Best time to visit: all year long

A mythical research for paradise in Guilin-Yangshuo area

Everyone has already heard about the name "Shangri-La" at least once in his life. If not, then this is the good moment to know more about its meaning and the particularities of this place in Guilin’s vicinity. The name of "Shangri-La" has become famous thanks to the English writer James Hilton who wrote in 1933 about a paradise on earth and an ideal living place characterized by vast grasslands, lush vegetation, idyllic lakes and splendid gorges in his novel "Last horizon", raised today as a legend. 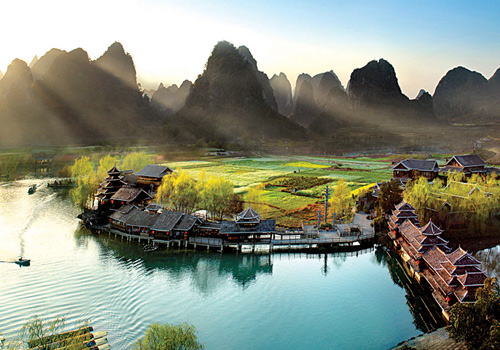 Starting from this idea, we can imagine what the Guilin Shangri-La scenic spot should look like. Called "Shi Wai Tao Yuan" (世外桃源) in Chinese, literally meaning "land of peach blossoms", Guilin Shangri-La is an ethnic theme park and tremendous highlight of the region that displays impressive landscapes and natural sceneries of great beauty. It is a harmonious paradise near to the famous Li River, rated as a 4A (AAAA) National Tourist Attraction Guilin.

History around the Chinese Shangri-La 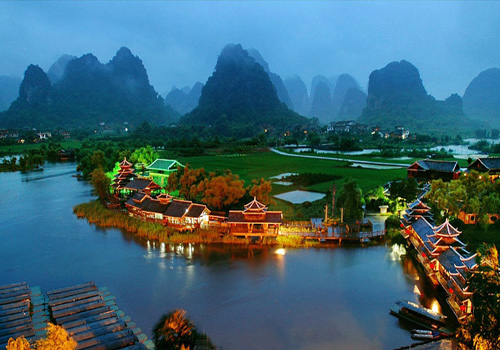 Known under the name of "Shangri-La" in Occident, this heavenly land was already part of the Chinese Culture for more than thousands of centuries ago, thanks to Tao Yuanming (365-427), also known as Tao Qian, an influential Eastern Jin Dynasty (618–907) poet in Chinese history. During his time, the poet already depicted in his works some idyllic pastoral lands hidden from the outside world that he called "Tao Hua Yuan" (桃花源, Peach Blossom Garden). Posthumously famous, Tao’s reference to this idyllic place stayed, and the name of "Tao Hua Yuan" has remained as a Chinese term synonymous with Utopia. It is a historical fact that is believed to have inspired Western countries. Based on this cultural piece of knowledge, the present Shangri-la area in Guilin is one of China’s best embodiments of Tao’s idyllic Utopia.

Particularities of the Shangri-La in Guilin city

The Shangri-La ethnic theme park is a marvel for the eyes and a soothing dream for the soul. The area is perfectly set in a hilly karstic mountains’ topography made of plains, rivers and caves. For planning to visit the scenic spot, two different ways are offered to visitors: by boat or on foot. 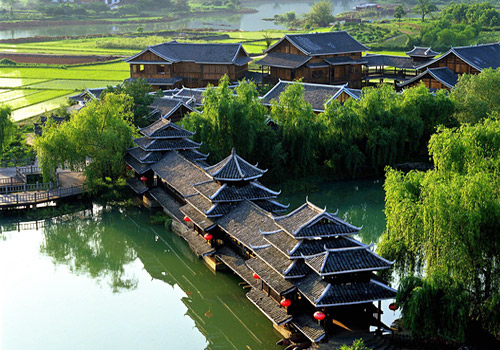 By boat is maybe the best way to enjoy the sightseeing as it enables you to have a general overview of the site. This way gives travelers an idea about the original scenery people discovered hundreds of years ago. Comfortably installed, travelers sail on gentle water, the only importance being enjoying the unique and breath-taking natural beauty of Shangri-La.

On foot, the scenery is also impressive as this is the possibility to enjoy some fetes, hunting representations and colorful folk dances of the local Dong Minority people. There lies the drum tower as well as wind and rain bridge (shelter bridge) that are famous for giving birth to the many typical pictures of Guilin-Yangshuo sceneries. Colorful and delicately ornate, the buildings pay tribute to the amazing ethnic culture of the area. When entering the park of Shangri-La, the first building that travelers have the chance to encounter is the Peach Pavilion: a black wooden five storey building with red lamps from which a general area scenery overview can be seen. To visit the park, travelers have to take some willow shaded little trails, where can be seen some totem pillars, that lead to the largest tributary of the nearby Yulong River: the Swallow Lake. This beautiful lake, divided into three parts (Inner Lake, Outer Lake and Back Lake) is of crystal clear water and gorgeous surrounding lush sceneries, an impressive view that will give you an impression of serenity and heavenly rest. Every single aspect of the place transports you in another time where ancient local religions and people used to live in harmony with nature. A rediscovered Shangri-La at the doors of Guilin city!

What to see at the Shangri-La? 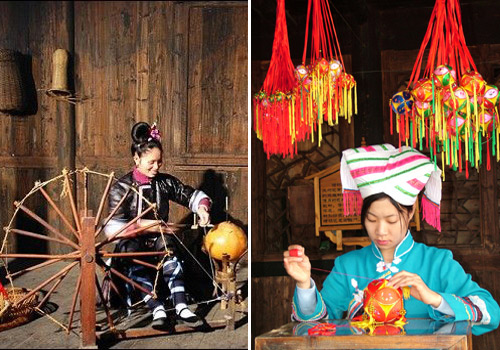 Guilin Shangri-La theme park is an invitation to marvel. The place is where to enjoy the best natural landscapes made of old trees, ancient Dong architecture buildings and folk habits. Various art crafts, souvenirs and ethnical performances are there to give a memorable time to visitors. The park displays many different native customs such as for example the Zhuang love-ball tradition where a girl gives an embroidered ball as a token of her love to a boy she likes. Explained to the public, some sessions of the performance are made from the Grand-view Garden, where a woman throws this embroidered ball to visitors in order to welcome them to their village. Guilin Shangri-La is an uncommon theme park that will give you a deep insight into the local customs of this southern part of China. Enjoying a boat time or discovering every aspects of the park on foot, Shangri-La gives you a great photography session opportunity.