In the morning, Turpan is still cool, then we are ready to visit the first attraction-Ancient City of Jiaohe (Yarkhoto). Driving out of Turpan city, just find Turpan is not like a city, not big, it is more like a vintage town. The city of Turpan flourishes with many historical and natural sites of a gorgeous uniqueness barely seen anywhere else in China. 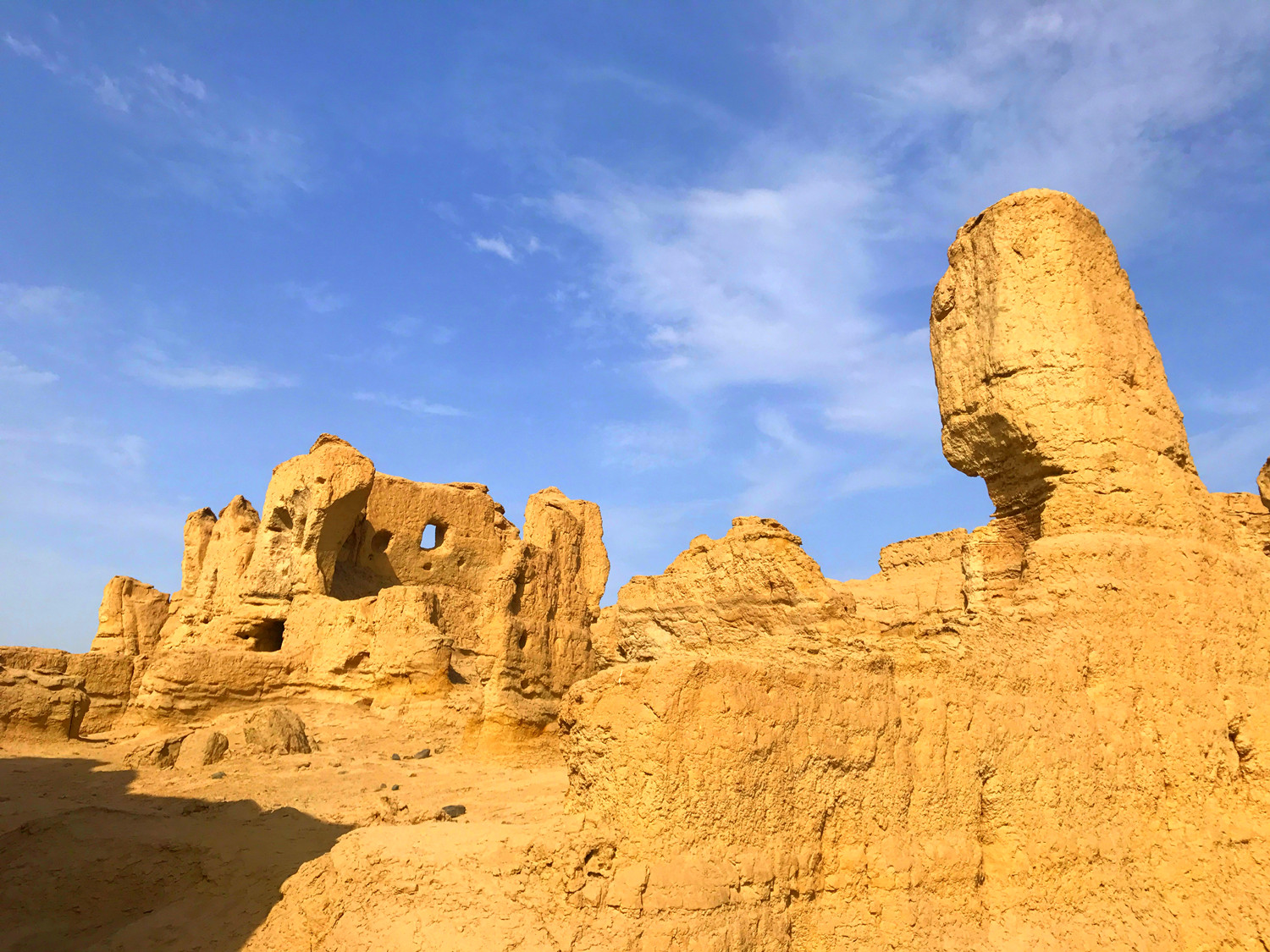 Ancient City of Jiaohe (Yarkhoto) is viewed as one of the world's largest, oldest historic sites and the best preserved raw soil buildings with more than 2,000 years. If you like walking or hiking, you can spend more than half day to enjoy any corner of the ancient city. Walking through the ancient city, everyone is touched by the long history and raw soil buildings. In Tang Dynasty (618-907), this place was the capital of the state of South Cheshi and the political, economic, cultural and military center. Ancient City of Jiaohe can go back to the second and the fifth century BC. It has remained a decade-long period of prosperity in Northern and Southern Dynasties (420-589) and Tang Dynasty, then was damaged during the 9th and the 14th centuries because of wars. Due to years of fighting and wars in Turpan at the end of Yuan dynasty (1206-1368), the place has fallen into crumbling and was deserted at last. Although you feel here somehow wild and sorrowful now, in the past this place was brilliant and splendid. 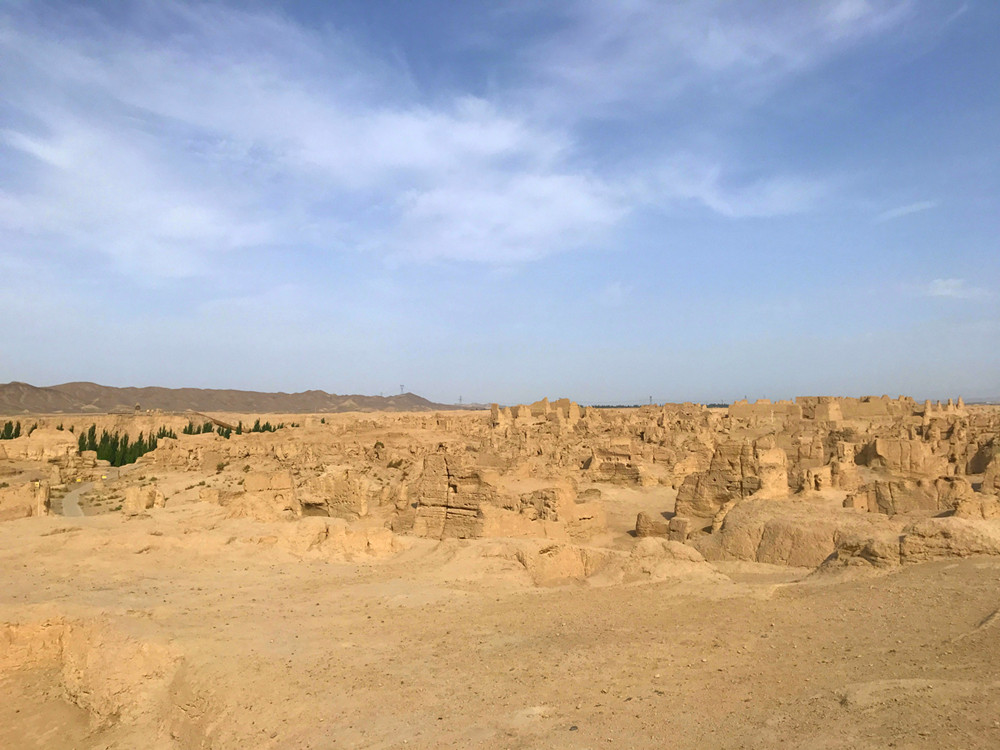 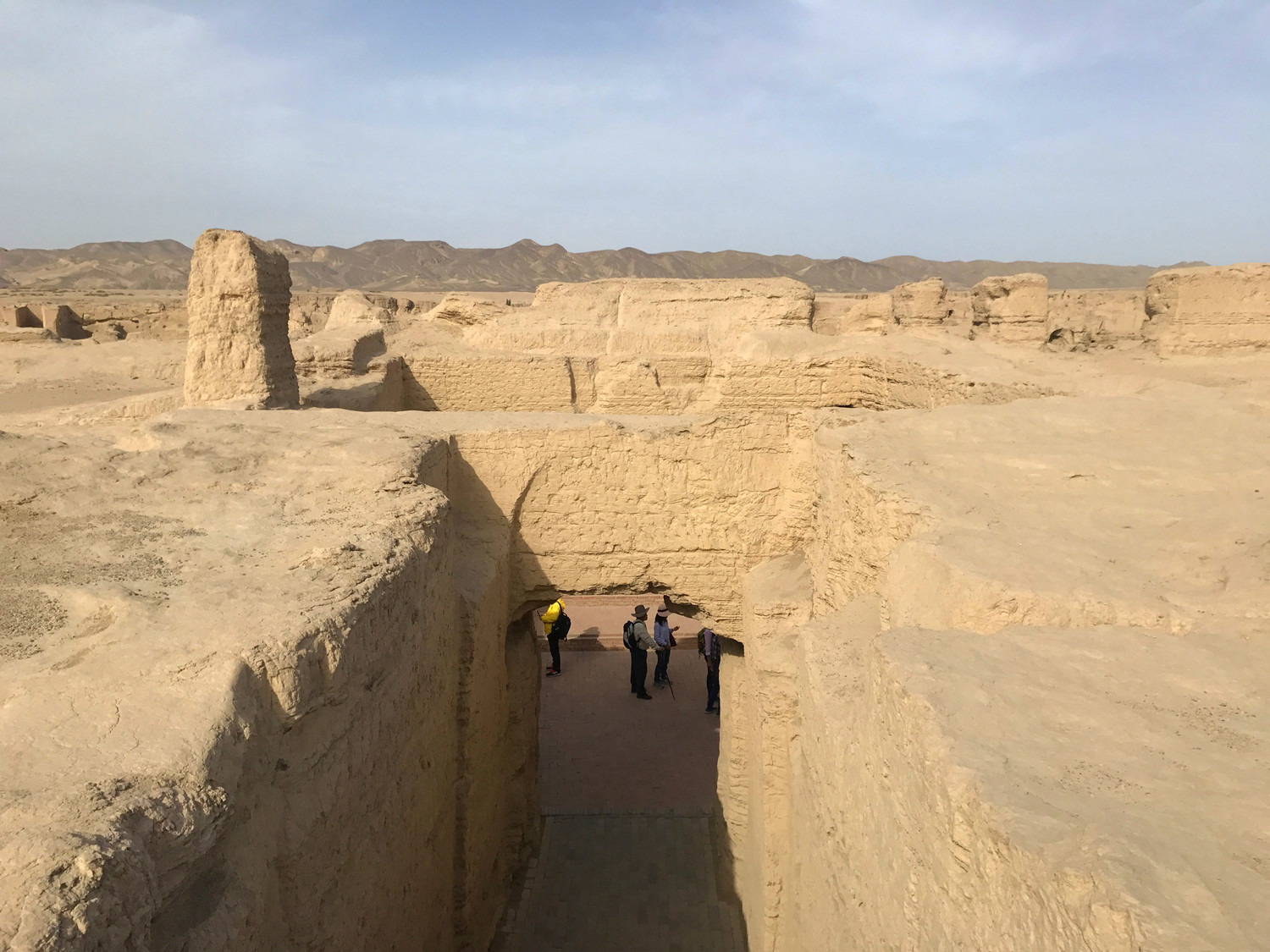 As a result of lacking of rain, Ancient City of Jiaohe is in an excellent state of preservation. All buildings were constructed by stamping earth between board frames. Its pattern of city layout is similar to the capital of Tang Dynasty, Chang'an City (present Xi’an). Inside the city, the streets, residential quarters, temple with 5,000 square meters, 101 stupas, training ground and workshops all preserve their ancient Tang styles. It is like a willow leaf when overlooking the whole city. We found the central point of the city, the Council Hall in ancient kingdom. We all sat and tried to imagine what happened here in the past. It may be difficult to believe, most of buildings in the city were built by digging the high ground surface. Raw soil features the temples, city gates, streets and roads etc. In other words, the city is a wonderful and giant ancient sculpture, which fully represents the great intelligence and powerful creativity of ancient people. By the way, it is necessary to take an umbrella with you, the sun is too hot as there is no any tree in the ancient city. 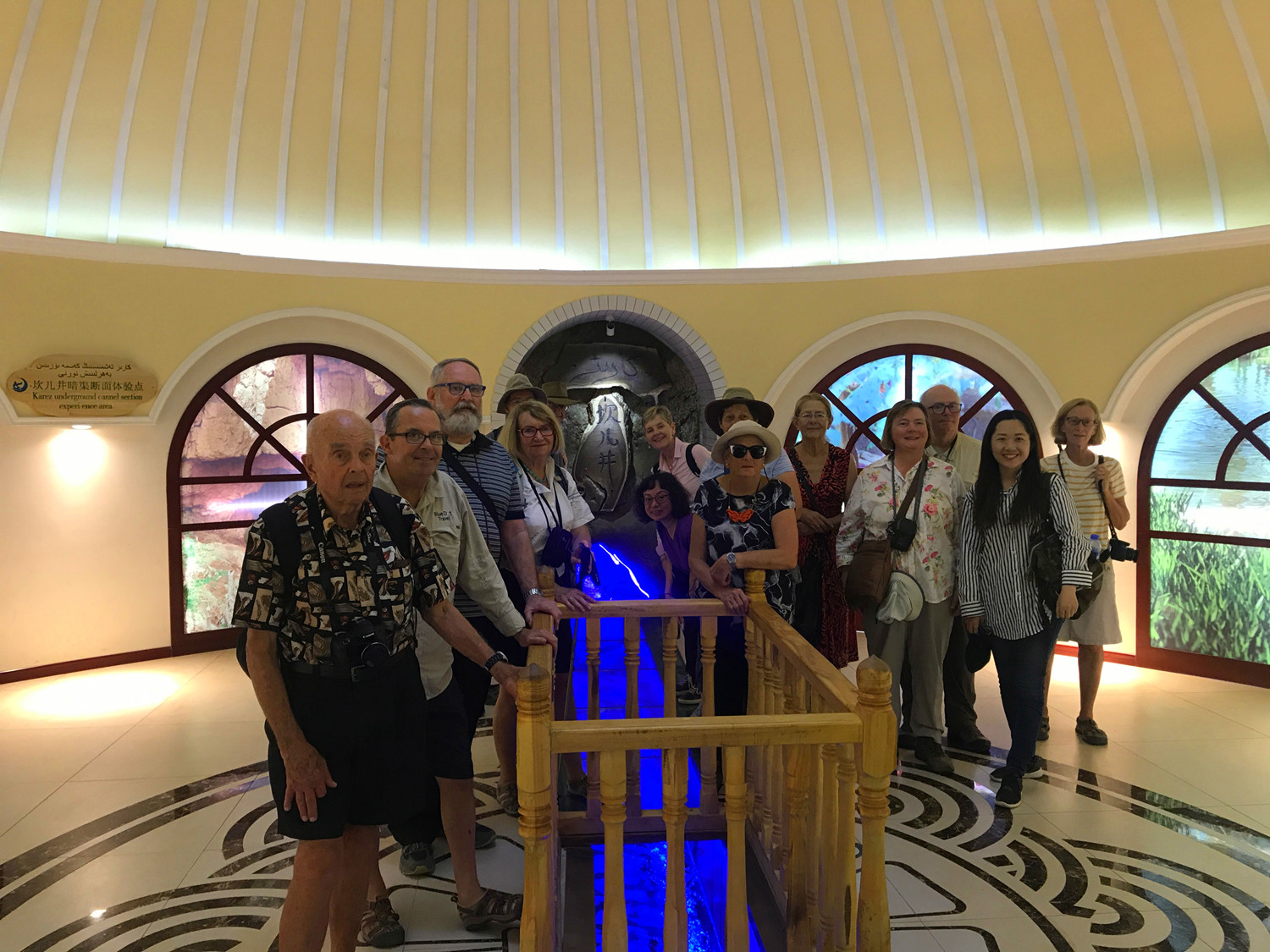 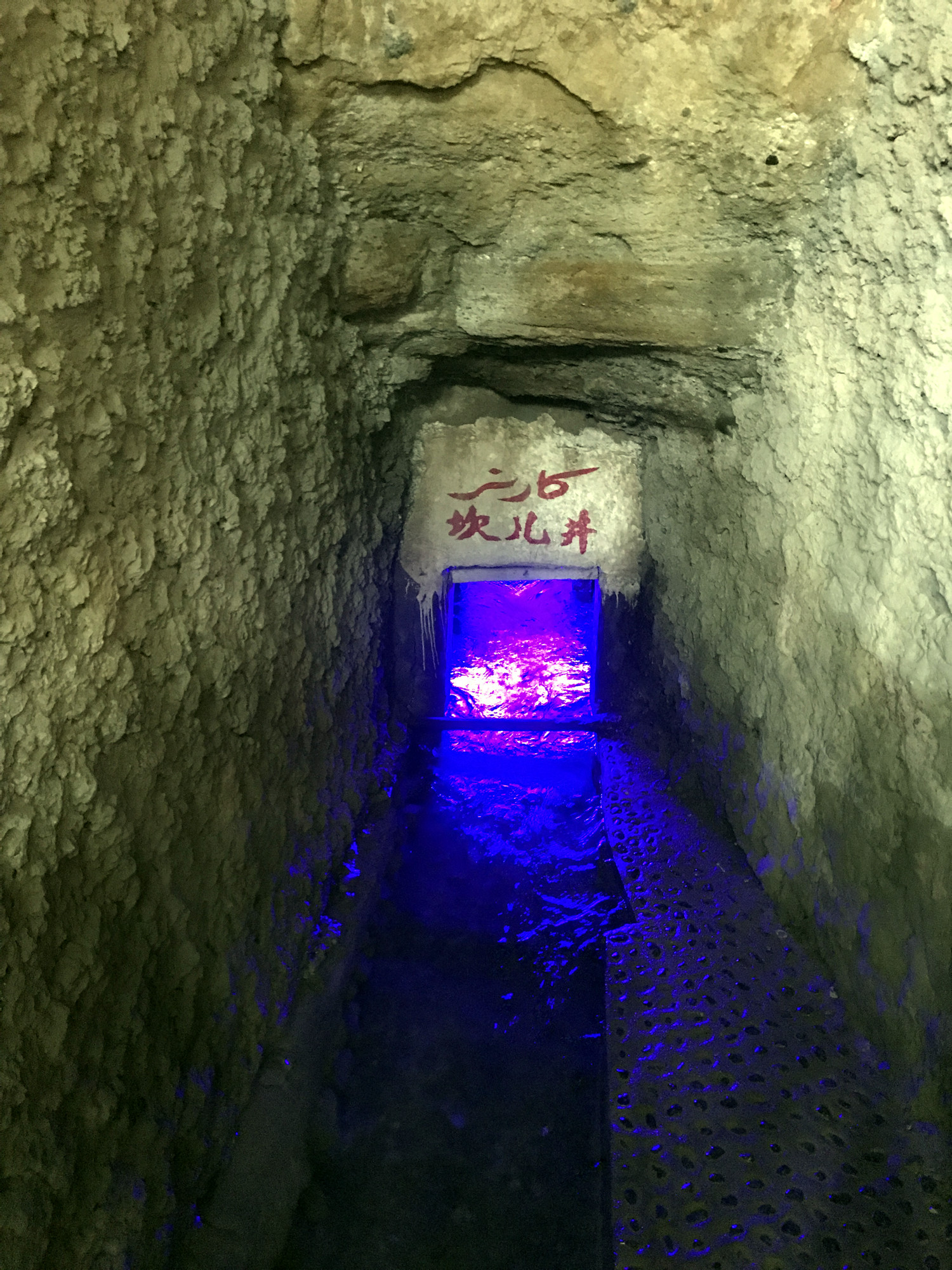 Turpan is such hot and dry, why it is still green and has the famous grapes, you might be curious about this. Karez Well System was once the main source of water for both field irrigation and daily life in ancient times. Even to this day, it continues to play a vital part in local social economic life in Turpan. Initiated about 2000 years ago in Han Dynasty (202B.C.-220A.D.), most of the present qanats of Karez Well System were built in Qing Dynasty (1644-1911). Now tourists can go inside to visit the underground well. Known as one of the great 3 constructions of China’s ancient times (the other two are the Great Wall and the Beijing-Hangzhou Grand Canal), Karez Well System is made up of about 1000 qanats, if put together they measure 5000km, that is longer than the distance between New York and California (3691km). As a matter of fact, the Karez Well of Turpan is not only a "well", but a manmade underground river, which can reduce evaporation and retain water to resolve the water shortage in the area due to the dry weather and scant rainfall. The system is consisting of a vertical well, a closed conduit underground, an open channel on the earth’s surface and a flood dam (a small reservoir). What an intelligent project from ancient human being! 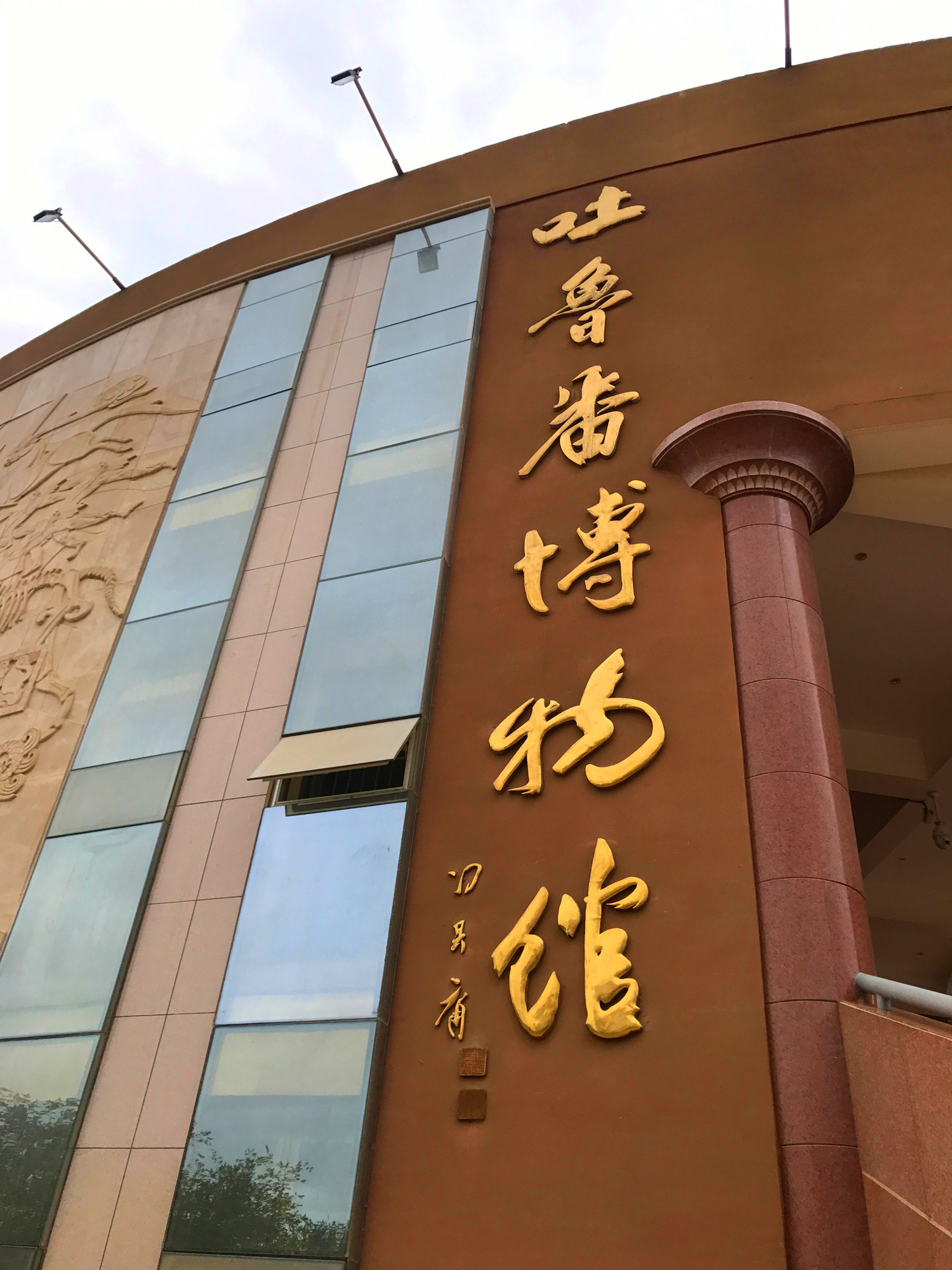 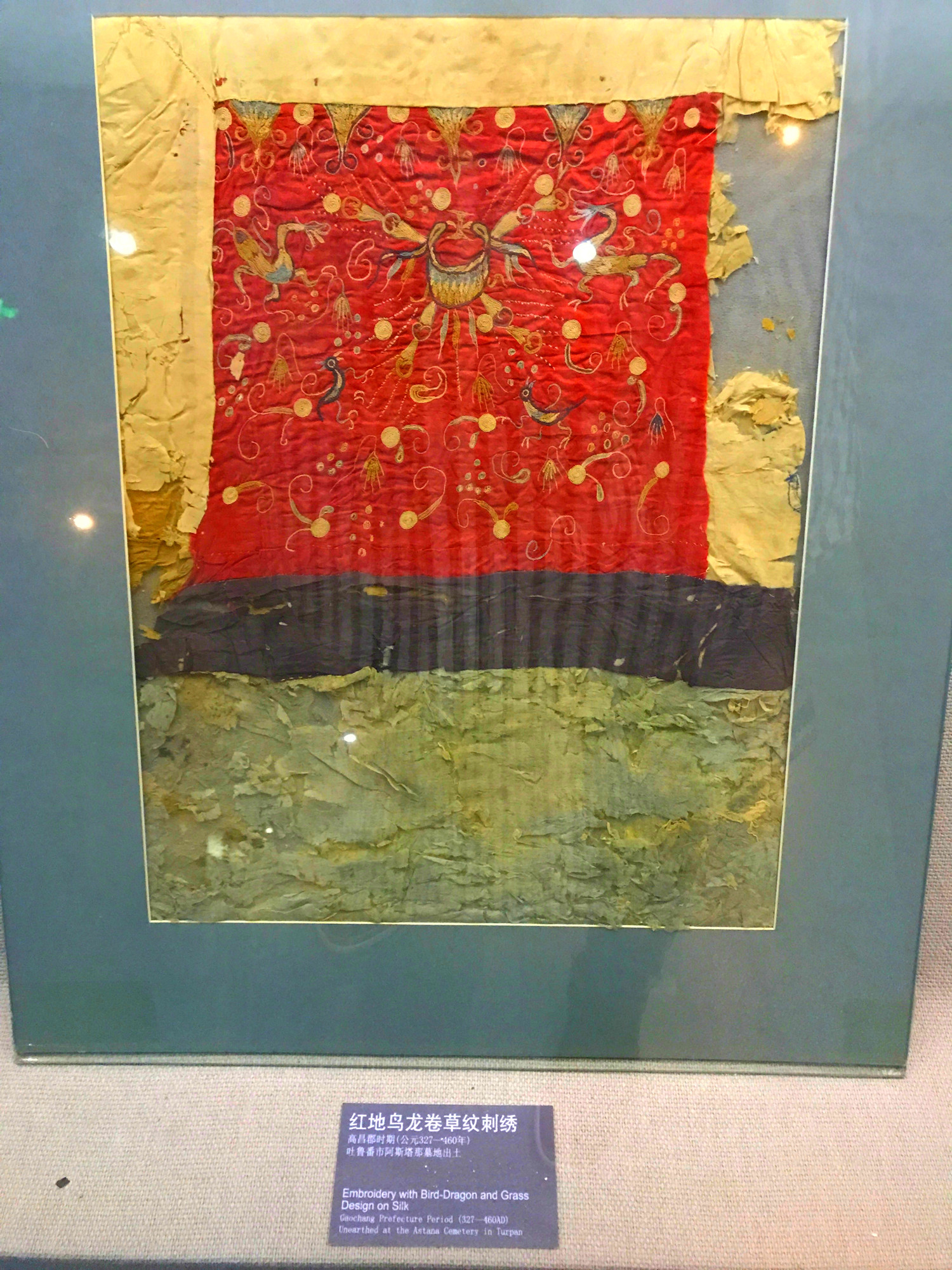 In the afternoon, we continue to visit Turpan Museum. The level and situation of Turpan Museum is like Dunhuang Museum, even better and higher class. The Museum is rich in collections, it is the second largest museum in Xinjiang and a first-class museum in China. Turpan is known as one of the richest open-air archaeological museums in the world. There are more than 20,000 pieces of cultural relics in the Turpan Museum, the world-famous Turpan dried corpses are the big treasures of the museum. Most travelers are interested in this very much. The Turpan dried corpses are different with the Egypt mummies. Due to the special climatic conditions and geographical features of Turpan, it has become one of the regions with the largest number of dried corpses in the world. In the mean time, the museum now has the earliest prosthetic limb, the earliest moon cake in the world and the earliest vines in China, also the Turpan Museum has a wide variety of silk fabrics, which is a typical cultural relic of the Silk Road. In a word, Turpan Museum is just the best place to learn the long history and details about Silk Road. 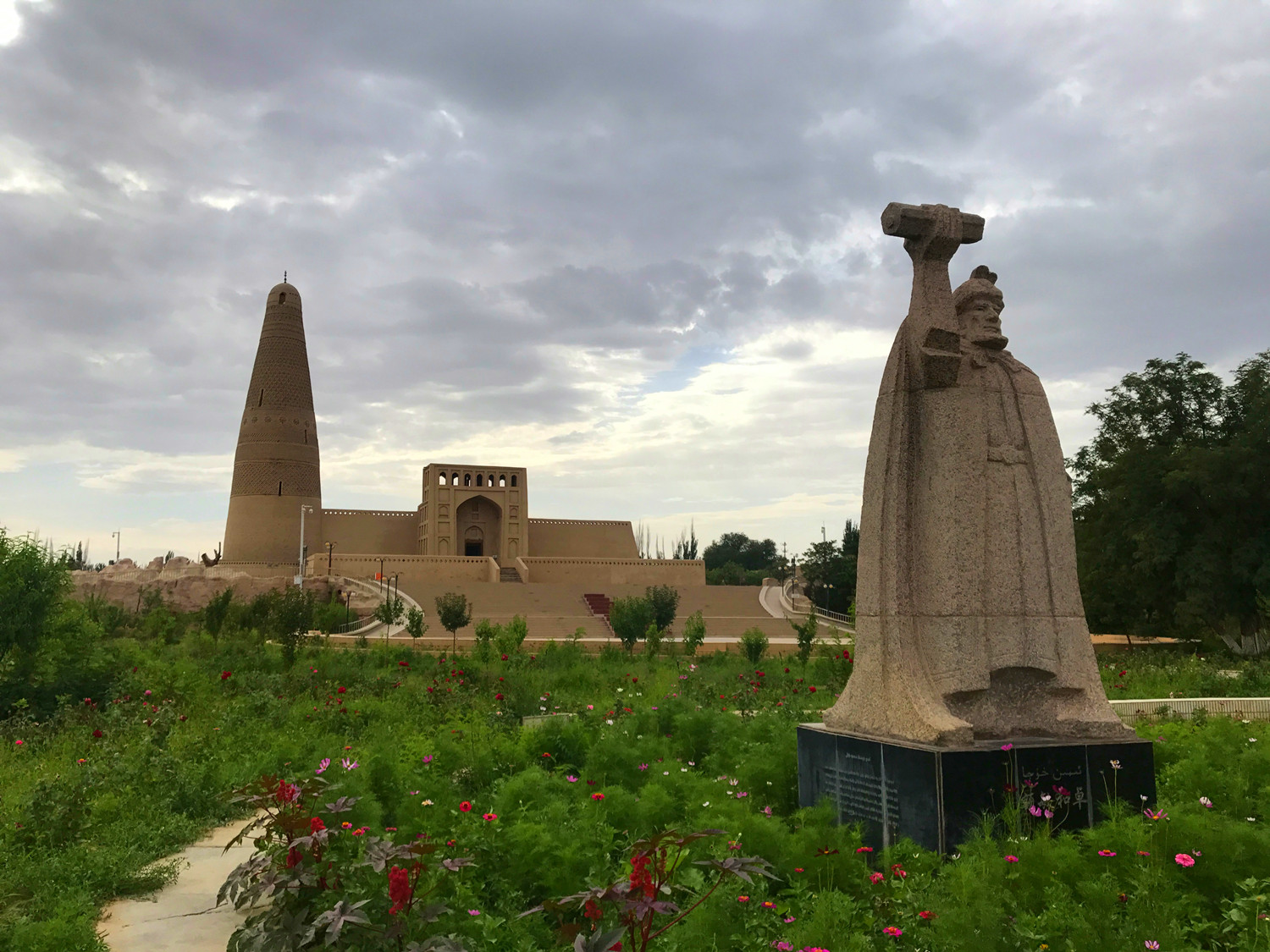 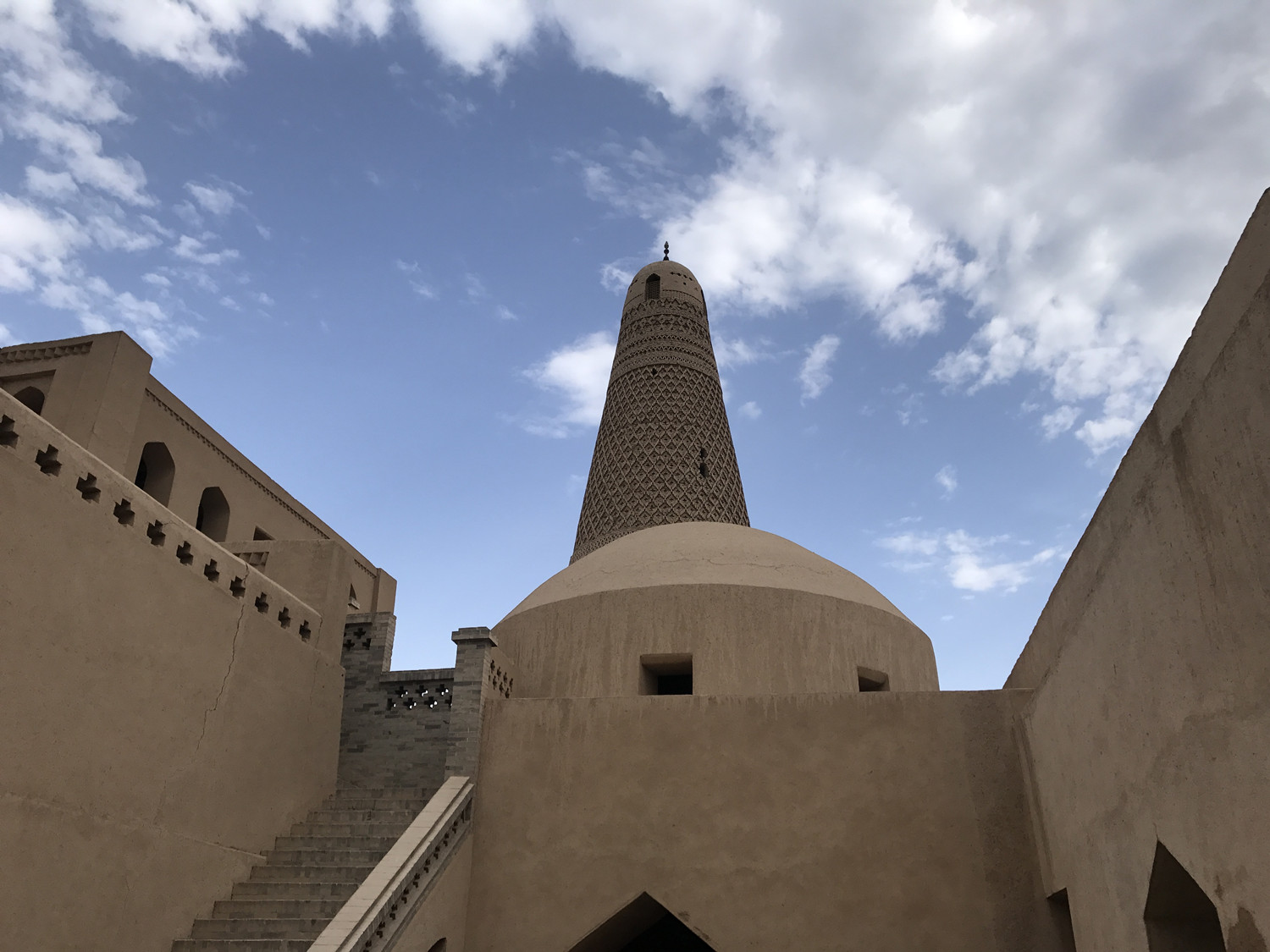 Before sunset, we visited the last site-Emin Minaret (Su Gong Ta). Emin Minaret is the largest Islamic tower in Xinjiang Uygur Autonomous Region, the great dome-shaped tower is with a height of 44 meters. The architectural design is novel and unique built with grey bricks. Emin Minaret was built in 1777 during the rein of Emperor Qianlong, in order to repay the favors to Qing Government and show the loyalty to the Allah, Emin Khoja founded the minaret. The whole site is composed of Emin Minaret and Mosque. The Mosque has a capacity of more than 1,000 prayers. It is said the mosque is one of the largest ones in Xinjiang Uygur Autonomous Regions.

Such a full day today, we learnt a lot about Turpan which is developing in thousands of years. We totally understand why Turpan is the major stop-off point to Central Asia on the Silk Road.