While I think of it, in Hong Kong automobile driving is on the LEFT side of the road. This is because as you know, Hong Kong was once a British Colony. Both Jay and I awoke at 3:30 AM. I think we will need a few days to 'power through' our new sleep cycle. The current temperature is 82F. It's 6:45 AM. We just returned to our hotel from a walk through the neighborhood. We then enjoyed a very satisfying breakfast at our hotel.

We are officially off and running on our city tour. We're heading towards Lantau Island. The airport is on Lantau Island. I was in Hong Kong in 1996. I remember the old airport very well. It was quite a quick vertical drop to land a plane at the old airport. Regarding real estate in China, Hong Kong is the 2nd most expensive city. Shenzhen is the 4th largest city in China. We have been told that many men in women in both Hong Kong and Shenzhen have a second wife or husband. The population of Hong Kong is 7.5 million. 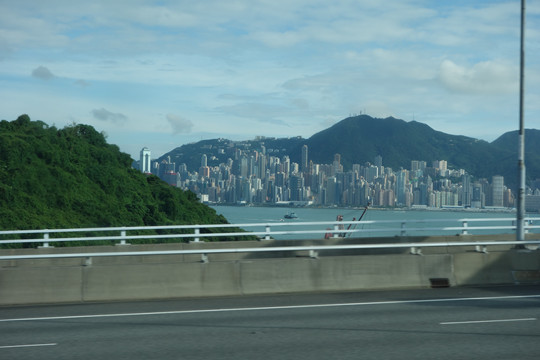 We are crossing the Tsing-Ma Bridge

We are now crossing the Tsing Ma Bridge, the longest suspension in the world for both automobiles and trains. Hong Kong was under British rule for 150 years. 500 years ago, Portugal occupied this territory. The age of marriage in Hong Kong is 32 for men and 29 for women. Thus far on our morning bus journey I haven't seen one single family dwelling, all apartments. Not a surprise.

It's lunchtime, 1:15 PM and we have just visited 'The Big Buddha'. We took a long gondola ride up to the 'Tian Tan Buddha" or Big Buddha and enjoyed a vegetarian lunch at a local restaurant. There are 268 steps to do the climb to get to the Buddha. We passed on making this climb. Jay just purchased 2 calligraphy pieces in a tea shop. 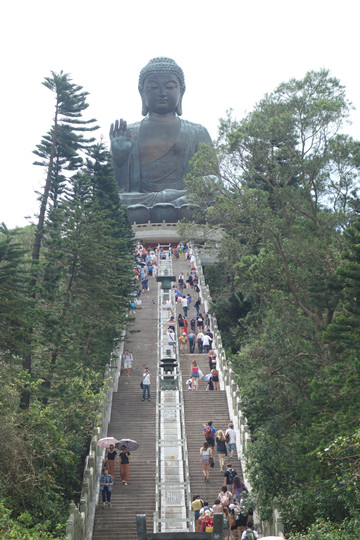 The 268 steps to reach the Big Buddha

We are now driving up to the Big Buddha area as our bus met us at the end of the gondola ride. It is a bit humid and the temperatures are in the high 80's.  We have just returned to the bus following our visit to the Big Buddha. Spectacular vistas.

We are now on our way to Tai-O, the village where the homes are on stilts in a harbor area. We then took a boat ride to a nearby bay where we hoped to see the 'white dolphins' of the South China Sea. No dolphins for us today. 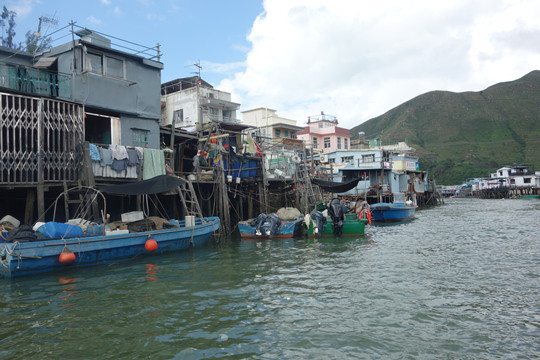 Tai-O Village, the village on stilts

Cantonese is more commonly spoken in both nearby Macau and Hong Kong rather than Mandarin which is the more common language spoken in the rest of China. 10 people recently died as a result of the typhoon that hit Macau. Both Hong Kong and Macau have autonomous local governments but are under the rule of China and Beijing.

I just had a nice chat with Nicola from Pisa, Italy. Great guy! We just spoke about Hong Kong being such a clean city. One rarely sees any litter.

Another ride on the gondola or cable car back to the area where our bus is parked and then back to our hotel. There are so many 30-40 story apartment buildings with many more under construction. We returned to our hotel at 5:30 PM. 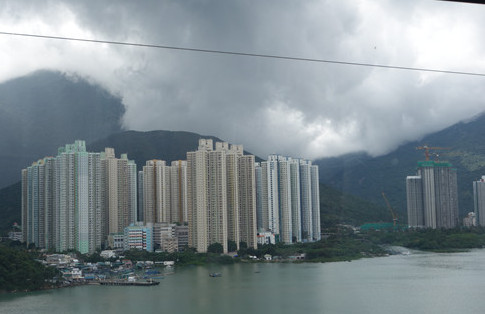 Apartments of Hong Kong as seen from the cable car

I exchanged some US dollars for Hong Kong Dollars at a currency exchange facility not far from our hotel. We then checked our schedule for tomorrow. We're going to enjoy a quiet lazy evening. To bed at 10:30 PM.

It's good to be in Hong Kong.