The 11th Annual Company Meeting Celebrating New Year  in West Mountain of Guiping comes in our expectation. This is a glorious tradition of our Visitourchina.com . The 10th Annual Meeting was hold  in Zhanjiang Guangdong last year  The content of every Annual Meeting are almost same, like delicious banquet, funny activities, work summary and lottery drawing etc. For me, the most charming point of this Annual Meeting is the place of holding it.

At 8:30, all staffs gathered at Jiatianxia Square in Guilin where was the place our company located. Then we took a coach started a wonderful trip to Guiping to celebrate our long-anticipated Annual Meeting. 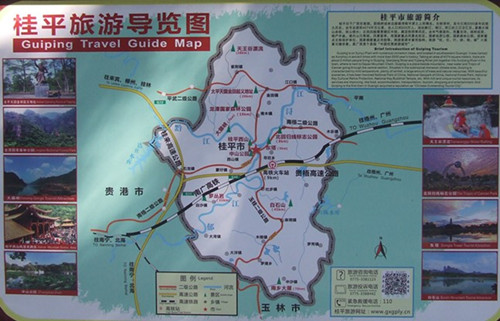 Guiping is a small city sits at the joint point of Xun river, Yu river and Qian river, with the population of 358 thousand people. From Guilin to Guiping the distance is about 340 Km, need almost 5 hours driving. If you like history, maybe you know about 2200 years ago, when the First Emperor conquered South-west China , he set up 3 administration areas on this land: Guilin, Nanhai and Xiang. But very few people knew the head government office of Guilin was located in Guiping---our destination of Annual Meeting! This was a very smart decision of First Emperor, boating upstream Yu river, the Qin Army could arrive Yunnan province and today’s Vietnam; boating upstream Qian river, Qin Army could arrive Guizhou province. If the boat downstream Xun river, Qin Army can reach South China Sea and central China(when boat arrives Wuzhou, upstream Gui river to central China ). So the Qin dynasty could strongly grip the control of this area by waterways. 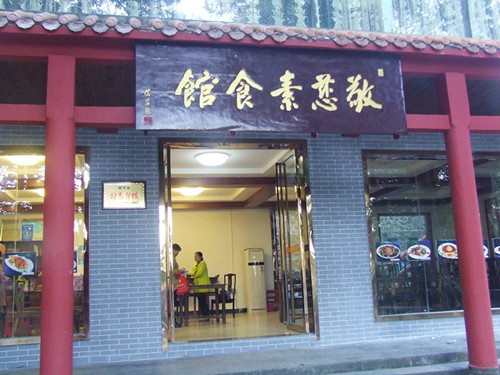 At 1:30pm our coach arrived West Mountain of Guiping city, we are so hungry that we eager to have a lunch. The vegetarian lunch was arranged in the restaurant nearby Xishi Nunnery. Vegetarian food is more and more popular in China now, because more and more people understand the health function of vegetarian food against high blood pressure, High blood lipid and coronary heart disease. The dishes of vegetarian served here not only boast good tastes but also look like meats( but they were really not meat), in this point I understood part of the wisdom of Buddhism. 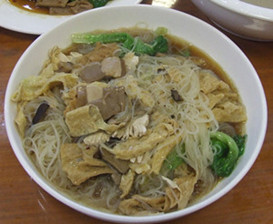 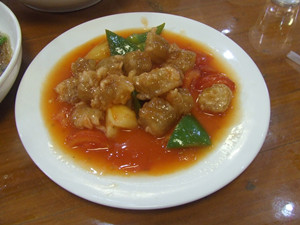 The Xishi Nunnery is famous in China, mostly because of a Buddhist nun, her name was called Si Kuanneng. Si Kuanneng’ folk name was called Long Liuwei, she was born in a rich family and had once received high level education in Beijing. She was so kind and mastered high achievement in Buddhism that her reputation spred across whole China, even Chairman Mao(1893-1976) wrote a letter to her to show his appreciation. In 1949. Si Kuanneng came to this Xishi Nunnery and acted as abbess here. Under her leadership all the Buddhist nuns cultivated lots of tea plantations, the tea picked from these plantations had excellent quality. Because of the income of tea, the Buddhist nuns live a good life and the Xishi Nunnery became bigger. 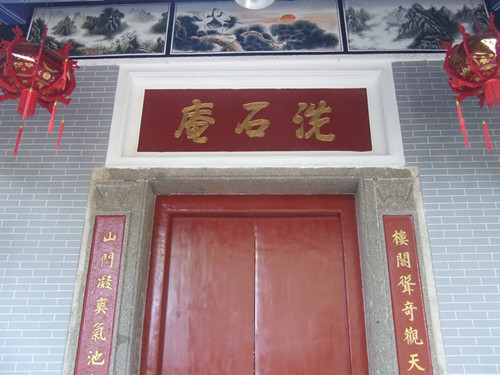 Walked up the hill from Xishi Nunnery about 8 minutes, there is a famous Spring, people call it “ Milk Spring”. it was said sometimes the water after rain could change color, looks like milk . The water in the normal days is very clean and suitable for boiling tea, I tried a cup of water from this well, the taste was really pure and a little bit of sweet. 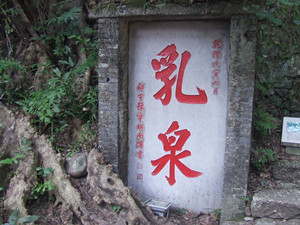 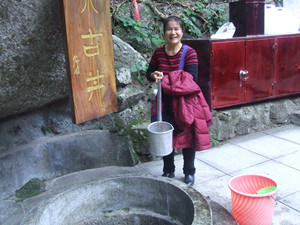 The Xishi Nunnery is also called Down Temple, the Up Temple is called Longhua Temple, about 20 minutes walking up the hill along a small trail with stone steps. This temple built in Song dynasty(960—1279) looks more Luxuriant comparing with Xishi Nunnery and is a site of Guangxi Buddhism Association. Inside the grand hall of temple, there are four Guardian Statues and eighteen Disciples of Buddha. The center Buddha is Sakyamuni, the founder of Buddhism in the main hall. 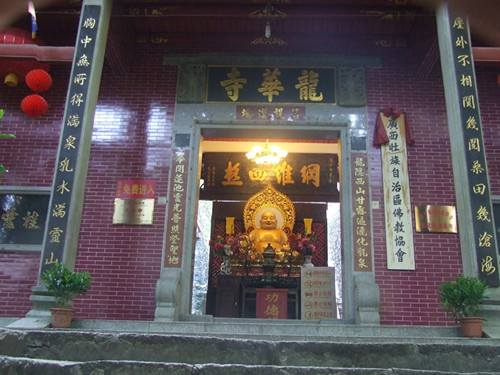 The forest in West Hill is verdant and dense, we took breath in and out deeply, let the fresh air wash our lungs polluted by city air. We kept climbing another 20 minutes, and arrived another temple “Guan Ying Rock”, many people burned incense here, begged this goddess’ mercy for a prosperous family. This temple was built by Master Mengchu, the abbot of Longhua Temple in the fourth year of Emperor Daoguang in Qing dynasty(1824), it is a perfect place overlooking three rivers flow away and worshiping the female Buddha (Guanying) 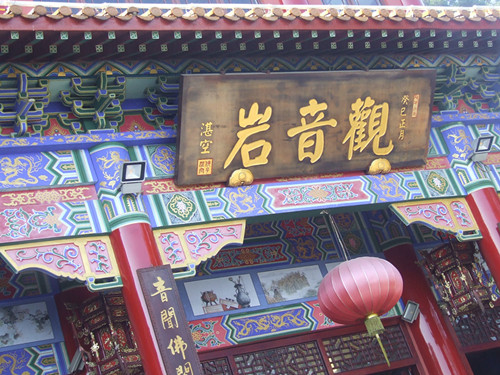 Finally all of us reached a highest pavilion called “Nine Dragon Pavilion”. We are so energetic and full of passion as same as the spirit of Visitourchina.com. At there we had a bird-view of the whole city of Guiping, the scenery was very nice.

By the way, there is a cable car available from the bottom to the top of the West Mountain, if you could not climb so high, 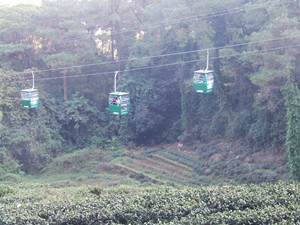 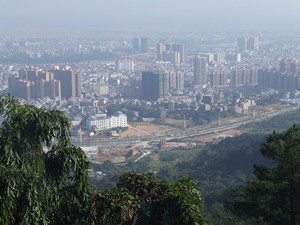 After checked in the hotel, we went to a restaurant where was the place holding our celebration of Annual Meeting. The first program was a speech made by our boss Huang, he praised all staffs of Visitourchina.com full of passion and responsibility for our customers in the past year and put forward new plan of new year. The new work plan in 2017 is heavy, but I thought the Buddha in West Hill will bless us, because many people said the Buddha in West Hill was very efficacious.  Some funny programs were done later, like trampling air balloon and wisdom test etc. The last program was lottery draw, I got second prize, our English department harvested best, almost every one got one prize. The was a good omen for next year. 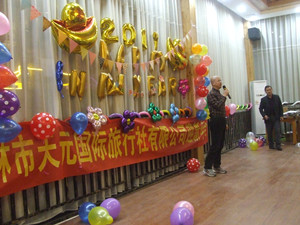 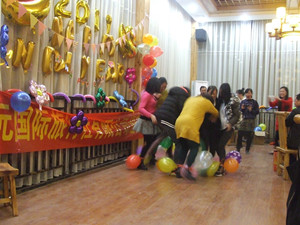 In the morning most staffs took coach to Longtan Forest park，where had lush forest, waterfall and wild monkeys. This park locates between the longitudes of 109°-110° and between north latitudes of 23°29′-23°34′, with the area of 38.7 square kilometers. The beautiful mountains is a branch range of Dayao mountain where is a state-level Nature Reserve. there are plenty of geological heritages, mainly of palm stone peak clusters and water erosion landform. In the mountains there are many canyons and waterfall worth playing. 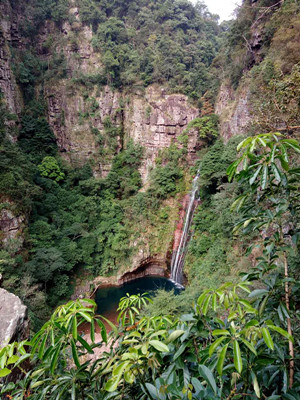 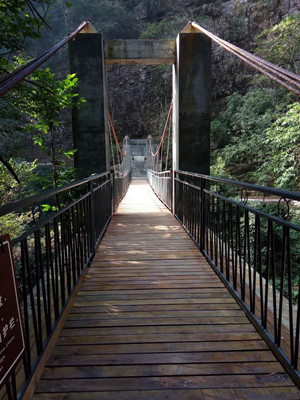 While a few people( including me) went another place, the old site of Jintian Uprising. Guiping was a small place in China, maybe few people in other province knew it, but everyone in China knew this history event- Taiping Heavenly Kingdom. So it was very worth to visit this Old Site of Jintian Uprising where was the origin of Taiping Heavenly Kingdom. In the Old Site of Jintian Uprising there was a high statue of Hong Xiuquan, who was the Heaven King of Taiping. Actually speaking, I did not like him and his theory of Taiping. But his uprising deadly shaked the stability of Qing dynasty, this is why I came here to take a memory photos. On January 11th, 1851, after years’ secretive organization, the God-worship association led by Hong Xiuquan launched an uprising in Rhino ridge ( know as BanYing) to fight against corruptive Qing dynasty, after 14 years fighting, Taiping Uprising was finally suppressed down by Qing Government. 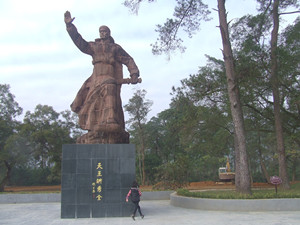 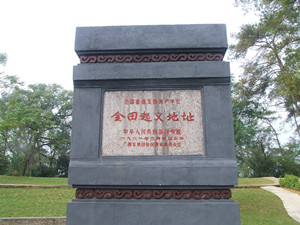 After lunch all staff went to a park called Tropic of Cancer where is a part of Guiping National Geopark, we learned lots of knowledge here. 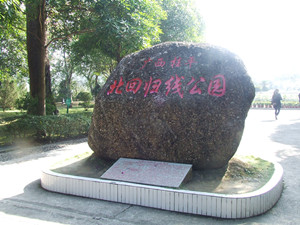 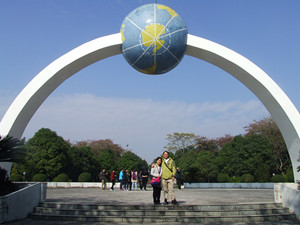 The two days' activites  of Annual meeting was so short, so happy, so memorable; we really look forward to gather together at next Annual Company Meeting.I also wish visitourchina.com grow up better and better and offer best service to all custermer from the world