September the 3rd, 2009, a special day in China, the Chinese Zhongyuan Festival comes. For Chinese people, there are two kinds of calendars we are using among centuries, the solar calendar and the lunar one, the solar one is the same date as the one we usually talk about in our daily lives while the lunar one was commonly used in the old China but is still being used by many people to record their birthdays, the date and it is even used to judge the lucky level on each day and it is used to keep the agricultural seasons for the farmers. Today is the July 15 of the lunar calendar, the traditional Chinese festival today is also called the Hungry Ghost. I have witnessed the celebration activities in Guilin. 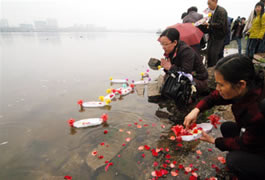 Our company is located beside the Guilin International Conference and Exhibition Center, outside which is where the largest square-Jia tian xia square located in. People used to hold festival celebration on the square and the square is enjoyed very much by the citizens, especially for the old and the kids. Today, it has become the happy ocean for Guilin citizens.
The festival was observed by Taoists, and the Ullambana Festival celebrated by Buddhists as well. It is a day to honor the departed spirits of ancestors as well as a festival to pray for safety and show filial piety to parents.
In the evening, all along the streets and avenues are full of people who are setting off firecrackers and burning ghost money to drive away the ghost and to honor the ancestors’ spirits. I can still remember when I was a child, when the Zhongyuan festival comes; mom and dad were scaring me in telling me that in the 15th of the July, the ghosts will come up from the river to the bank. And never go to swim in the river on that day, or you will dragged away by those spirits, how I was afraid of that in that moment! 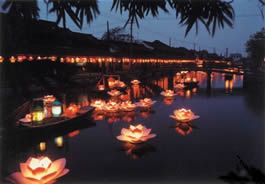 Lighting up the lantern is another customer in this festival. The water lantern, also called "lotus lantern", is usually made by pasting paper into lotus shape, and then a lamp or candle is put onto the pedestal. On the night of the Zhongyuan Festival, the lanterns will be released to rivers or lakes to drift with the flow. It is amazing to see varies kinds of people gathering along the riverside or lakeside, release the lantern away, every lantern contains a wish for the memory of the passed away family, the eager hope to obtain the love between lovers and the prays for good heath of the children. The lantern flows away with the current, the silence says it all.
Besides the lotus lantern, there is another lantern called Sky lanterns (Kongming lantern), they are constructed from oiled rice paper on a bamboo frame, and contain a small candle or fuel cell composed of a waxy flammable material. When lit, the flame heats the air inside the lantern, thus lowering its density causing the lantern to rise into the air. The sky lantern is only airborne for as long as the flame stays alight, after which the lantern floats back to the ground. Wishes are also fly away with the lanterns in the wind. In the beautiful night, in everybody's heart. 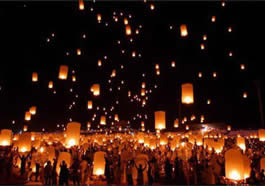