The most mysterious nine lakes in China’s Tibet

Between mountains and rivers, Tibet has long been considered as the closest place to heaven. And all kinds of lakes there also attract much attention for amazing sightseeing and stories hiding behind.
1. Sacred Lake Nam Co in the arms of Tibet mountains 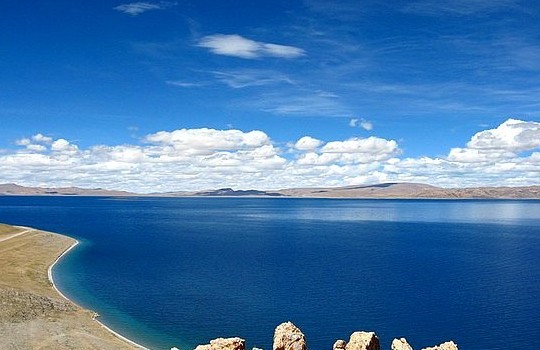 It is like a female soldier defending her god Gnyan-chen-thang-lha.
Nam Co means ‘Lake in heaven’. It is about 240 kilometers far from Lhasa. With 4718 meters’ elevation and a length of 70 kilometers, a width of 30 kilometers, it is the biggest salt water lake in Tibet, and the lake in highest elevation of China. In the south of the lake, stands grand Mount Nianqingtangla, and in the north and west, lies magnificent highland hill. Broad lake shore and fertile grassland breed the people and culture.
2. Basum Lake 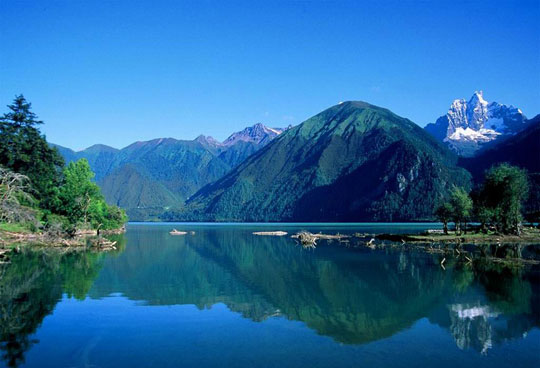 Lake Basum has another name ‘Cuogao Lake’, is the sacred lake of Ning-ma sect in Tibetan Buddhism, and also one of the biggest barrier lake in east Tibet. ‘The lake is so limpid that the lake bottom can be seen and its surrounding snow-covered mountains are mirrored in it. Sandpipers and white cranes swim in it as if the lake is a Shangri-La’ – description by a visitor. It is about 400 km away from Lhasa City.
3. Tangra Yumco Lake in the sacred mountain Daguo
With an area of 1400 sq.km, the lake was found in the world-known depopulated zone. Shuanghu, Wenbu area covers moer than 200,000 sq.km but has only one person in every 6 sq.km. There is a famous mountain named Daguo Sacred Mountain in Tibet, and it settled itself with the Tangra Yumco. It is occasionally mentioned in the legend or fairy tales, thus it is known only to some people.
4. Lake Raksas Tal – the lake of demon
Tibet people have tolerance and mercy in heart. They will not forget to pray beside the demon lake Raksas Tal when worshiping the sacred Lake Manasarovar. The demon lake and sacred lake are very close to each other with their water connected. But nobody knows why their water taste completely different. Their surfaces present the same scene – quiet but broad, they are protecting the place and the people, for thousands of years.
5. The sacred lake – Manasarovar 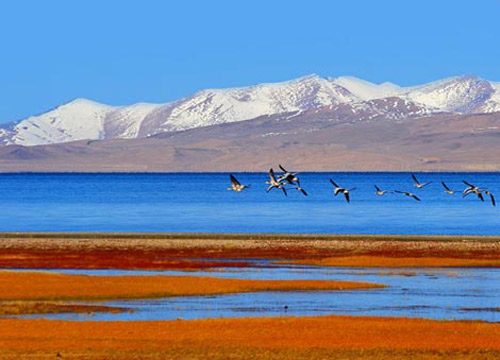 With an elevation of around 4500m, and 77m in the deepest area, it is the oldest and most sacred place in Buddhism and Hinduism. Manasarovar means invincible in Tibet language, just like the Sun King. In a place named Ali which is 2000 kilometers away from Lhasa and has long been considered by Tibet people as the edge of the sky, Lake Manasarovar exists as the origin of four big rivers. Buddhists believe that Manasarovar it the most holy and pure lake, and the gifts given by the Buddha. They also believe its water can remove trouble and guilt.
6. Lake Lamunacuo – Skull of the Pelden Lhamo (goddess of auspicious)
It is also called Goddess Lake. It looks exactly like a skull if overlooking from the peak of the snow mountains. According to the legend, the sacred lake is able to present the future of all worshipping persons. Every reincarnated soul boy of Dalai Lama in Tibet is supposed to be found under the indication of the sacred lake, and Dalai Lama of all generations must go to worship the sacred lake as a ceremony.
7. Yamdrok Lake – Scattering kllaite eardrops of the goddess
It is well known as the most beautiful water in the world. It literally means green jade lake in the pasture. But it is considered as the scattering eardrops of the goddess because you cannot see its full appearance in any angle. It stretches over 130 kilometers in the mountains. Only when you are in the sky or through maps that will you find it looking like eardrop engraved in the top of the mountain.
8. Selincuo – the lake where evil hides in 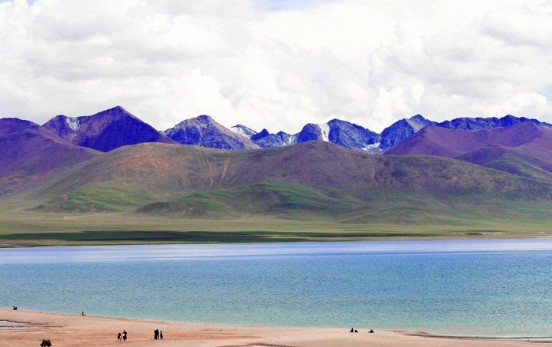 Selin is a monster in the legend of Tibet history, but surrendered by Padmasambhava, a great Indian guru, and was sentenced to stay in the lake forever confessing his sins.
9. The famous Lake Bangongcuo – a lake across both China and Kashmir
The last one is a famous big lake Bangongcuo. Although it has no religion connection, it is widely known for numerous biological species.
- Xavier (VisitOurChina)
Tags: Tibet Sacred Lakes Nam Co Yamdrok Religion Legend