Your Position: Home VOC's Travel BLOGCulturesZhiQing and the campaign of up to the mountain & down to the countryside

This campaign was the late part of culture revolution (1966-1976), it started from two year of 1969, the third year of culture revolution, red guards had done the mission what Chairman Mao wanted. But the situation was out of control, red guards were still immersed in the passion of struggle. They wanted to carry out one after another great mission. The other crises were many factories and schools were closed. Graduated students were accumulated from three years. So send them to the countryside to share farmers' food, to let farmers to watch them, was not an idealistic way. But it can solve the problem at the moment. Then Chairman Mao raised this campaign.
Chairman Mao’s call excited young people to go to another battle field. "It's necessary for the educated youth (ZhiQing) to go the countryside and they should be welcomed and accepted by village comrades. Since it is a place of expanse and can do a lot there."

From 1969 to 1976, for almost 8 years, there were total 20,000,000 educated youth or "ZhiQing" were sent to the countryside, at the same time millions of family involved in this campaign.
Some ZhiQing only stayed in the countryside for short time two years, even one year, then transferred back to the city, worked in the factories or join to the army. Anyway to leave this expanse place whose family were from privilege or was some "guan xi"—relationship. For most of us from grassroots, we had to stay with great patience. My sister stayed for three years, my brother four years, for me, five years.
Five years seems a short time in your life, but it was too long for me stayed in the countryside. Simple life, poor food and hard work cycled day and day, year and year. 20 years after I left countryside I still had dreams of village, sometimes I wake up in the midnight, I don’t know where I am. A lot of time I just laid on my bed in the old house, watching wood beams cross the ceiling. There was another world, a rope around the main beam, some old villagers said somebody hang up long ago, a lot of rats attractive some snakes came to the house, they twined round the pillar. What I like was to see pomelo trees through a big whole of the wall, I watch the trees leaf sprout to fall and birds played up on the branches, it’s very quiet. 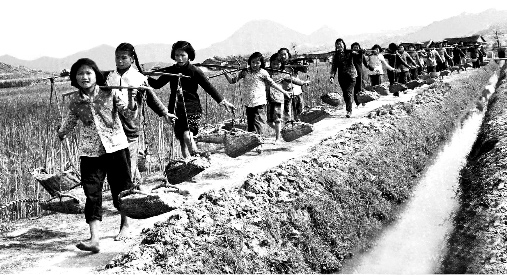 The campaign of ZhiQing could not continue till 1978, because ZhiQing waked up, and they could not keep silence any more. Riots started from Yunnan first, especially for those military farms, then other provinces. It shocked centre government. Millions of young people’s future should not be neglected.
Finally, the late Chairman Deng Xiaoping came to close the curtain of this campaign and commended it. "There are three dissatisfactory the education youth are not satisfied, as well as farmers and parents of educated youth, spend billions of government’s money."

After 40 years when we closed to 60, looking back for this part of history, we care those experiences. It became spirit treasures of our life time. At the same time we were luckier to stay in the countryside longer when we could have more freedom of talk than that in the city, because farmers in the countryside were less affected of ideology. We proud of we have experience of ZhiQing and we have witnessed that part of history.