Your Position: Home VOC's Travel BLOGCulturesThe bamboo trades up and down in Guilin

People in Guilin used a lot of bamboo products in old time. Housewife carried bamboo for shopping in the market everyday, children played bamboo toys in the street, like water gun, catapult and bow. Also most furniture was made of bamboo for the family. I still remember parents moved bamboo bed to the outside in hot summer night. How nice, we sleep on the cool bamboo bed to watch the sky and count stars. Even the pillow and mattress were made of bamboo. You know, summer is hot and long in Guilin, because it’s located in the subtropical region. People used bamboo furniture to make you cool off in summer.
Many bamboos were made into screens to sell. It was very wildly used for roof, ceiling and for spacing a room. In old time, many boats on the Li River were some people’s homes. The body of that kind of boat was made of firewood or camphorwood, but the top of it was covered with bamboo. Firewood could last for a long time in water, and bamboo screen covered on the top can keep heat and rainwater away, and easy to repair. On the side of the boat, an extra piece of bamboo screen was put there. It was a moved toilet, people rolled up the screen to make it a simple washroom. The whole screen just sags down your feet, directly to Li River. Don’t worry something about pollution; actually the river was much clearer than the present one. Bamboo screen also played other roles. During the river transportation, when the boat was whirled by a torrent, people will drop the bamboo screens to the river, the eddy will disappear immediately, and then boat could pass smoothly. I heard this story from an old man who spends most of his lifetime on boat in Li River.

Bamboo plants grow in the area of Haiyang Mountain, which is in the north and 200 km away from Guilin. It is the biggest soil mountain in this area of karst formation. It’s different from limestone formation with lots of holes, caves and underground river waters leaked away. A soil mountain can keep water and store water. Especially people grow trees and bamboos on it. There are many streams from this mountain, which are the source of Li River. Thanks for god to create this good place for us to live.
Transporting bamboos from mountains to the city was a problem, and Li River was the only choice. But Li River was shallow in most time of the year. People had to wait for the rainy season. Every year Li River rises and is overflowing in spring. Farmers started to cut bamboos when the rainy season came. They cut bamboo trees and slip them down to the river. 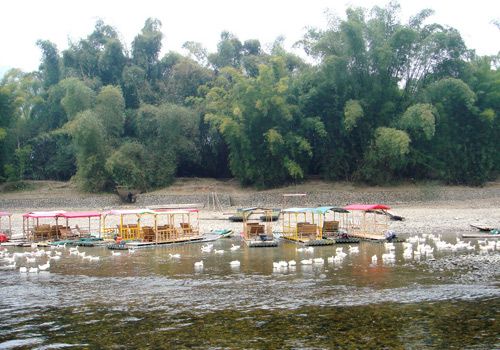 To pack bamboos into rafts and float them to Guilin along Li River, it was a professional job for raftman. Raftmen were really hard-working. They usually made a small hut on the bamboo boat and live on water, cook on the boat for days. Raftman always stands on the head of a raft, holds a long bamboo hole, and leads more than 10 rafts through one after another swift current.
The centre of bamboo trade market was near Zhong Zheng Bridge (now the Liberation Bridge) in Guilin. It was the place of collecting and distributing as well. It was a busy place. Almost a hundred of shops stood along the bank of Li River (the bank of Li River was flat 50 years ago). People were busy counting how many pieces and dividing them into different classes. The payment could be paper money, silver coin and even rice. Most people prefer silver coin and rice to paper money, because silver could keep its value.
As soon as those raftmen got money, there were many restaurants, teahouses around the market. But there was a place, actually a short street on the east side of Li River, which was named “Chou Shui Tan” (Smelly Pool) and a more attractive place. It was full of whores. The price could be from 50 cents to 10 dollars. 50 cents you pay, the service was to eat watermelon seeds with a woman, and 10 dollars could buy a dinner with drinks, with a woman. The Flower Boat on Li River sounds more romantic. You could spend a beautiful night privately with a girl. When I heard this story from a local old man, he still talked in great interest, and proud to say that he was an acquaintance of that place. 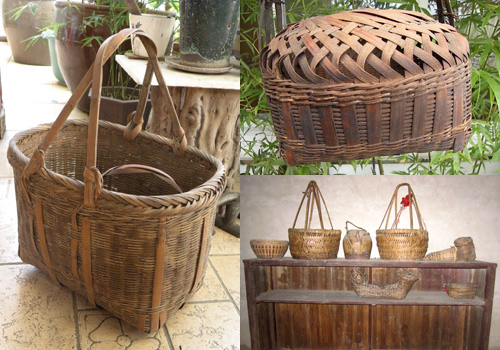 Ximen (West Gate) was the place for many bamboo factories. It’s a Muslim district. There were many very skillful workmen of the bamboo products, such as baskets, chopsticks and furniture. The workmanship was taught and passed down from generation to generation until 40 or 50 years ago when people began to use more and more plastic products. Now bamboo products are almost disappeared. Only you can buy some traditional bamboo products in some remote countryside markets. Sometimes I drove my jeep to a countryside market, bought several bamboo baskets and brought them home.
It’s so beautiful. Especially I like the smell of green, the smell of nature. It reminds us some old stories.
--- VisitOurChina
Tags: Guilin bamboos bamboo products