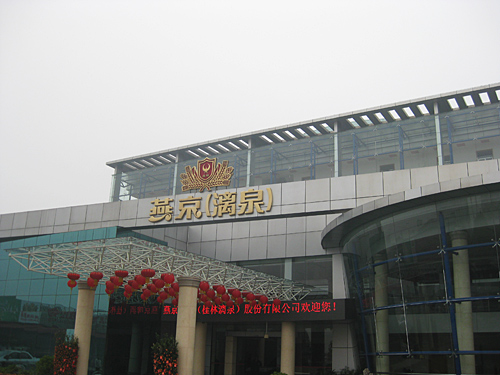 Invited by Yanjing Beer (Guilin Liquan) Co., Ltd, we got a chance to visit this national-wide renowned beer company on February 23rd and team up with the company to plan an entirely new tour in Guilin: Guilin Liquan Natural Beer Tour.
The Yanjing Beer (Guilin Liquan) Co., Ltd is located in the south of Guilin with very convenient traffic. The predecessor of the company is Guilin Liquan Co., Ltd, which is founded in 1985 and merged into the Beijing Yanjing Beer Group in July of 2002. Liquan beer produced by the company accounts for nearly 80% of the beer market share in Guangxi and is much sought after in South China.
The company is about 20 minutes' drive from our company. When we arrived at the gate of the company, I found that the outward appearance of the company is quite common and strangers may not believe that it is indeed a famous company brewing the great-tasting Liquan beer.
Our guide is a girl from the company. We learned from her that the company covers an area of 334,000 square kilometers and our visit would consist of five sections: the wheat-saccharifying workshop, the fermentation region, the bottling & packing workshop, the Beer Culture Exhibition Hall, and the Guest Rest Area. 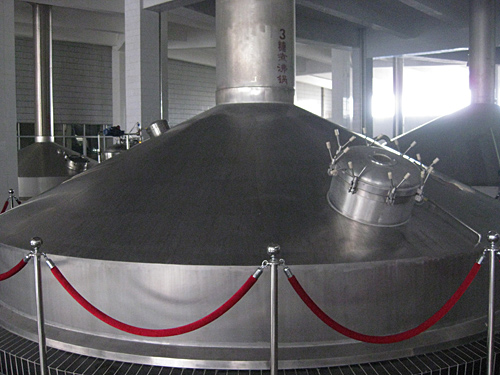 Our first stop was the saccharifying workshop. It is a place full of some smell of ferment which diffuses from the several big "headstanded" funnel-like aluminium machines. There is a round judas window on each of the machines, from which we could clearly see that wheat was stirring inside with water or something like that. We were introduced that these machines were proceeding the first step of beer brewing. In the middle of the workshop there is a testing table where workers detect the alcoholic strength of the production; and on one side of the workshop is the supervisory control room, in which workers supervise the production and the machines. 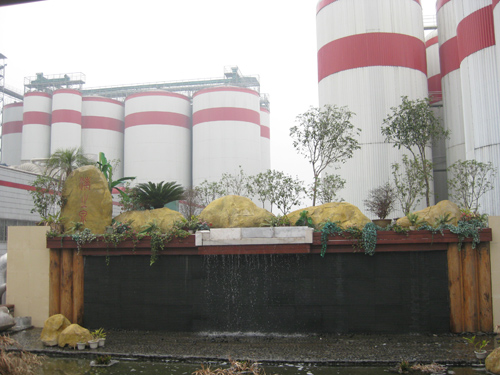 The next stop – the fermentation region – is connected with the saccharifying workshop by a passage. This is an outdoor site on both of which stand many big boilers. The product from the saccharifying workshop is transferred into these big boilers for fermentation – that will last for 18 days. According to the guide, we knew that some of the equipments and technology are imported from home of beer: Germany. The guide also told us that there are 132 beer boilers, with a total capacity of 43,200 m³, that means the company can brew 800,000 tons of Liquan beer per year, which equals 1.36 billion bottles. Now that it can produce so much beer annually, so is there any waste from the production? And how does the company deal with that? From the Chinese-written mark on one of the beer boilers we found the answer: To protect the environment, our company has made heavy investment in importing recovery installations to recycle the discarded carbon dioxide and yeast powder. And what surprises me is that the distilled water and distilled grains are tactfully re-used and become another two new products: purified water for drinking and forage! 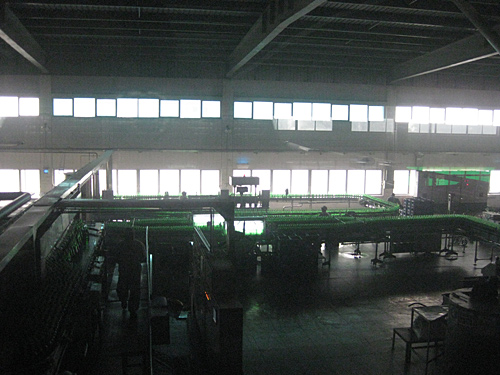 With gasp in admiration for such wise idea, we moved forward to the last section of beer production. The plant is quite large with 9 mechanized production lines, but there are just a few workers there supervising the lines, beer is bottled and packed in order by the machines. The lines move slowly, bottling and packing 3000-6000 bottles of beer per hours. The bottles on the production lines make jingle sound and that make the quiet plant an inornate "music factory". For me who entered a beer factory for the first time, the mechanization really aroused my interest. 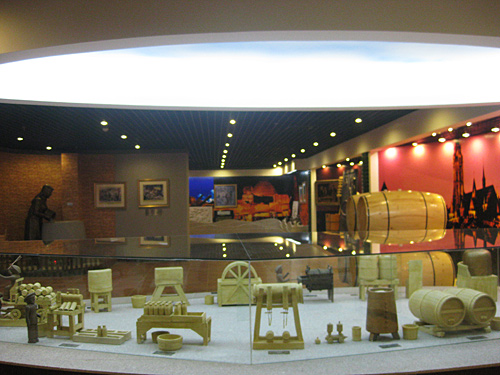 The fourth stop is the company's Beer Culture Exhibition Hall that has been extended from 200 ㎡ to 2000 ㎡ in recent years. Vividly distinguishing from the previous three stops, this part is meticulously decorated like a museum with soft light, murals, sculpture, Chinese calligraphies, mini model of the factory site, old-style office facilities and beer brewing equipments, all of which are relevant to beer, from the development of the company to the history of the world beer, including some introduction to the history of German beer. In the Chinese Beer Culture Hall, more information and articles about the company's enterprise culture and the Chinese beer history are showed. 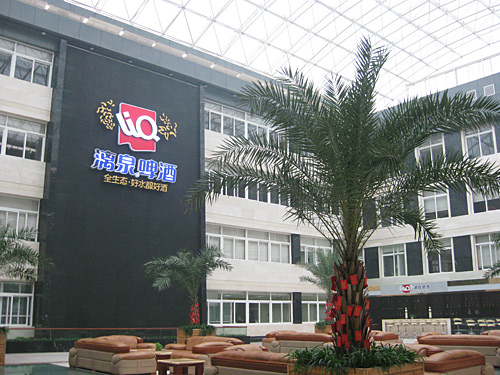 Afterwards, we came to the Guest Rest Area on the first floor. This glass-walled room is designed for visitors to have a rest and have a try of their beer, there are some brochures of the company for visitors to read. At the end of the visit, the guide kindly invited us to their staff leisure area to have a taste of their latest product – Liquan Hong Zha (Liquan Red Beer). It is a kind of beer on draft specially brewed for lady, with an alcoholicity of only 1%. The beer looks like red wine and tastes like the mixture of hydromel and red wine, lightly sweet and mellow. All of us like it very much, but it is a pity that this new product has not been put into market so far.
This tour took about 1 hour, providing us with both the whole process of beer production and the tasty Guilin Liquan beer. From the guide we learn that beers brewed in different regions have different mouthfeel more or less, it is considered that beer brewed in Guilin tastes better partly because of the good-quality water from the unpolluted Li River of Guilin, and that's how the name of "Liquan" came: Li – Li River, quan – stream. For those who are interested in beer production or those who work in this field, VisitOurChina is always very pleased to help them to visit or inspect this famous Chinese beer company and enjoy the Liquan beer offered by the company free of charge.
--- By Cindy (VisitOurChina)
Tags: Liquan Beer Li River Guilin Guilin Tours