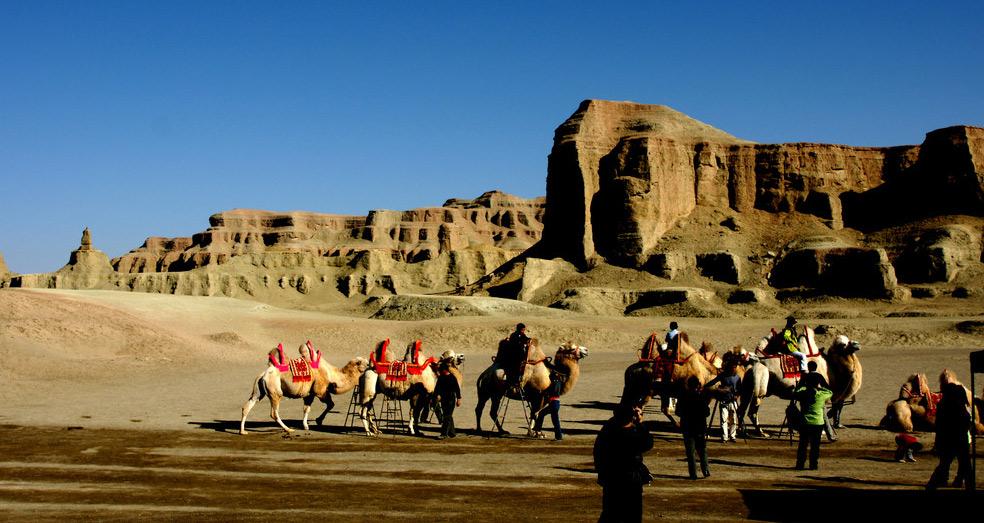 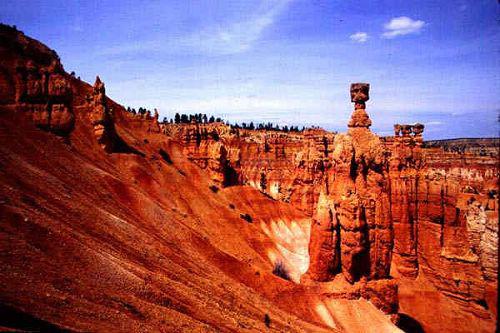 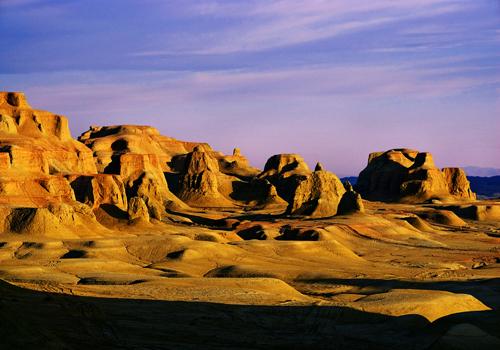 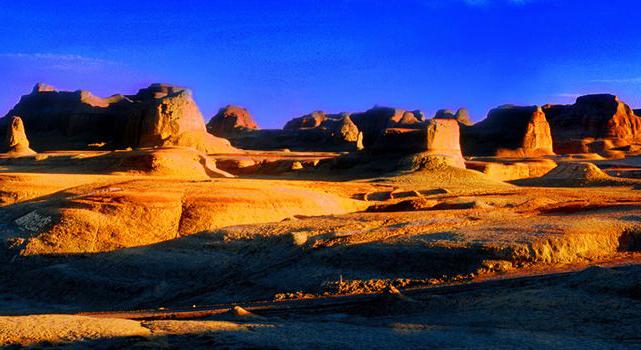 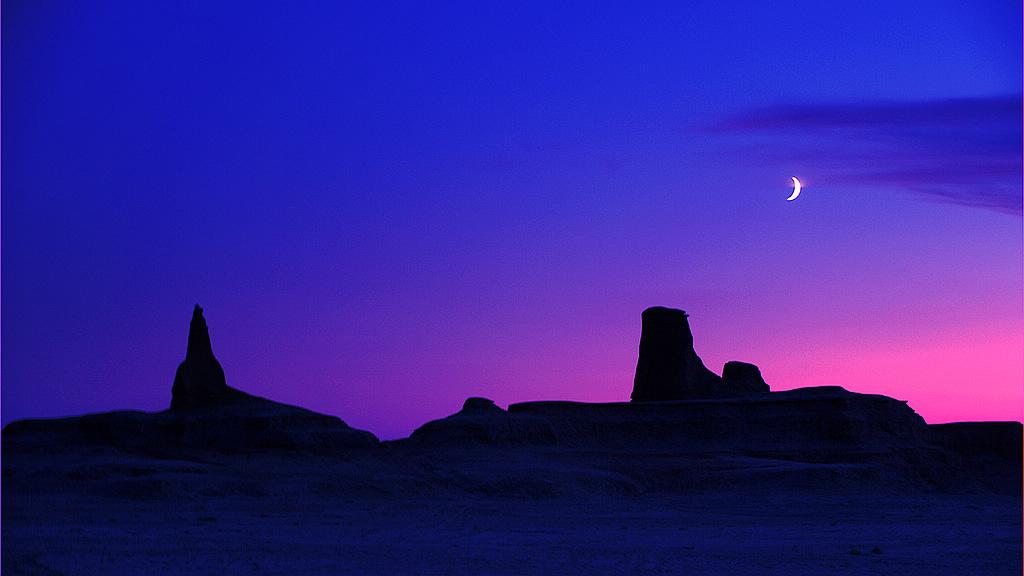 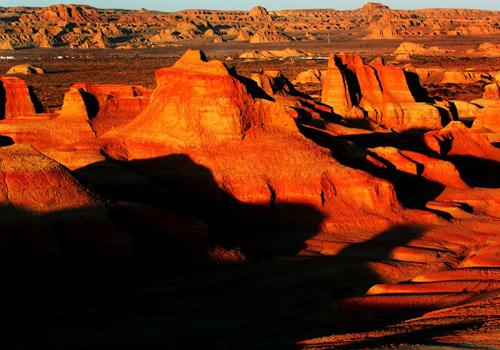 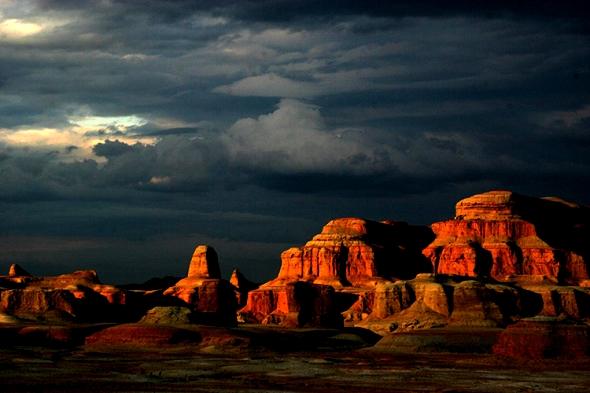 Location: About 100 kilometers to Karamay, the Demon City is in Wuerhe mining site in the lower reaches of Jiamu River, northwest of the Junggar Basin, Xinjiang.
Opening time: All day long.
Admission: Free.

On the endless Gobi Desert, there suddenly appear countless criss-crossing earth mounds in different heights, like ancient castles. It is said that screaming and shouting sounds can be heard at night when wild wind passing through the earth mounds with sands and stones. In fact, the Demon City is inside the typical Yadan Landform (a wind erosion physiognomy formed in dry areas) Area, which was formed because of dry climate and strong wind.

As early as more than 100 million years ago (in cretaceous period), there was no Demon City but a huge fresh water lake where there lived thick plants and ancient animals such as Wuerhe Stegosaurus, Plesiosaurus, Dinosaur and Junggar Pterosaur-a paradise for the water creatures. At that time, extensive lake facies stratums were formed. Then the lake gradually rose to be become the land and the dinosaurs, fossils. Finally, typical Yadan Landform was formed in Demon City. 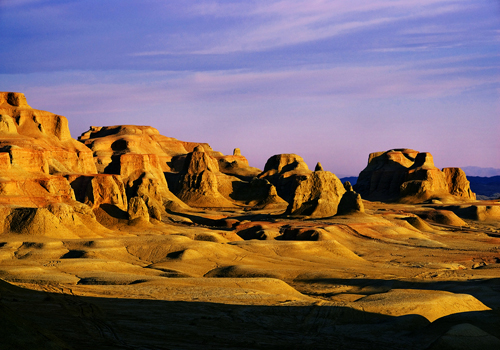 The Wind City looks like a huge castle in Medieval Europe period from far. The castles are in different sizes and heights, scattered in disorder. Ravines in various depths were formed and the uncovered stones were carved into different shapes by strong wind: shapes of demons with bared teeth; some looks like ancient castles with high steps; some looks like pavilions with eaves; some looks like magnificent palaces standing proudly… Multicolored (red, blue, white, orange) stones are scattered in the rolling hills, seeming like the lost pearls of the faerie, adding mystery to the Demon City.

However, you can feel terror and fear only when you arrive there. You will be surrounded by lots of peculiar-looking earth mounds, the highest one reaching more than 10 meters. The sidewall of the earth mound rises deeply, from which you can see the deposited beddings. There is no grass but only earths in the surrounding. And you will feel secluded from the world in the real sense. Just imagine the windy or rainy days with sound thunders here, you may be tremble with fear. 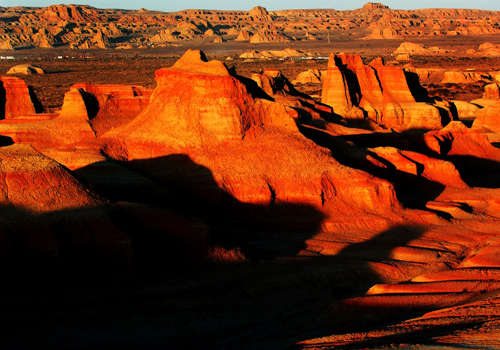 The Demon City / Windy City is located in the tuyere and fierce gale usually blow from April to August. When the fierce wind comes, the Demon City will become a dark world with flying sands and stones, and strange shadows. The wind circles and whistles in the Windy city, making screaming sounds like the crying of the monsters and wolfs, quite unheimlich. If it is in the evening with dim moonlight, the Demon City turns to be more dreadful, a seemingly Horrible World!