Who and why built the Great Wall? 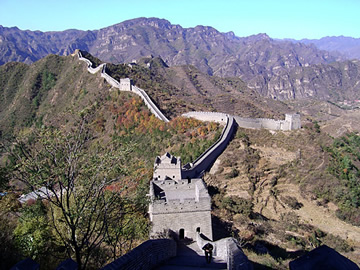 Actually, China is not the only country in history that built wall along its boundary. Athens, the Roman Empire, Denmark and Korea all did so at certain time in the past. The Hadrian's Wall in northern England, built "to separate the Romans from the barbarians", extended 117 kilometres from Wallsend-on-Tyne in the east to Bowness-on-Solway in the west. All the walls were built for the purpose of military defence, and the Great Wall of China was no exception.

Yet the Great Wall is unique. It was first built in the 7th century B.C. when China was still divided into many small states. After the unification of China in 221 B.C., the first emperor of Qin Dynasty (you must have heard of his teracotta army) linked the walls of the three states in the north and formed the first "Wan Li Chang Cheng" (ten thousand li Great Wall, li is a Chinese length unit, 2 li = 1 km). Since then, the Great Wall was rebuilt, modified or extended throughout Chinese history for over 2,000 years. Most of the Great Wall we see today was built in the Ming Dynasty (1368-1644). In some areas, two walls built in two different dynasties can be seen running side by side. For a more detailed history of China and the Great Wall, please click here.

Based on the technology available at different dynasties, the Great Wall was usually built with local materials, mostly earth and stones. Natural terrain such as mountain ridges was often taken advantage of to form part of the wall. West Han Dynasty (206 B.C. - 25 A.D.), for example, used sand and crushed stones filled with layers of reeds or tamarisk twigs to build the wall in grasslands and desert areas that are subject to strong wind erosion.