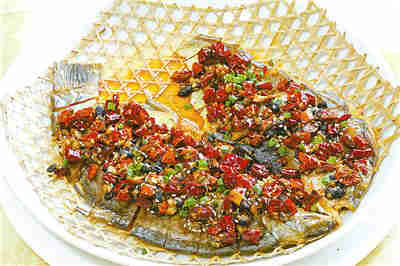 -Wanshan Pork Leg (万三蹄)Wanshan Pork Leg is a must-have dish for Shen Family entertaining guests. It is the entrée on the table of festivals and wedding banquets. Well-marbled pork rear leg is simmered in a clay pot through a day and night with prepared seasonings. With shimmering red skin, tangy aroma, the pork leg is fat and crispy and not greasy, the taste is lingering.

-Three-flavor Rice Dumpling (三味汤圆)With an amazingly flaky and crystal crust stuffed with various fillings and flavorings, the succulent rice dumpling is a delicacy featuring both the taste of steamed meat dumpling and wonton.

-Boiled Weever and Water Shield in Broth (鲈鱼莼菜羹)Weevers usually have two or four gills. Zhouzhuang is rich in weevers of two gills which are tender and have no barbs. They are best savored when braised in brown sauce or boiled with water shields. Weever and Water Shield in Soup is hailed as three most famous dishes in regions south of Yangtze River.

-Fried Clams (蚬肉炒菜)Fried White Clams is a simple dish that is popular among locals. White clams come into season in the fourth lunar month of the year.

-Fried Whitebait with Scrambled Eggs (银鱼炒蛋)Whitebait is produced in freshwater. It is in season around Tomb-sweeping Day. It has a long body and white skin with tender meat. Fried Whitebait with scrambled eggs is a well-known home cooking in and around Zhouzhuang.

-Steamed Green Turtle (清蒸甲鱼)Green turtle is rich in high protein and multiplex vitamins. It is a healthy and anti-cancer food. Flavors and nutrition of the food is maximally preserved as it is steamed in clear soup. It is also delicious when boiled with chicken, which is called "Bawang Bieji".

-Sweet Green Rice Ball (青团)Sweet green rice ball is a typical Jiangnan food. It is agreeably sweet and is the favorite cake of locals.

-Chengyao Cake (Supporting Waist Cake, 撑腰糕)It is a custom that Zhouzhuang people make Chengyao Cake on the second day of second lunar month. This cake is a mixture of glutinous rice, brown sugar, nutlet, pine nut and red dates. Steamed in bamboo steamer, it is fluffy and tasty. According to local custom, peasants will be capable of doing farm work after eating Chengyao Cake. It is believed that Chengyao Cake can prevent back pain.