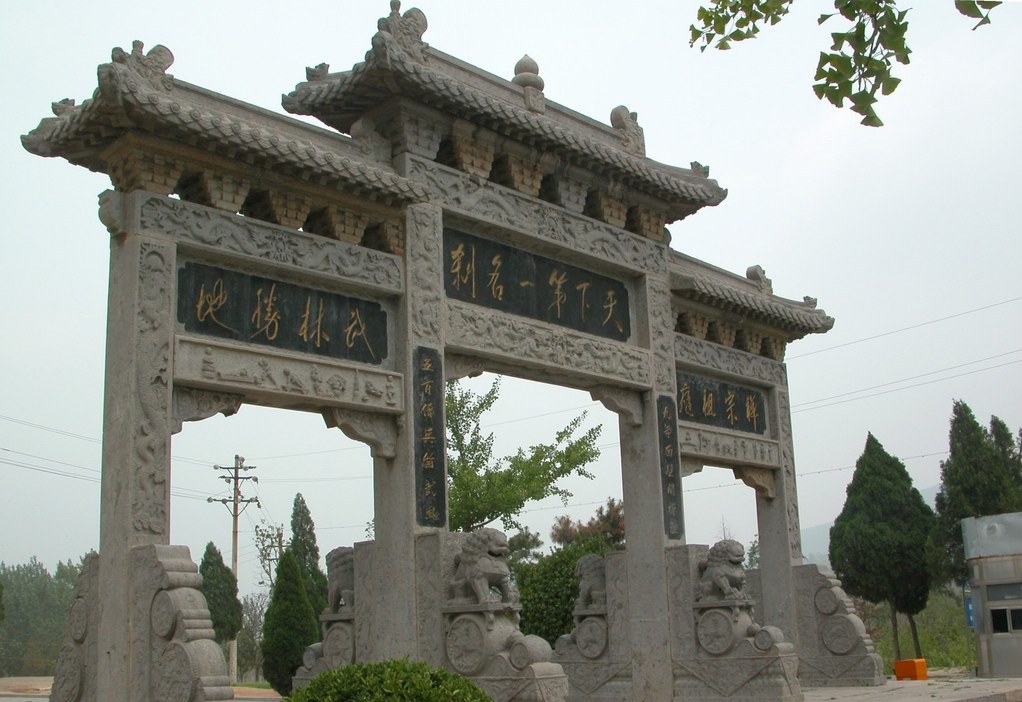 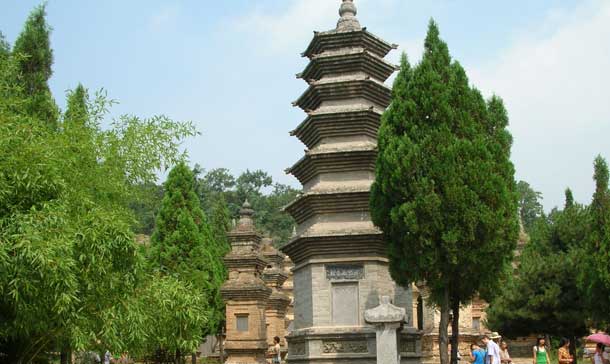 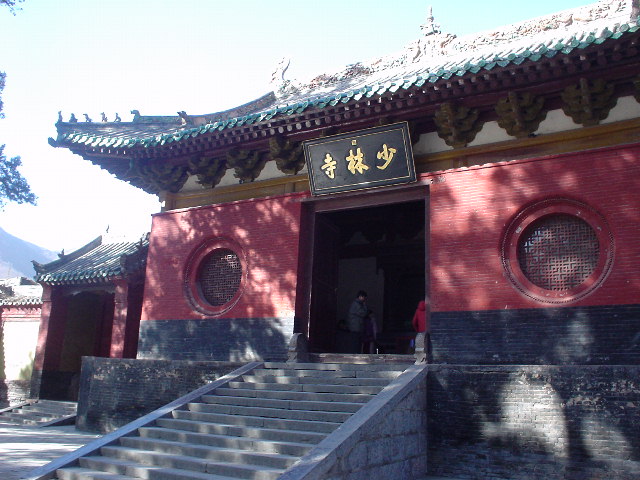 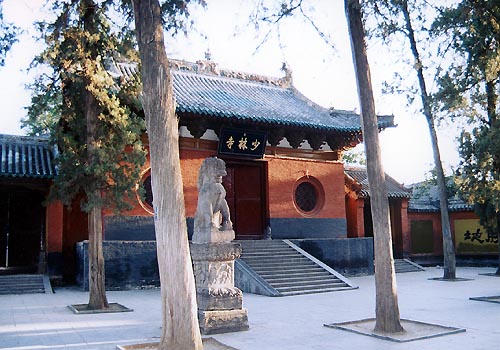 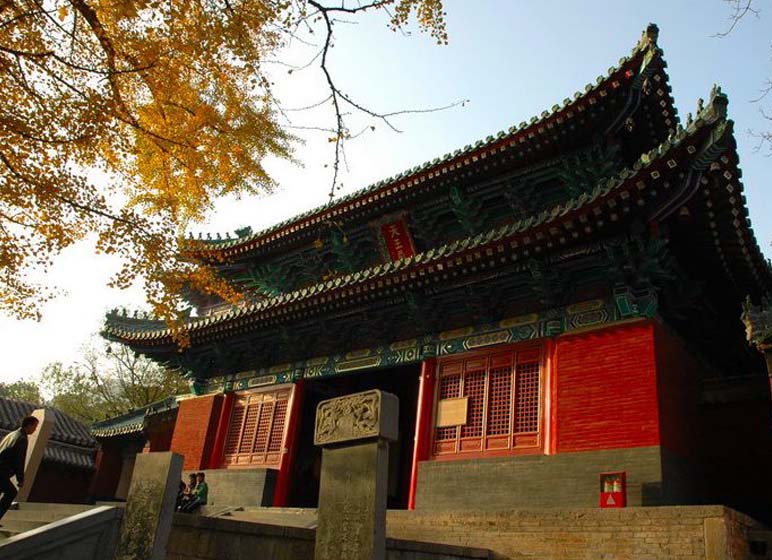 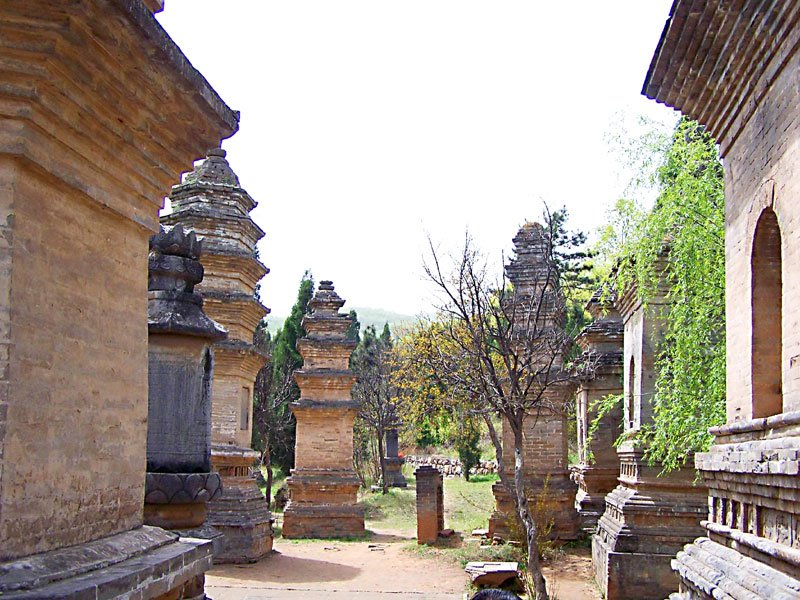 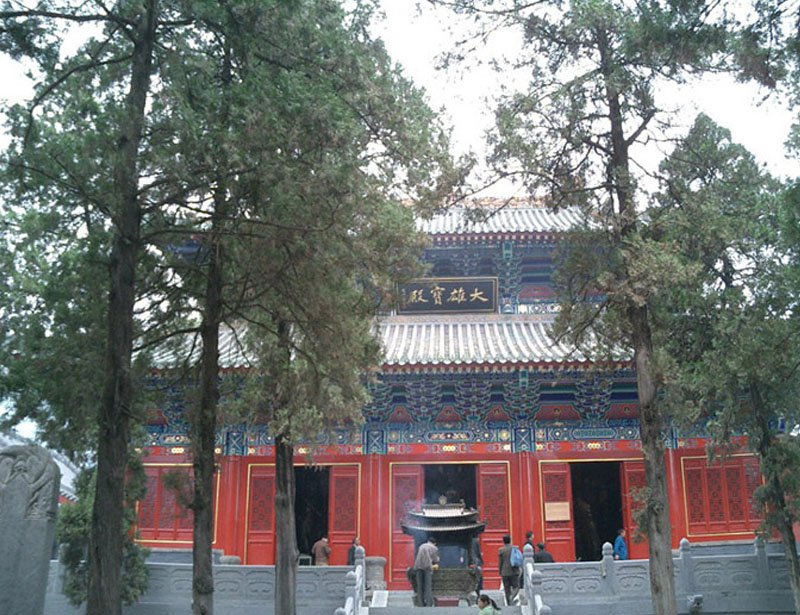 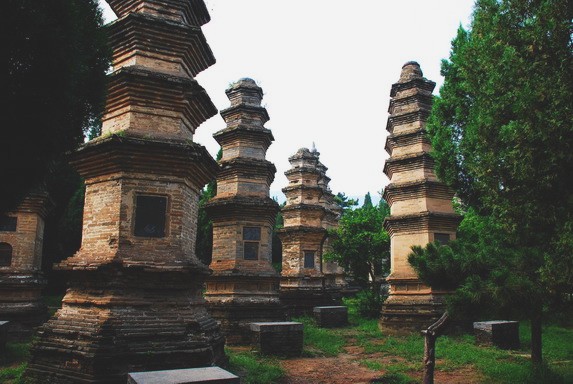 Chinese name: 少林寺 (Shaolin Si)
Location: at the southern foot of Mount Song, 13 km northwest of Dengfeng City, Zhengzhou City, Henan Province.
Ticket: CNY100 (extra CNY60 for a round-trip cable car).
Opening time: 08:00-17:00.
How to get there:
- Depart from Luoyang (洛阳): take tourist coach to Shaolin Temple (less than 2 hours) at the east of the Luoyang train station;
- Depart from Zhengzhou (郑州): take a coach to Deng Feng (登封)(about 2 hours) at the bus station on the opposite of Zhengzhou train station, and then transfer minibus to Shaolin Temple (about half an hour).
Best time for visit: in spring and autumn.
Recommended food in Shaolin Temple: Shaolin cookies (少林素饼), and Mt. Song mustard (嵩山芥菜).

Tips:
It is a Shaolin Kungfu Hall beside the gate of the temple that provides free Shaolin Kungfu shows every afternoon at integral points, generally at 15:00, 16:00 and 17:00.

Inscribed as a key national Buddhism monastery in 1983, Shaolin Temple, or Shaolin Monastery of Zhengzhou enjoys a great reputation for over 1000 years since Tang Dynasty (618-907). It is the birthplace for both the famous Martial Arts of Shaolin and the Chan sect of Chinese Buddhism. Approved as a 5A tourist attraction in 2007, the Shaolin Temple set a background against a Wuru Peak, and enjoys a natural barrier by right of surrounded multipeaked mountains and beautiful sceneries. The temple is so named as Shaolin just because it is seated in the hinterland of Shaoshi Mount, and hides in the thick forest (called as Lin in Chinese). A renowned temple in China with a history of over 1500 years, Shaolin Temple additionally boasts for 11 historical architectures which are world cultural heritages approved by UNESCO. 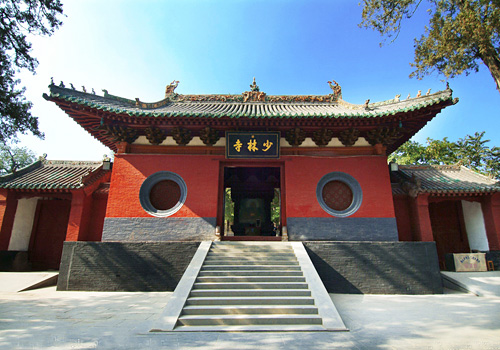 Shaolin Temple was originally built in 495 in the Northern Wei Dynasty (368-534); 32 years later, an Indian monk named Bodhidharma arrived in Shaolin Monastery and from that time on, the temple was expended gradually with increased monks and greatly boosted reputation. Bodhidharma is then the primary ancestor of Chan and hence, Shaolin Temple is the birthplace of Chan. For over 1500 years, Shaolin Temple has developed with twists and turns. The temple was firstly destroyed in the Northern Zhou Dynasty (557-581) due to the prohibition of Buddhism, and was rebuilt dozens of years later but changed a name as Zhihu Temple. Sui Dynasty (581-618) was a period that Buddhism got a great development and the temple was renamed as Shaolin again which then became a large Buddhism monastery in North China with expanded territory endowed by the government. In early Tang Dynasty (618-907), Shaolin Temple was well developed under preferable policies because of the great help offered by Shaolin monks to the emperor Tang Taizong to exterminate separatist regimes; while in later of Tang Dynasty, the emperor Wuzong restricted the Buddhism that the temple was weakened again. Though repaired somewhat in Song Dynasty (960-1279), Shaolin Temple did not recover till 1312 in Yuan Dynasty (1271-1368). The emperor assigned a monk to take charge of Shaolin Temple, which was ordered a commander of other monasteries in Mt. Song area. As a result, a great many of monks came to Shaolin Temple to learn Shaolin martial arts and follow the Buddhism. Unfortunately in the later of the same dynasty, monks were scattered because of the peasant uprising. Ming Dynasty (1368-1644) also made great contributions to the development of Shaolin Temple, and according to historical records, there are totally 8 princes became a monk in Shaolin Temple. Unluckily, due to the war in modern time during the first half of 20th century, main buildings were destroyed and many precious sutras and dates were burned into ashes.

Main architectures in the temple of Shaolin 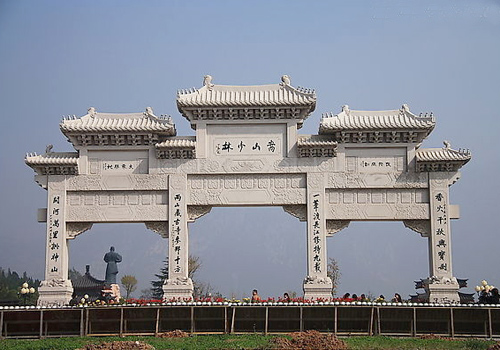 - Shanmen (Gate of the temple)
It was built in 1735 and renovated in 1974; the overall structure of the gate is in great harmony with two symmetrical stone honorific arches and each with characters to praise the Buddhism, Chan or the temple. On the top of the Shanmen is a horizontal board with the name of the temple, which was inscribed by Emperor Kangxi of Qing Dynasty (1644-1911) with his seal sign in the middle. By the two sides in front of the gate are two stone lions made in Qing Dynasty.

- The Hall of heavenly Kings
Located at the end of the forest of steles, the hall got its name from the four enshrined heavenly kings in it. The hall is tranquilly with red walls and green tiles, archways and paintings as well as two statues of Buddha’s warriors. From the Shanmen to the Hall of Heavenly Kings, it is a long paved path with green pines, verdant cypresses and steles on both sides. Apart from these 20 steles, in the east of the path, a galley exhibits other over 100 steles which were built from Tang Dynasty to Qing Dynasty.

- Mahavira Hall
It is the center for main activities of Shaolin Temple, and regarded as the Three Halls together with the Hall of Heavenly Kings and Classics Hall. The original hall was destroyed in 1928 in wars, and the present one was built in 1986. This hall is home to statues of Sakyamuni, Bhaisajyaguru and Amitabha. In the center of the hall is the inscription given by Emperor Kangxi, at the back of the screen is a Avalokitesshvara statue, and at its two sides are the eighteen disciples of the Buddha. The whole architecture was built in rational construction, present as imposing and majestic. 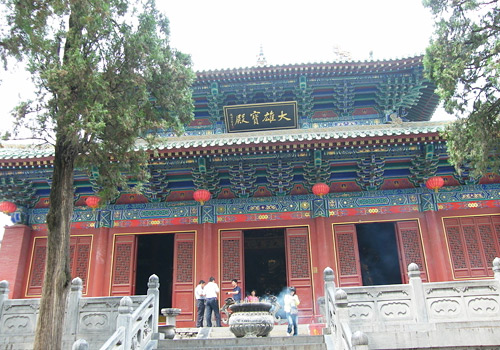 - Bell Tower and Drum Tower
Located at two sides of Mahavira Hall respectively, the eastern one is the Bell Tower and the western is the Drum Tower. Both are 4-stoery buildings with ingenious shape but towering and magnificent. Previous towers were also ruined due to the war in 1928, and present buildings are built respectively in 1994 and 1996 in accordance with their former appearance.

- Lixue Hall
It was built in Ming Dynasty and renovated in 1980. According to legend, it is the site that the second ancestor of Chan named Huike broke his arm and stood in snow field to beg for an impartment from Bodhidharma. The enshrined bronze sitting Bodhidharma in the pavilion was made in 1531 and the horizontal board above was inscribed by Emperor Qianlong of Qing Dynasty. Today, the hall is the site for daily Buddhist activities.

- Thousand-Buddha Hall
Standing behind the Lixue Hall, it is the backmost hall of Shaolin Temple. The murals in it are special famous with beautiful colors and harmony composition, representing the top level painting of Tang Dynasty. In this hall, bronze Bharhut and white marble Sakyamuni are also enshrined.

- Abbot Room
It is the room of abbot for both daily life and works. It was once the bedroom for Emperor Qianlong during his short stays in Shaolin Temple. In the room, there is a bronze Bodhidharma and a bronze Maitreya. A painting on the wall is a rare arttreasure which portrays vivid image with fine and smooth lines.

What to see in Shaolin Temple? – Rich cultural relics and the Forest of Towers

Historical and cultural relics in Shaolin Temple are rich; there are over 500 murals made in Ming Dynasty and valuable steles and stone inscriptions. Most important steles and stone inscriptions in the temple are the ones gave by the Emperor Taizong (599-649) and Emperor Wuzetian (624-705, the only female emperor in Chinese history) of Tang Dynasty. 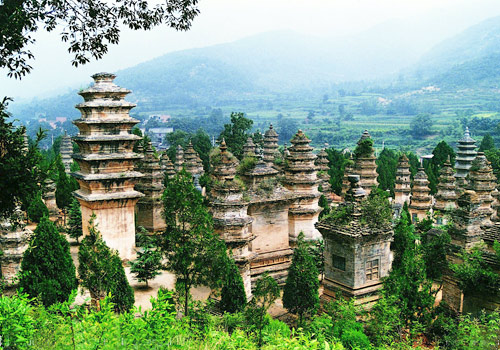 The forest of towers is located in the west of Shaolin Temple at the foot of a hill. Covering about 20 000 square meters, it is the existing largest one in China. There are over 230 towers in the forest of towers which were built from Tang Dynasty (618-907) to Qing Dynasty (1644-1911). These ancient towers are tombs of eminent monks from Shaolin Temple of various dynasties. Though in diverse styles as built in different times, they are all graceful in shape and made with exquisite skills. Most tower inscriptions refer to the martial arts of Shaolin and the cultural exchange between China and other countries in ancient society. With the earliest one built in 791, the forest of towers of Shaolin Temple was approved a key cultural site protected under the state and was included into the largest ancient towers complex list by World Record Association.

Martial arts of Shaolin, or Shaolin Kungfu is the first should be mentioned as well as the largest school among Chinese Kungfus with its over 700 kinds of series of skills. World known for superb skills, the word Shaolin is also the symbol of traditional martial arts of Chinese nation. 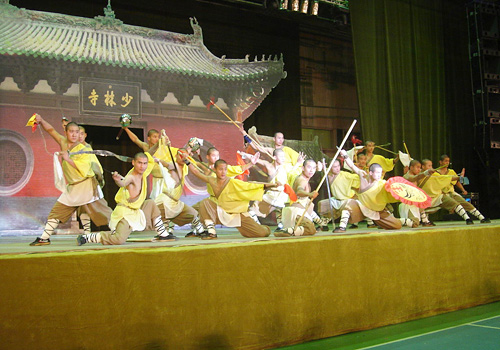 Shaolin Kungfu is an integrated one with famous top 72 unique skills, and kinds of Chinese boxing, cudgel play, spearplay, sabreplay, and swordsmanship.