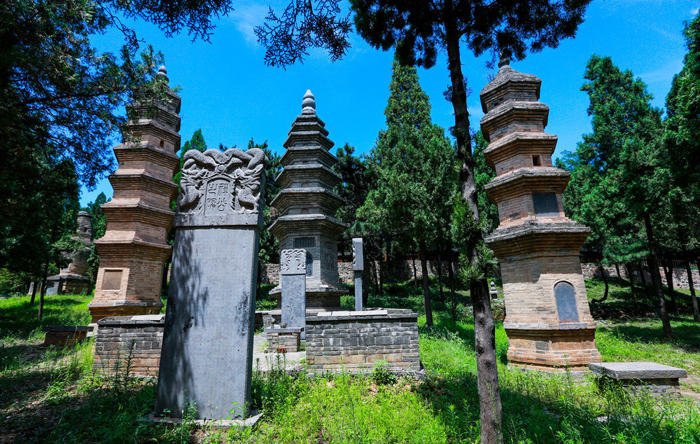 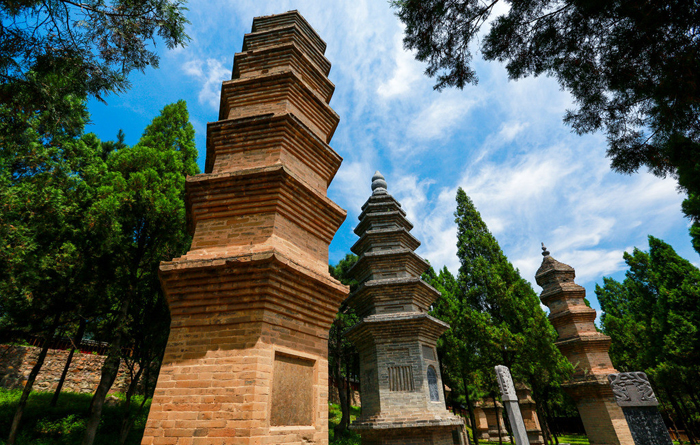 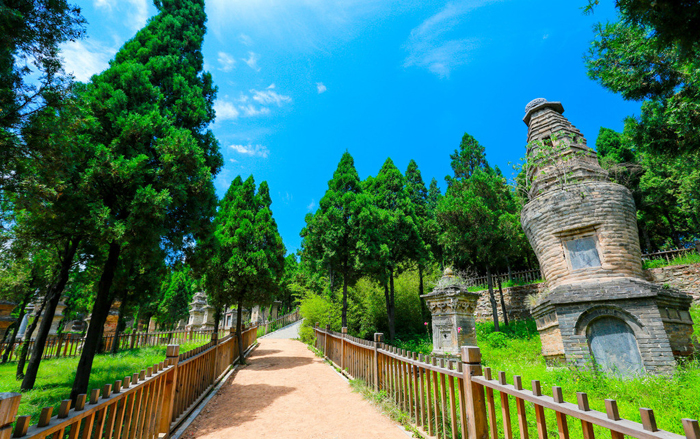 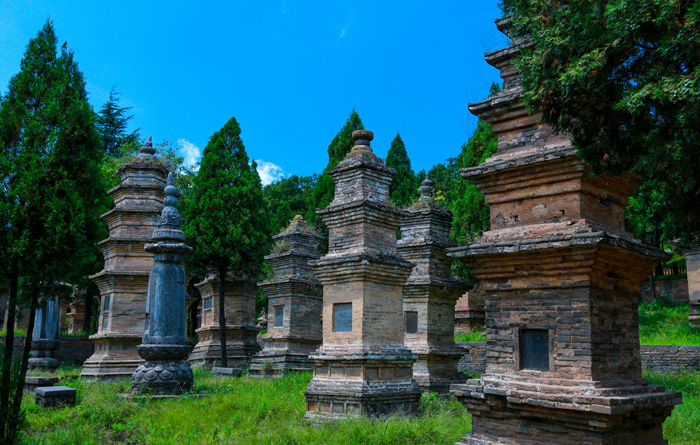 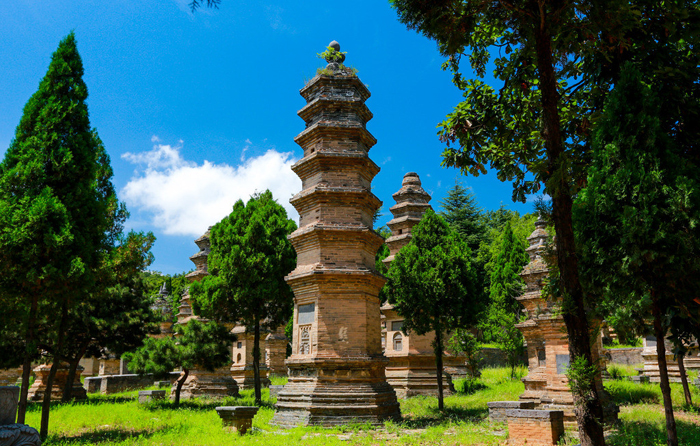 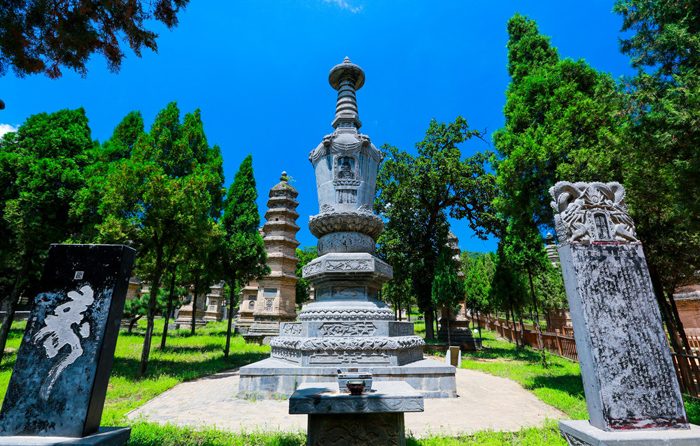 Introduction to Forest of Dagobas of Shaolin Temple

Located in the west of Shaolin Temple, the Forest of Dagobas, a significant part of Shaolin Temple, is the ancestors’ graveyard, consisting of eminent monks' dagobas of past dynasties. Covering about 21 000 square meters, the Forest of Dagobas of Shaolin Temple is the existing largest among the Four Greatest Forests of Dagobas in China (the other three are the ones in Lingyan Temple, Fengxue Temple and Qingtong Gorge), and a World Heritage Site recognized in 2010 by UNESCO. It is a grandiose architectural complex, a precious treasure in the researches for Chinese architectural history, art history and the history of religion, and a hot tourist attraction for visitors from domestic and overseas. 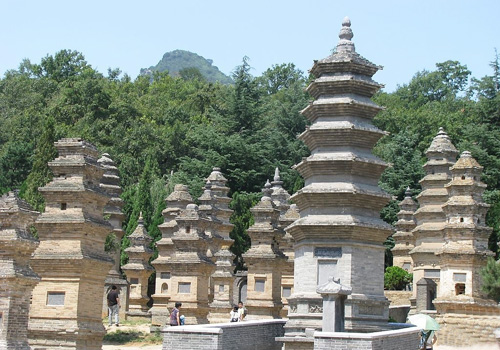 With 232 dagobas which were built from Tang Dynasty (618-907) to Qing Dynasty (1644-1911), the Forest of Dagobas in Shaolin Temple is the existing largest in the country in coverage, quantity and value. The dagobas were built with bricks, stones or combined with both. There are 2 dagobas of Tang Dynasty, 2 of Song Dynasty (970-1279), 10 of Jin Dynasty (1115-1234), 46 of Yuan Dynasty (1206-1368), 148 of Ming Dynasty (1368-1644), 2 of modern times, and others are of Qing Dynasty or not quite clear in building times. The shapes are monolayer with single eave, monolayer with tight eaves, Indian stupas, and kinds of lamaist pagodas. Though in diverse styles and built in different times, they are all graceful in shape and made with exquisite skills. Most inscriptions on the pagodas refer to the martial arts of Shaolin and the cultural exchange between China and other countries in ancient society.

Main dagobas in the Forest of Dagobas in Shaolin Temple

In Buddhist circles, when a renowned monk pass away, his bone ash or skeleton will be buried in underground palace, above which a pagoda will be built. In a general way, the height, size and layers of the pagoda are determined by the monk’s prestige, merits and virtues, and the attainments in Buddhism. The numbers of layers ranges from one to seven, the total height less than 15 meters, and the shapes are square, hexagon, octagon, cylinder, vertebrae, rectilinear, parabolic, bottle-like, tubaeform, pavilion-style, and the like. 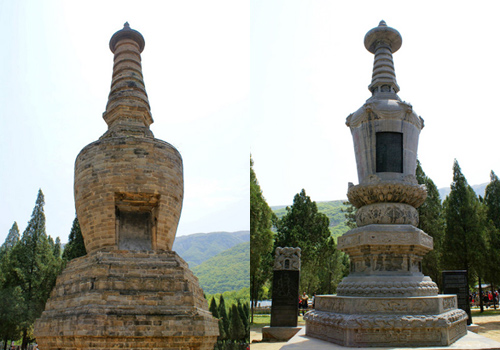 Fawan Chan Master’s Dagoba is the most ancient built in 791 in Tang Dynasty. The 8-meter-high is a brick-structure, square monolayer with single eave located in the northwest of the Forest of Dagobas. The gate, top and the inscription are engraved in bluestone, and the gate is of high relief decorated with ancient pattern of flying Apsaras, Gadamer, etc.

The Zhaogong Monk Pagoda is in the central of the forest built in 1339 in Yuan Dynasty. It is a brick-structure, monolayer with five layers of eaves and a graceful shape. On its back is a stone inscription which was wrote by Japanese monk Shao Yuan (1295-1364).

Yugong Dagoba for Fu Yu Monk, also in the central part of the forest, is a hexagon brick pagoda with 7 layers. Fu Yu is the best known Buddhist abbot in Shaolin Temple in Yuan Dynasty. After his death, he was titled as Guo Gong (literally the man of the county, is the highest title in Chinese feudal society); he was the only one earned that title in Shaolin Temple in the history. Due to his great contributions in reviving Shaolin Temple, which can match that of the founding of Shaolin Temple, the Shaolin monks erected a stone tablet in front of his dagoba.

Tours including Forest of Dagobas