Located in southeast of Guilin City, Guangxi Zhuang Autonomous Region, Yongfu County is known as a Longevity Village. There are over 36 centenarians among ten thousand people, beyond the number recognized in the evaluation standard of a Longevity Village. The secret of longevity of Yongfu locals lies in the area’s high quality water and soils that contain selenium. Yongfu is rich in local specialties, such as Siraitia Grosvenorii, silkworm, mushroom, agarics, Chinese chestnut. It is awarded by National Ministry of Agriculture as Hometown to Siraitia Grosvenorii (Luohan Guo, its fruits can be used for making tea and in Traditional Chinese Medicine) which contains large amounts of selenium and has long been enjoying the name of Magical Fruit of the East and Fruit of Longevity. Yongfu has jurisdiction over nine towns and 97 villages with a colorful mixture of Han, Zhuang, Yao, Hui and other nationalities. It enjoys a good location, being 22 kilometers from Guilin Liangjiang International Airport, 45 kilometers from Guilin and 108 kilometers from Liuzhou, the largest industrial city of Guangxi. Besides, its extensive network of highways and railways brings people from and to other major cities of Guangxi. In addition, endowed with green mountains and limpid water, Yongfu has plentiful tourism resources that few people outside the province have heard of, let alone visited. Thankfully, the unsung beauty has been unveiled in recent years. The Yongfu Cave (永福岩), Heaven Cave (天坑), Jin Zhong Hill (金钟山) is seeing more and more tourists. 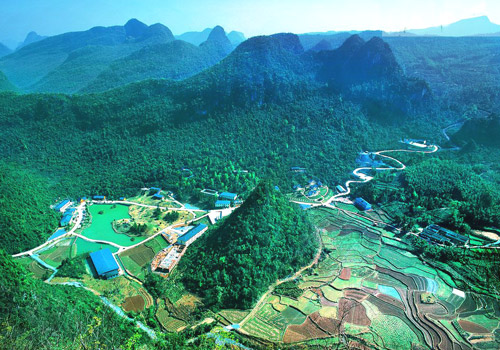 Yongfu in history was a small county that had frequently changed hands, in turn administrated by Guilin prefecture and Linling Prefecture. Yongfu has long been known as a Longevity Village since ancient times. A local old saying goes that: rice paddies here are free from floods and droughts, and centenarians can be seen in every ten miles. According to historical records, the oldest person in history of Yongfu is Liao Fushou who lived to 158 years old. 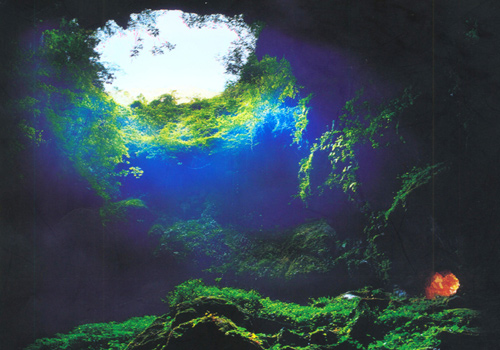 Farming has been the pillar industry of Yongfu. It was awarded with titles of Hometown of Luohanguo, Green Vegetable Producing Base, Green Fruits Producing Base, and High Qualities Grains Producing Area and so forth. In recent years, it has been listed as one of top cities with fastest-growing competitiveness. More importantly, its natural landscapes and wonders have drawn more investors and visitors. Yongfu has a typical karst landform, which spawned the honeycomb of the peaks and caverns. The Heaven Cave, which is the only funnel-shaped cave that can be reached from bottom in the world, is a geological wonder. With the discovery of Heaven Cave, the Jin Zhong Hill, where the Heaven Cave is located comes to light. A Jingzhong Hill Holiday Resort has been completed to serve people with golf course, racecourse, natural spa and Longevity Palace. Some new scenic spots have been recently developed, such as Banxia Lake (板峡湖), Qilin Mountain ( 麒麟山) Scenic Spot, etc.