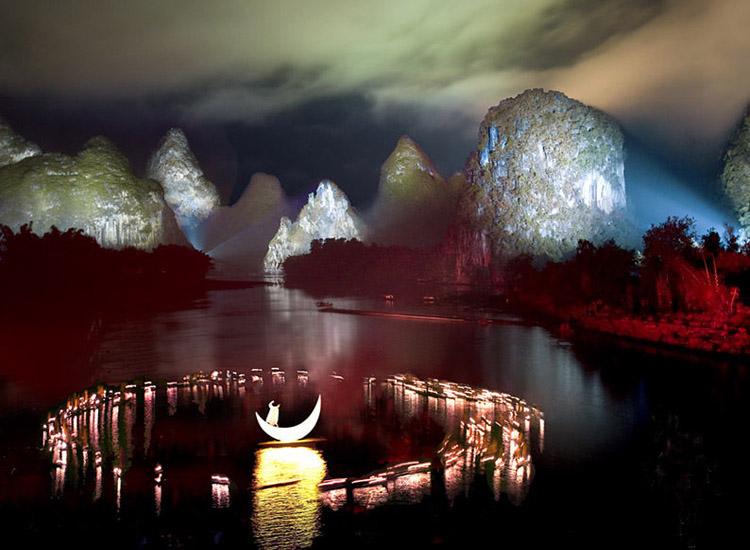 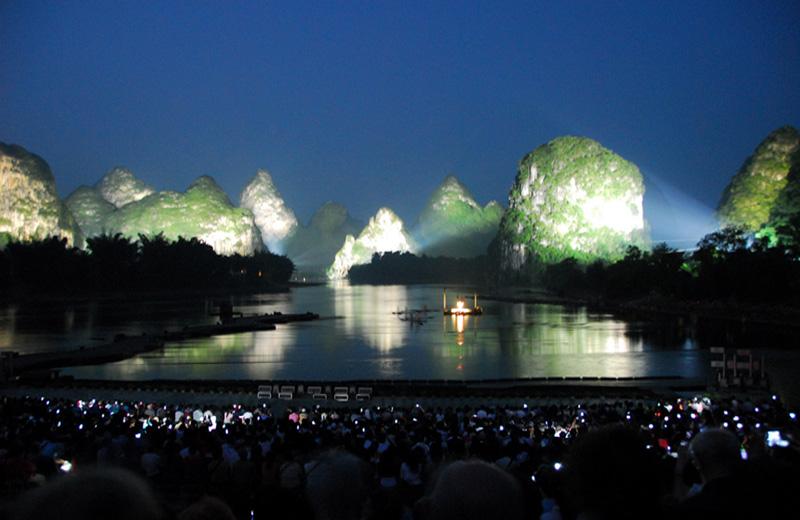 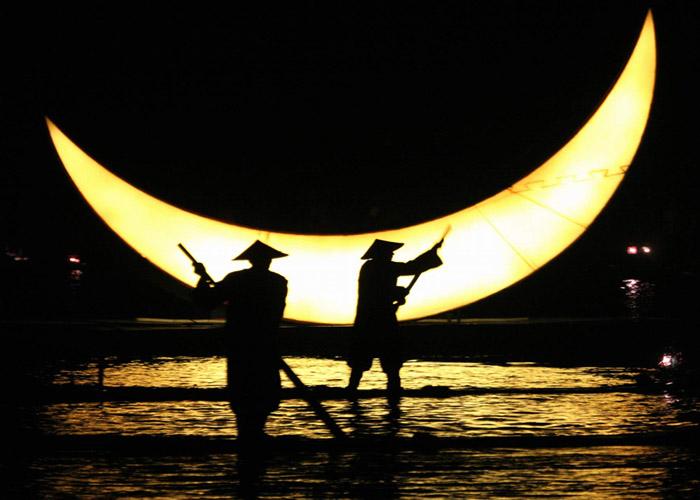 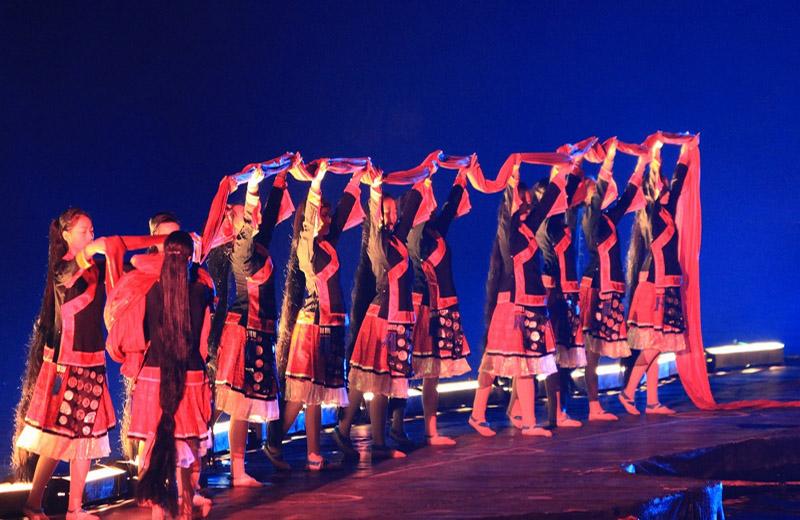 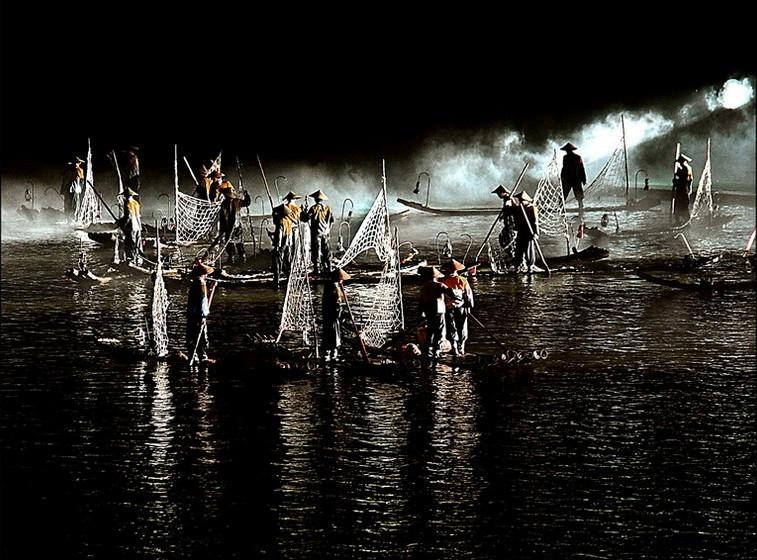 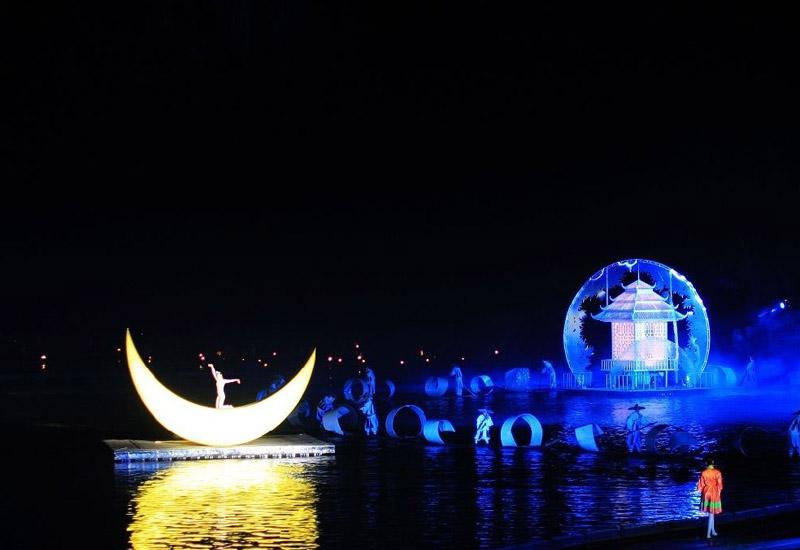 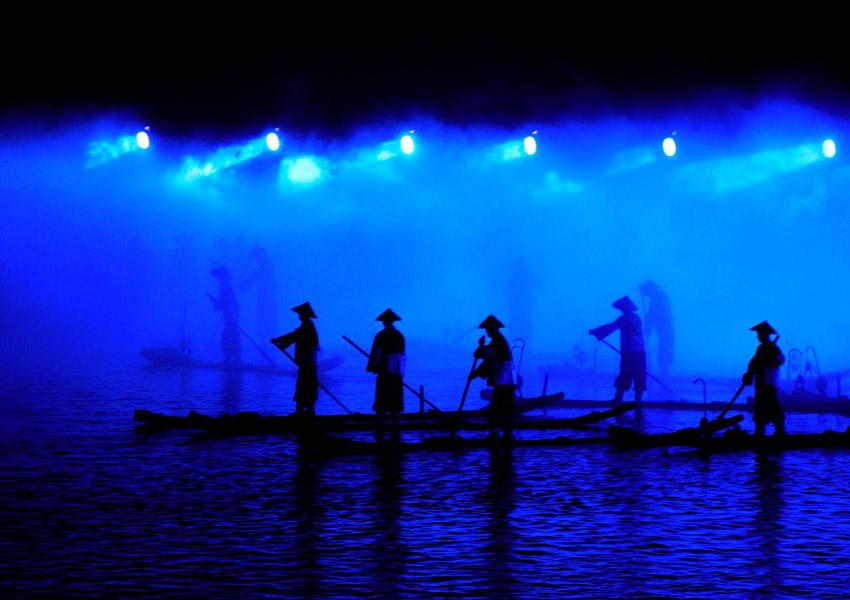 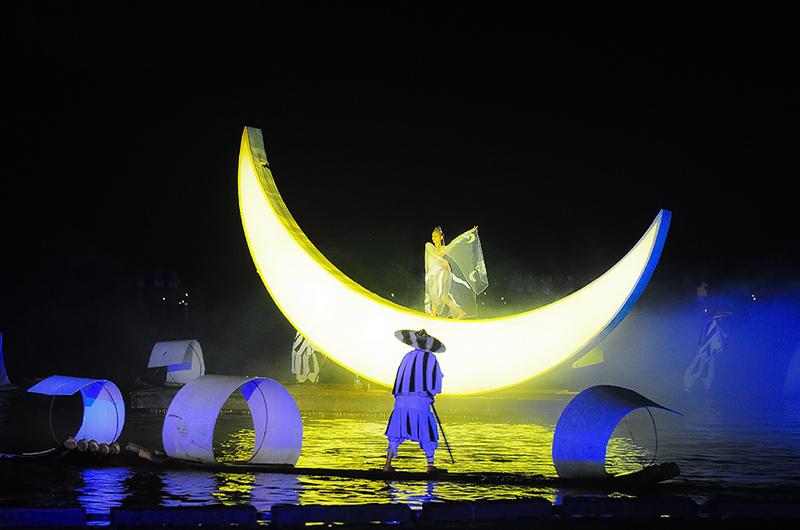 
Chinese name: 印象刘三姐 (Yinxiang Liu Sanjie), directed by Zhang Yimou.
Location: by Li River, Yangshuo County, Guilin City, Guangxi Zhuang autonomous Region (aka Guangxi Province).
Features: the largest stage set in natural landscape & the most unprecedented expression of Zhuang folk songs in the world.
How to get there: by mini public buses or on foot (about 1 km from the West Street).
Entrance fee: 188 Yuan, 238 Yuan, 328 Yuan, 688 Yuan (The prices of the tickets depend on the distance between the auditorium and the stage, normally the farther the more expensive. There are some locals selling "stand tickets" at cheap prices of 20-50 Yuan, but it is not suggested for tourists to buy them considering of security).
Duration: 1 hour
Show time: Normally, the show is put on ONCE ONLY in the evenings from Monday to Friday, and TWICE in the evenings of Saturday, Sunday and "golden weeks (May Day & National Day)". But the show might be ceased if the weather did not permit (e.g. rainstorm, thunderstorm). The show times as below are for reference, the actual time is subject to the real situation.
- In spring: 20:15 – 21:15, 22:05 – 23:05
- In summer: 20:00 – 21:00, 21:50 – 22:50
- In autumn: 19:40 – 20:40, 21:30 – 22:30
Tips:
- It is advised to enter to find your seat in advance.
- It is suggested to take along anti-mosquito spray if it is in summer.
- Audiences will get raincoat for free if it rained.

Directed by Zhang Yimou, the most famous Chinese director, Impression Sanjie Liu is designed to be the core part of the Splendid Li River · Folk Song Fair of Sanjie Liu Scenic Area, consuming a producing time of five years and five months and covering a water area of 1.654 square kilometers. Back against 12 peculiar karst hills on the Li River with bright and colorful lighting, this gorgeous on-water show assembles the picturesque scenery of Li River, the great achievements of the ethnic culture of the Zhuang, Miao, Dong and Yao minorities, and the inspiration of 67 Chinese artists. All of the actors and actresses (exceeding 600) are local people, who grew up by the Li River and perfectly show the emotion between the local nature and themselves in the performance. Thanks to the endowed natural stage, Impression Sanjie Liu is hailed as "a cooperative masterpiece by human being and the God". 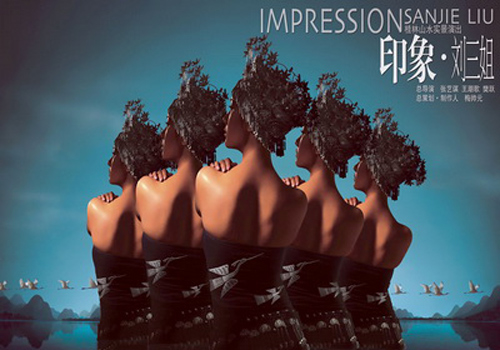 After its first formal show on March 20 of 2004, Impression Sanjie Liu gained a high comment from an official of World Tourism Organization that "it is a show worthy of a trip from any corner of the world" and then became "a best scenic spot for relaxation and holiday" proposed by the organization.

Reputed as "the queen of folk songs of Zhuang ethnic minority", Liu Sanjie has been being admired by the Zhuang minority since the ancient times. She was a brave Zhuang lady who was very good at singing folk songs and not scared of the bad landlords. Under great oppress from the lords, Sister Liu fought with the poors against the lords by her songs. From generation to generation, she was respected by the Zhuang people; even nowadays some of her songs are passed by and sung. 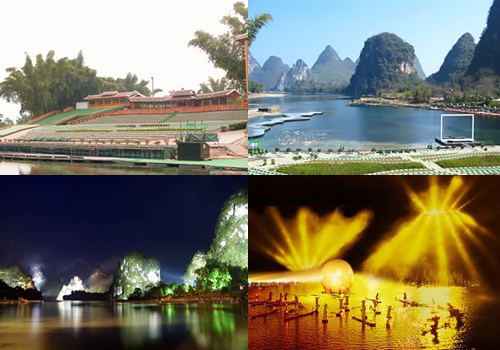 - Chapter 1: The Preface
The whole stage almost gets totally dark and audiences cannot see anything else on the stage but the image of Sanjie Liu indistinctly on the sky accompanied by the music of "Sing the Folk Song" – a pleasant Zhuang folk song widely known to Zhuang people even the whole country. Then the famous 12 peaks irradiated by colorful lights will come into audiences' eyes, with a small fishing boat rowed from a distance. 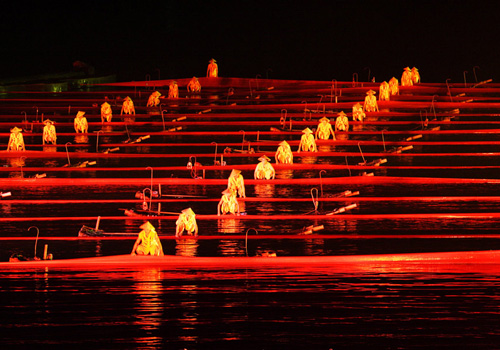 More bamboo rafts are rowed on the Li River in a column by fishmen, who squat or stand with large red silk upon the water or in the sky. The red scene indicates and praises the local's enthusiasm on farm work.

- Chapter 3: Green Impression (Homeland)
The circumstance turns from red to green, which symbolizes nature and vitality. Smoke of cooking fires curl up among the green hills and water and herders return home with their cattle under a ray of light from the sunset, and women washing clothes by the river are waiting for their husbands who are rowing the fishing bamboo rafts back home. This scene shows the peaceful and happy life of the local.

- Chapter 4: Golden Impression (Fishing Lights)
The many rafts with golden fishing lights spread on the river, making the lights shake slightly, which forms a nice picture together with the straw rain capes, frolic cormorants and the natural landscape. This is another portrayal of the local life by the Li River. 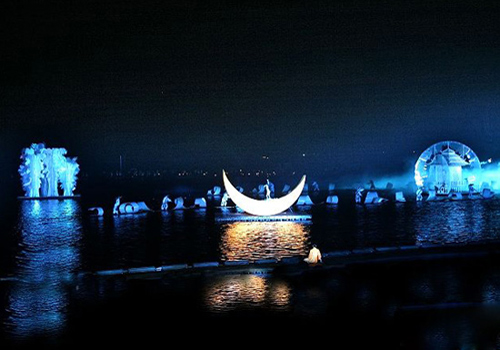 "Sanjie Liu" starts to sing classical Zhuang folk songs, which linger under the dark blue sky. A crescent-shaped boat with a dancing fairy flies slowly onto the surface of the river, and a group of young girls dressed in red or white bath around it. The girls are just like the musical notes of Sanjie's songs in this blue world. 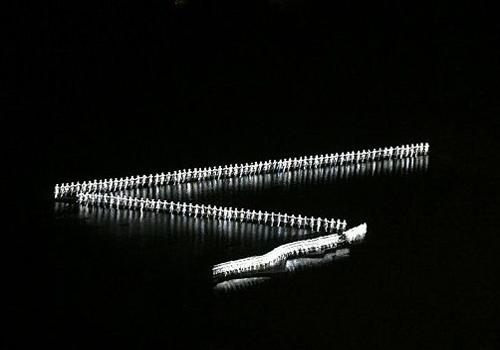 More than 200 Zhuang girls dressed in silver with silver adornments stand on the river, making it shimmer. Also entitled "Wonder of Li River Culture", this chapter shows the traditional ceremony in Sanjie's hometown according to the legend.

- Chapter 7: The Epilogue
The bamboo rafts are rowed again and get further and further away from the audiences while the pleasant songs of Sanjie keeps echoing among the hills and water. And the girls express their thanks by fair-sounding Zhuang folk songs.

Tours including Impression of Sister Liu