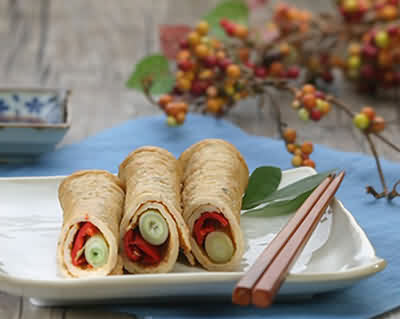 Xining is a city with a mix of ethnic groups including Tibetan, Hui, and Salar. The food tends to be salty and food preparation is relatively simple compared with those of other cities. However, due to ethnic influence, the food is unique and good using native products and traditional culinary workmanship. Many ethnic snacks are affordable and delightful, such as Boiled Mutton, Yoghourt, Niangpi, etc.

Finger Mutton (手抓羊肉)Boiled Mutton is also called Finger Mutton or Mutton Eaten with Fingers because people often eat them with fingers and another hand using knife to separate meat from bones. It is the traditional food of herdsmen in Qinghai. Boiled Mutton is cooked simply with a small spoon of salt. The mutton is tasty, fresh, tender and not greasy or smelly.

Yoghourt (酸奶)Yoghourt is a must-try when you travel in Xining. Different from what we often find in supermarket, Yoghourt of Xining is often in a solid state. However, it is extremely fresh and tender with a layer of cream on the surface. The flavor is fresh and appetite-boosting.

Niangpi (酿皮)Niangpi is a popular snack made of flour which is kneaded and then steamed, sliced and served with vinegar, chili oil, mustard, mashed garlic. It can be found almost anywhere in Xining.

Boiled Innards Soup (Zasui Tang,杂碎汤)Its unique flavor has made it the traditional breakfast of Hui ethnic group. Inner organs of lamb and oxen are shredded and then thoroughly boiled in a soup stock with seasonings such as salt, green onion, ginger, garlic, etc.

---Mo Da Jie (Modajie Street near the Dong Dajie Road in Western District of Xining) Mojiajie Street is the oldest gourmet street in Xining. The most famous restaurant should be Mazhong Restaurant where a great variety of food can be found. It is bustling with booths providing snacks, fruits, and even souvenirs.

---Shui Jin Xiang (Shuijinxiang Walking Street in Middle District of Xining) Shui Jin Xiang is an old commercial street. Almost all dishes and snacks of Xining can be found on this street. Located in central Xining, it packs all Xining foods such as Roasted Mutton, Bean Jelly, Boiled Mutton, etc.