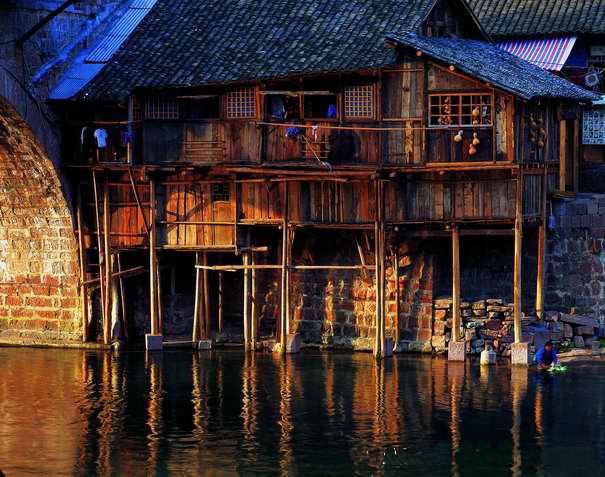 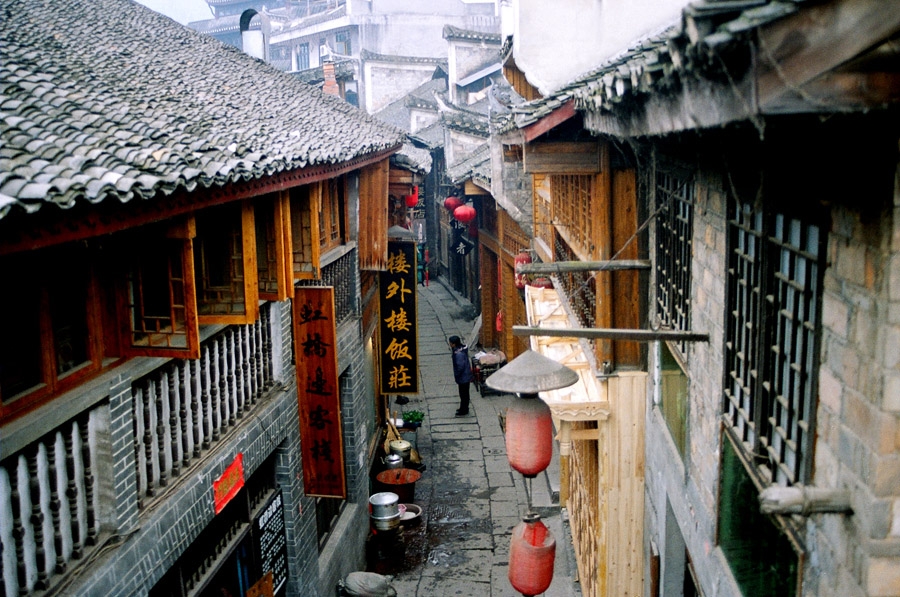 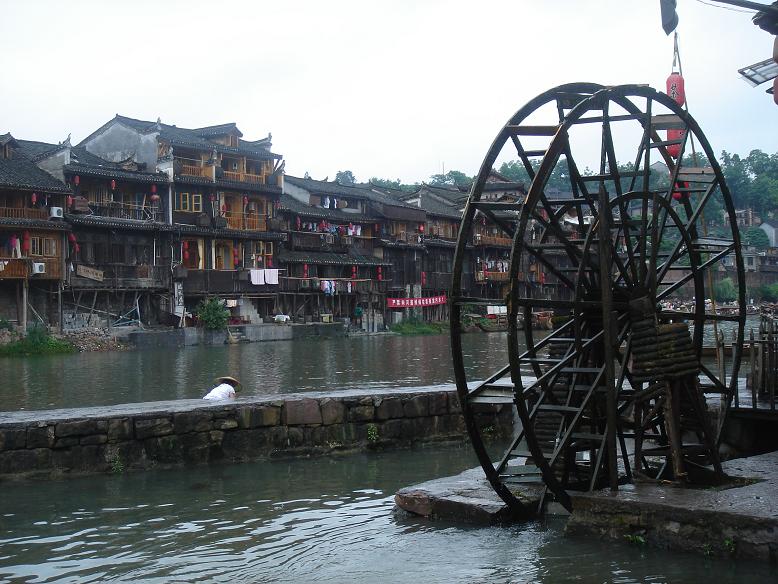 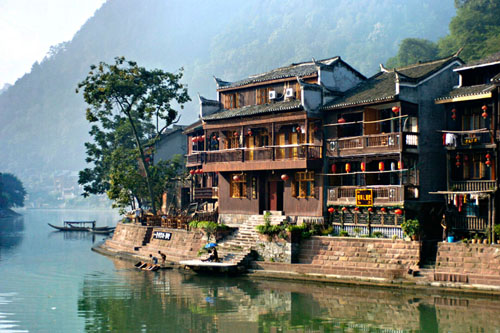 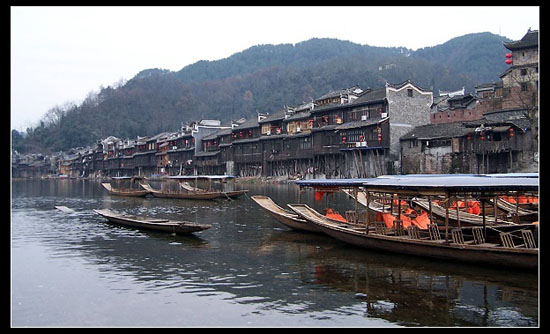 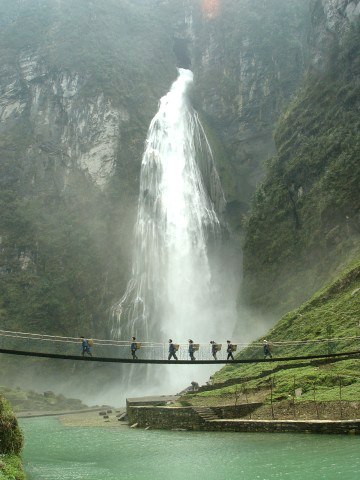 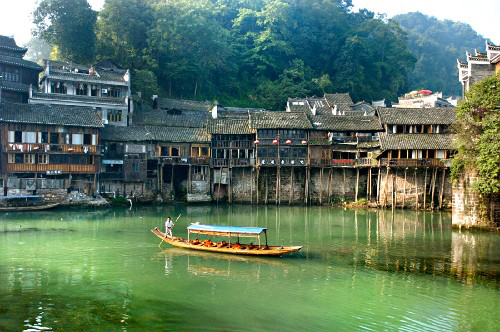 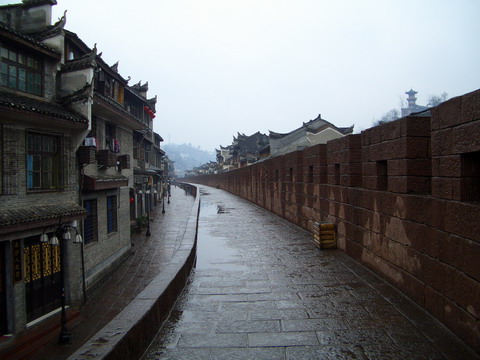 
Chinese name: 凤凰古城 (Fenghuang Gucheng)
Location: The Fenghuang Ancient Town is a small county town located in Xiangxi Tujia and Miao Minorities Autonomous Region (western part of Hunan province).
Admission fee: The Admission fee for the ancient town is divided into different packages. One is RMB248 yuan (for top 11 attractions at Fenghuang, 9 inside the ancient town and 2 outside), the other is RMB138 yuan (for the Fenghuang Ancient Town only).
Validity of the admission ticket: 48 hours.
Best Season to travel to the phoenix town: All year round.
Recommended time for a visit: 1 to 2 days. 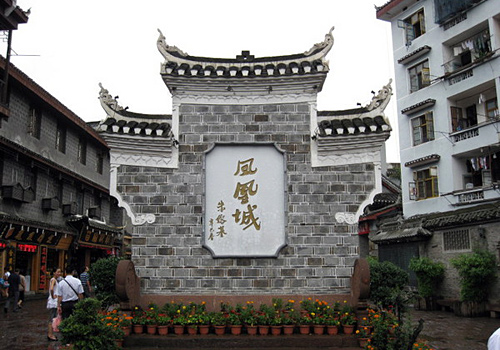 Visitor can also get to Fenghuang city from Jishou (northeast from Fenghuang) or Wulingyuan Scenic Area (Zhangjiajie) by shuttle buses, usually the final bus leaving for Fenghuang is no later than 18:30 in the afternoon. 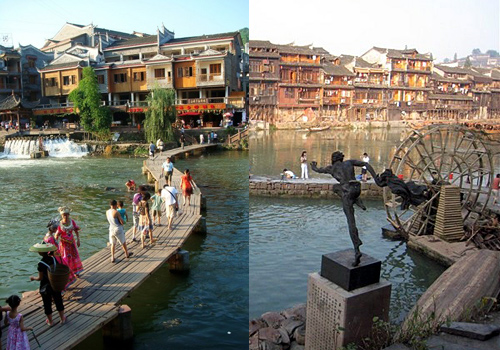 The ancient town of Fenghuang also means the Phoenix Town in China; it was described as the most beautiful town in China by the Zelanian writer Louis Aileen. The town is the only path between Huahua, Jishou (Hunan province) and Tongren (Guizhou province) and a must-visit place to enjoy the real amorous feelings of the west part of Hunan province.

The town is very small with only a main street; however, it is a green corridor and charming place. It is located on the river bank of Tuojiang River (Tuojiang, 沱江), the small town was once the rallying point for politicos, warlords, bandits, and the local Miao minority people, we should say it was once a standard "barbarian" land.

Main Attractions and interesting things to do:

- Tuojiang River: Tuojiang River is the mother river of the ancient town of Fenghuang, getting on the local black-awning boat (pronounced Wupeng Boat in Chinese), enjoying the folk songs sung by the helmsman, watching the featured Diaojiao buildings all along the river bank, boating downstream and crossing the Rainbow bridge, all make guest feel like touring in a scroll painting.

- Gate towers: Four ancient city gates exist in the town, the East Gate Tower was built by red sand rocks and it is of the same importance as the North Gate Tower, the gates protected the town a lot in ancient time.

- Former residences: People started to know the Phoenix Town from one famous Chinese writer – Shen Congwen (沈从文). Mr. Shen was born here in a classic ancient quadrangle courtyard at Fenghuang town. Except from the Former Residence of Shen Congwen, visitors may also look around the Xiong Xiling’s Former Residence, Mr. Xiong Xiling (熊希龄) was called ‘the wonder child of Hunan province’ and he was elected as the first elected Prime Minister of the Republican period in 1913.

- Ancestral hall: The Ancestral Hall of Yang Family was built in 1836 and located in the northeast of the ancient city wall of Fenghuang, people may marvel at the fantastic designing and work of the hall.

- Hongqiao Wind and Rain Bridge: The bridge has three arches, the height from the river surface to the top of the bridge compares a couple of floors. Mr. Huang Yongyu’s (born in Fenghuang and famous for his print making) left his antithetical couplet on the bridge and left the world with imagination and wonders. The second floor of the bridge is used for receiving importance guests and exhibiting calligraphies and paintings. 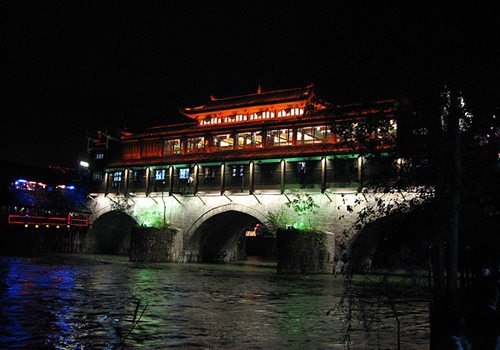 - Other attractions: Plenty of attractions are available in or around Fenghuang town as it is a very commercial tourism area, the Wanshou Palace (palace for tens of thousands years), the Diaojiao Buildings along the Tuojiang (means the suspended buildings or wooden buildings surported by several wooden pillars), the South Great Wall, Huangsiqiao Ancient City, rafting, fishing, etc.

1. Never open your umbrella while visiting the local peoples’ houses and don’t step on the door sills.

2. Male and female can not sleep in a same room when spending overnight as a guest. Don’t sucking up to the married women in the town or whistle as they believe it is only an asking for trouble and offend the ghost.

3. Coins can not be used in the ancient town so please bring paper money.

4. Aware of the travel traps. Taps are everywhere can be found although people will not force you do something. Take care for the butter-tonsiled drivers, service suppliers and never trust on cheap tickets or the so-called perfect extra itineraries. Don’t accept the free services or gifts like the joss sticks and candles burning at a temple as you will finally pay a lot for it. 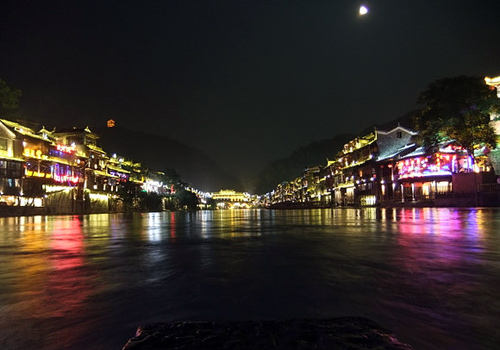